Can Turkey be a model for Arab democracies? As Islamist parties come to power in free and fair elections in Morocco, Tunisia and Egypt, the“Turkish model” or Turkish democracy under the leadership of the conservative AKP government attracts more attention. But what exactly is this “model”, and how promising is it? Could it work as a guidance or inspiration to Arab countries in their reforms?

Commentator:Anu Leinonen, Executive Officer, Foundation of the Finnish Institute in the Middle East

The speaker, columnist Mustafa Akyol began by asking the question why Turkish democracy has been discussed as a possible model for the Arab world, particularly after the Arab Spring. In Tunisia and Egypt, the parties that have come to power are inspired by Islam. Will they turn these countries into theocracies? Turkey’s current governing party, the AKP, is also inspired by Islamic values, yet it has not imposed religion. Instead, the AKP has made democratic reforms. The Arab Islamists of the Tunisian Ennahda party have announced their intention to follow Turkey’s example. But how can the success of the Turkish model be explained?

To answer this question, Mr Akyol turned to history. Turkey’s experience with democracy has its roots in the 19th century, when the Ottoman Empire made political reforms inspired by Western modernity. Jews and Christians were declared equal citizens, and Turkey became for a short time a constitutional monarchy with a Parliament. When the Empire was succeeded by the Republic, more reforms were introduced, for example regarding women’s rights. Under Mustafa Kemal Atatürk, secularism was adopted. But according to Mr Akyol, it was still possible for religion to evolve in a civil sphere, without government support. Moderate movements like Sufism thrived, and started to support democracy because of the freedom it offered.

Some Arab countries and Iran have had similar phases of secularism, in which religion was suppressed. Mr Akyol mentioned Nasser in Egypt, and the Shah of Iran whose modernisation policies included banning the wearing of a veil for women. But in these cases, the suppression of religion caused in turn the rise of terrorist movements. In Iran, there never was a transition to a multi-party system, and after the revolution the Khomeini movement actually forced women to wear a veil. The pattern here is that authoritarian single-party regimes oppress Islamic movements, giving rise to radical Islamism. Secular dictatorships are the origin of such organisations as Al-Qaeda, Mr Akyol recalled.

Turkey was different because of its Ottoman heritage. Furthermore, Turkish Muslims were not ultra-conservative Wahhabis as in Saudi Arabia, but represented movements like Sufism. Turkey had also had multi-party elections early on, whereas some of the Arab Spring countries are only now able to organise free elections. The Turkish Kemalist tradition allowed democracy to develop. In the 1950s an opposition party, the Democratic Party, came to power. It managed to incorporate pious people into the society by improving religious freedom. Iranians revolted, but Turkish Muslims realised that they could make a difference by voting.

From the 1960s to the 1980s Turkish democracy was harmed by several military coups, but a new phase began in 1983 when Turgut Özal assumed office as Prime Minister. He began opening Turkey up and liberalising the hitherto protective economy. Laws were also liberalised, and the previous assimilation policy of Kurds began to change. This accelerated the process that eventually led to the AKP “phenomenon”. Mr Akyol pointed out that the religious-secular divide in Turkey has been deepened by the existence of a class conflict between the less privileged observant Muslims and a wealthy secular class. Özal’s economic dynamism allowed an Islamic bourgeoisie to emerge. This new Muslim middle class of hardworking businessmen who have been called “Islamic Calvinists” were not militant, and were in favour of EU accession. This is the foundation on which the AKP was built.

In the 1990s theologians started making statements approving of a secular state. On the one hand, they could see how Western countries functioned with religious freedom. On the other, the example of Islamic states like Iran and Saudi Arabia was not encouraging. What’s more, any Islamic state only represents one particular denomination: Wahhabism in Saudi Arabia, Shiism in Iran. According to Mr Akyol, Turkish clerics also realised that an Islamic state is not necessarily a good idea to begin with: freedom of choice is better for authentic religion than coercion.

Statements by the Turkish Prime Minister endorsing a secular state while visiting Arab Spring countries inspired a new debate in these regions. But why is the Turkish example attractive to Arabs, even to some liberal-minded Islamists? Turkey influences the Arab world in many ways: through TV soap operas and as a tourist destination. Mr Akyol concluded his presentation by saying that while Turkey is right in sharing its experience with the Middle East, it should not turn away from the West.

Anu Leinonen, Executive Officer of the Foundation of the Finnish Institute in the Middle East, commented on Mr Akyol’s speech. She said that the idea of Turkey as a political and economic role model is attractive, but it should be seen as a merely “symbolic” model. It cannot and should not be replicated. After all, Turkish democracy is the result of a 200-year-long process. Turkey also has its own problems, as evidenced by the coups d’état. Ms Leinonen mentioned Mr Akyol’s book Islam without Extremes, in which the author argues that Islam is compatible with a secular state and democracy. The book, written in English, is being translated into Turkish and Arabic. Its reception in the Muslim community remains to be seen.

Dr Hanna Ojanen, who chaired the debate, asked whether Mr Akyol considers religion a sort of soft power contributing to Turkey’s growing international role. Mr Akyol replied that religion is not explicitly used in this way. The reason the Turkish leaders are perceived as Muslim has to do with identity, with their expression of sympathy for the Palestinian people, and with Ottoman nostalgia.

Responding to a question from the audience, Mr Akyol analysed Turkish foreign policy. According to him, Turkey wants to continue the EU process, but there is a lack of enthusiasm because of the state of the Turkish economy, and because of uncertainty about being truly welcome in the Union. Turkey’s relations with Middle Eastern neighbours have changed from a “zero problems” policy after Turkey chose to side with the Syrian opposition against the Assad regime. Mr Akyol sees potential in Turkey for mediation between Iran and the West, and for solving problems in the Middle East through diplomacy.

The Palestinian issue was also brought up. Mr Akyol’s opinion was that the issue is an engine of radicalism, which stems from political problems expressed in the name of Islam. The international system is seen as unfair for letting Israel get away with too much. Mr Akyol hopes for a two-state solution. As for Turkish-Israeli relations, Prime Minister Erdoğan has condemned certain policies but is not categorically anti-Israel. Before 2008 there was cooperation between the two countries; since then the relationship has deteriorated.

Other issues were discussed. One of them was the Islamic Gülen movement that has grown more critical of the AKP government that it has supported. Another topic was the problem of freedom of the press, which is connected to legislation (anti-terrorism laws and a law against insulting Turkishness) as well as to the close ties of media companies to Ankara. 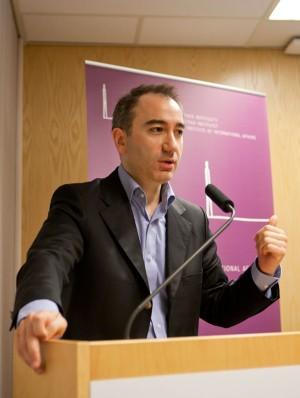 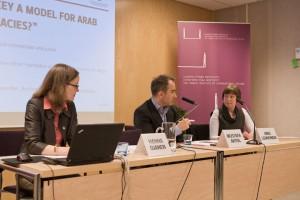