Framsida / Evenemang / Japan in the Arctic: Policies and Priorities
Dela med andra
Dela med andra
For a long time seen as a peripheral frontier with limited amount of human activity, the Arctic region is now undergoing significant changes. The geopolitical and economic importance of the region has grown and region has re-emerged as a component of contemporary high politics. With exciting economic opportunities and serious environmental challenges, the region is increasingly attracting attention not just from the eight Arctic states, but also from non-Arctic Asian actors, such as China, India, South-Korea and Japan. This entails that the Arctic will increasingly be a global theatre and Arctic issues are inevitably going to be decreasingly regional, taking into account policy inputs from actors outside the region itself. The seminar will address and elaborate Japan’s role in this new equation. What are Japan’s Arctic policy priorities and goals? What are the scientific research and business interests of Japan in the Arctic? How could Finland and Japan cooperate in the region?
Speakers:
Professor Shinichiro Tabata, Director, The Slavic-Eurasian Research Center, Hokkaido University, Japan
Assistant Professor Fujio Ohnishi, The College of International Relations, Nihon University, Japan
Comments: Dr Juha Käpylä, Senior Research Fellow, the Finnish Institute of International Affairs
Chair: Dr Harri Mikkola, Senior Research Fellow, the Finnish Institute of International
Summary of the seminar:
Harri Mikkola, Senior Research Fellow at FIIA, chaired the event and presented opening remarks. He introduced the Arctic as a relatively new component of contemporary high politics, and an increasingly global arena. The Arctic has been attracting growing attention not only from the eight Arctic states but also from other global players, such as China and Japan. Japan became an observer in the Arctic Council in 2013, and released its first Arctic Policy last October. But what exactly are Japan’s priorities, goals and business interests in the Arctic?
Fujio Ohnishi, Assistant Professor at the College of International Relations at Nihon University, presented his views on the diplomatic implications of Japan’s Arctic policy.  Japan’s Arctic policy has been in the process of developing toward more active engagement in the region. Japan has been gradually increasing its research as well as other involvement in the region. The National Institute of Polar Research, NIPR, was founded in 1973. In 1990, The Arctic Environment Research Center (AERC) was established. By April 2013, Japan’s Cabinet had adopted the Basic Plan on Ocean Policy, and in May 2013, Japan gained observer status in the Arctic Council.
Specifically, Japan’s Arctic policy can be divided into three initiatives. The first initiative is research and development, including the promotion of Arctic research in order to contribute to policy decision making and to establishing a research network in Japan. The second initiative is international cooperation, and the third initiative sustainable use, referring to the preparation for the utilization of the Arctic Sea Route and natural resources development.
What does Japan wish to accomplish through its Arctic policy from the diplomatic point of view? Professor Ohnishi admitted that his research on the topic has not yet reached final conclusions, but he presented his early thoughts on the matter. Japan’s Arctic policy can be seen as a part of the country’s science and technology diplomacy, itself a diplomatic instrument to enhance soft power.
Shinichiro Tabata, Director of the Slavic-Eurasian Research Center at Hokkaido University, repeated some of the themes discussed by professor Ohnishi, such as the three initiatives of Japan’s Arctic policy. He then continued to focus on Japan’s business interests in the region. Japan’s two most important business interests in the Arctic are oil and natural gas (LNG). Japan is still heavily dependent on the Middle East for oil, but as importing oil from Russia is considerably easier, Russia is becoming increasingly important for Japan. Today Russia is already one of Japan’s most important sources of oil as well as natural gas. Professor Tabata introduced the Yamal Peninsula as the most active frontier of Arctic oil and gas development. Generally speaking, there has been an eastward and northward shift of oil production in Russia.
Juha Käpylä, Senior Research Fellow at FIIA, presented comments on the two presentations and discussed Russia’s role in the Arctic in more detail. He echoed the notion that Russia has become increasingly important for Japan, and that in this recent shift in Russo-Japanese relations the Arctic might play an important role in the future. Yet there are also uncertainties that are related to Russia. Economic development in the Russian Arctic has slowed down as offshore hydrocarbon projects have suffered from the low price of oil and Western sanctions, and as maritime transport has not boomed. Russia also remains the dominant actor in the Arctic with growing military capabilities in the region, and the Arctic Ocean provides Russia’s navy with an uncontested access to international waters. Russia’s military modernization in the Arctic coincides with growing uncertainty over its foreign policy calculus after the annexation of Crimea. So far Russia has been a reliable player in the Arctic, but the country’s commitment to international law and co-operation has been recently inconsistent. If strategically necessary, Russia might diverge also from Arctic co-operation. Although there is no Arctic military conflict in sight, general concern has grown and the security situation has taken a turn for the worse.
After the presentations and the comments, a Q&A session followed with further discussion on Russia’s role in the Arctic, the general security situation in the region, and future collaboration between Japan and Finland. It was emphasized that there currently is no threat of an armed conflict, but that the situation has changed due to Russia’s growing military influence. Both of the guest speakers felt confident that the collaboration between Japan and Finland will deepen in the coming years, though there are challenges to be addressed. 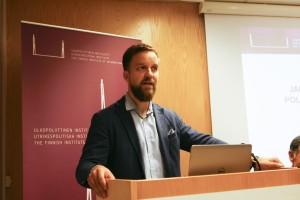 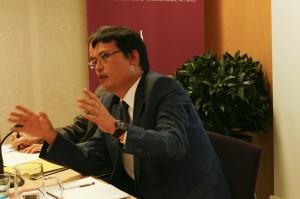 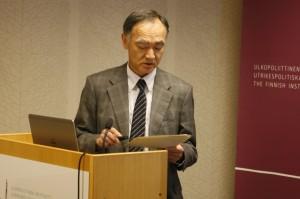 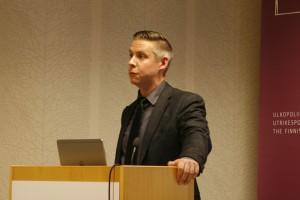 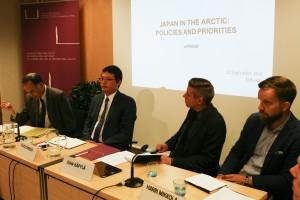