Hubert Védrine, former Diplomatic advisor to the President of the Republic during the time of Mitterrand, Secretary General of Elysee Palace from 1991 to 1995, and the Foreign Minister from 1997 to 2002, visited Helsinki as a guest of the Association of the former Finnish students of ENA in Paris.

Mr. Védrine started his speech by describing the international context. During the cold war everything was clear – we were either in one camp or in the other, east-west. Since the end of Soviet Union, there is no consensus of the world. Instead, we have different “grilles de lecture”, understandings. In 1991 and after, there was a wave of euphoria. We had won the cold war – end of history (Fukuyama). The idea reigned that liberal democracy would be brought everywhere. Huntington raised his voice, however, to remind us that there are other civilizations, there can be clashes. In the 1990s, Huntington showed vigilance when he warned against idea of human progress. By the end of the 1990s, the world seemed more like that of Huntington’s than that of Fukuyama’s. Védrine called us of the neo-conservatism of President Bush.

Védrine reminds us that there are no clear answers to what is the world today: Are we in an international community, in a unipolar world, or a multipolar world … And is this good or bad? What about the multilateralism of the UN? Or, are we in a system which is more chaotic. Or an a-polar world. Chaos? It is characteristic that there are such doubts about the character of our world, instead of just one understanding. There are people who can impose their reading of the world on others, such as the president of the United States. But what do we understand by security in Europe? We have to understand the context and the threats: The administration of President Bush made terrorism a central explanation. Not everybody in the world was convinced but they had not the capacity to reformulate stronger explanations or definitions of the threats.

A different American administration could have reacted differently (against Al Qaida, Iraq…). Different western policies are possible, underlines Védrine. There are, for example, different understandings of the reasons behind the activities of Hamas. Today’s situations should not be viewed fatalistically. USA could have decided to not make war in Iraq. Védrine reminds the audience of the diplomatic skills of Nixon and Kissinger, for example, when handling the threat of China. That was a totally different type of policy from the US policies towards Iran today, Védrine says. Today the US policies only consolidate the hard liners there.

What are the threats for the security in Europe today? According to Védrine, terrorism is not a threat, because terrorists cannot achieve their objectives in the Arab world. They have not been able to change all the regimes in the Arab world. They have not succeeded in their goals today and they will not succeed, emphasizes Védrine. How long will this situation last? Maybe 10-20 years, we do not know, but modernity is stronger than anything, says Védrine. Terrorism is a serious question, but it can be handled by police information technologies, etc. According to Védrine, Bush has ignored the political context that is linked to terrorism. It is a huge mistake to talk about terrorism all the time because that is what the terrorists want. It is tragic that the attention given to terrorism incites new attacks. On the contrary, terrorism should be played down.

Terrorism is not a problem to the west today. The west has dominated the world since 500 years – cf. colonialism. According to Védrine, the west is still a leader in the fields of economy and intellectual life. We know what is right and what is wrong.

USA is still the biggest world power, but new powers are emerging: China, India, and others. We can talk about 15-20 emerging powers, such as Iran (with a different regime), South Korea, Thailand, and Turkey. These countries develop and create global enterprises. The big multinational firms used to be western, but today they can be from elsewhere, too. Big investors come from the Arab world, China, and Russia. We (the Europe) are losing the monopoly of history – the power. Of course, we have not lost influence, but somehow Europeans are not seeing the situation properly. We are still paternalistic: we want to bring good to all people, but these emerging powers will take their place in the global system.

For Védrine, the question number one in terms of security (not in military terms, however) is how we westerners will react in front of the emerging powers – well or not well. The reactions may include worries, militarization, preventive action, even paranoia (which we see today with regard to terrorism) or, as Védrine hopes, calculated policies and strategies. How shall we answer to this threat? Westerners all together? Europeans together? Or country by country? Should we treat the questions from the viewpoint of a Westerner or a Frenchman, for example? It is not simple, says Védrine.

The USA thinks only of itself and its allies. Europeans are not so sure about their reactions. Should the European approach be created in partnership with the USA? Védrine says that this is not easy as Europeans talk about an Alliance with two pillars, which is something that has not been done before. Is it possible to create a European pillar for NATO, to have more European influence, thinks Védrine. Of course, it is difficult to influence the Americans. For example alongside with the Iraqi case, Tony Blair has tried to push Bush to change his policies in Middle East, but absolutely with no influence (there is no peace process in the Middle East). Even Churchill could not influence Roosevelt.
When we oppose the USA, we do not have influence either, reminds Védrine, and says that France has tried that many times.
Védrine talks about the Lisbon Treaty: what it clarifies, and what not? It is good that the treaty marks an end to the debate on the “constitution”. He says that it was evident that it was never a question of a constitution in the first place inside the EU. It was an international treaty. The talk about a constitution was not useful, it was counter-productive. If there would have been a referendum in Germany, it would have been lost also. Lisbon treaty ends the blockade, but 12 years were lost in this debate.

Questions were asked about Finland and NATO. Védrine underlined his hope that the rest of the EU member states join NATO. However, when discussing the case of Ukraine or Georgia his approach was totally opposite: He does not see any reason for enlarging NATO in Georgia or Ukraine. According to Védrine, NATO is not anymore in the logic of defence there. In the case of Ukraine, Védrine thinks that the enlargement of NATO should be stopped. Georgia is even more absurd, according to him. If Finland wants to join, that can be negotiated with Russia. But Georgia and Ukraine are all about American policies. There should be a debate with the EU partners inside the EU before any future enlargement. For example, objectives in the war in Afghanistan are not clear. Nowadays, the real threat is that NATO becomes a global actor that wants to intervene in all parts of the world, Védrine says.
Another question was posed on the Mediterranean union. According to Védrine, the current EU policies towards the Mediterranean region do not work: The EU’s paternalistic policies are not accepted by the South (when the 10 years of Barcelona process were celebrated, none of the presidents of the southern partners participated). Presentation of the new project was too provoking, however, according to Védrine, and gave the idea that it would be in competition with the EU. A compromise between Merkel and Sarkozy creates now a fusion of the idea of a union for the Mediterranean and the Barcelona process. There will be a common Secretariat – and thus a partnership which did not exist before. It’s about concrete projects, not about a utopian idea of integration. The added value, Védrine underlines, is the new-found legitimacy in the eyes of the countries of the south. They want the Commission’s aid but in a system where they are more listened to. 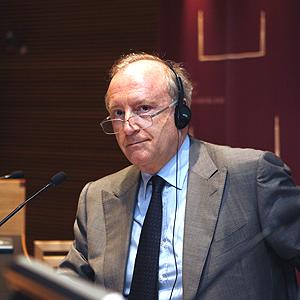 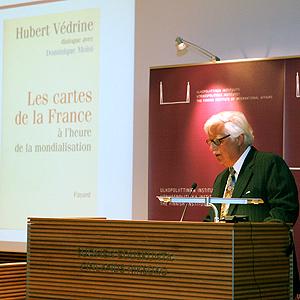 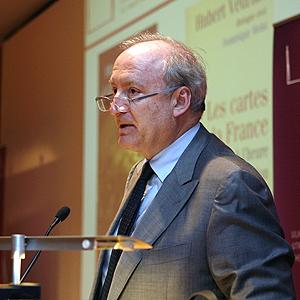