Secretary of Labor of the United States, Elaine L. Chao visited the FIIA on Wednesday, 13th of June, delivering a speech on the topic “Meeting the Challenges of a Worldwide Economy”. Secretary Chao was in Finland by the formal invitation of the Finnish Minister of Labor Tarja Cronberg. During her 4-day visit she also met other Finnish cabinet members including Prime Minister Vanhanen and Finance Minister Katainen. In a meeting with Finnish media on Thursday Secretary Chao attributed her visit partly to a celebration of a new era in Finnish-American relations.

Secretary Chao – daughter to immigrant Taiwanese parents – is the first Asian-American woman to be appointed to a President’s cabinet in US history. Indeed her life story exemplifies the narrative of the American dream and the ideal of the inclusion of immigrants into the American way of life: arriving in the US as an eight-year-old she was later educated in prestigious universities and went on to build a successful career in banking and charities sectors. Her time as CEO of the United Way of America – a charity organization – solidified her good relations with US labor union leadership. Before her appointment as Secretary of Labor in 2001 she served as a distinguished fellow at the Heritage Foundation, a conservative Washington think tank. Under Secretary Chao the US Department of Labor has, among other things, raised the minimum weekly salary for executive, administrative, and professional employees who are exempt from overtime provisions as well as initiated improved workplace safety policies and new financial transparency requirements for labor unions.

Secretary Chao’s speech at the FIIA offered a brief general look into the fundaments of US labor markets and American competitiveness in a globalizing world and also into the work of her Department of Labor. Her key message was that US success in the global economy is strongly supported by labor market policies favoring limited government involvement in market mechanisms and promoting education and workforce mobility.

Mrs Chao opened her presentation by remarking that the USA and Finland share similar challenges and strategies regarding the global economy and hence can learn from each other. The US government believes strongly that the private sector creates jobs: the government’s role is then to secure a beneficial climate for job creation and economic growth, one without overregulation and excessive taxation. Despite some slowdown in early 2007 the US economy is currently healthy with rising wages, job growth and standard of living and low inflation. The US national unemployment rate remains low at 4,5 %.

Secretary Chao attributes three key assets to the American workforce: high productivity, flexibility and mobility. The latter two characteristics describe the startlingly high volume of change in the US labor market: each year approximately one-third of the US workforce leaves their jobs and one-third finds new ones. Another key aspect of American job markets is the substantial role played by small businesses as creators of most new jobs. Despite these advantages the USA – like Finland – faces challenges due to globalization. Demand for lower-skills jobs are declining while there is a growing demand and in certain sectors even a shortage of skilled labor. The United States, too, has largely become a knowledge-based economy. The Department of Labor plays a central role in preparing the workers for this transition.

The Department of Labor is one of the largest departments in the US government. It is responsible for the regulation of health and safety issues, retirement safety and competitiveness of the workforce. A lion’s share of the Department’s budget is spent on different worker training programmes and on support and education actions directed at unemployed workers. With unemployment the emphasis is on helping the unemployed to find new jobs while providing them with temporary income assistance for this transition period (earlier on in the presentation the Secretary made reference to the recent raise in the federal minimum wage initiated by the Democrats). Also seed capital programmes directed at regions undergoing problematic economic transformations are created.

The event was rounded out with an off-the-record question and answer session. 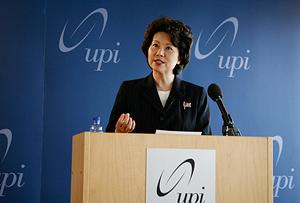 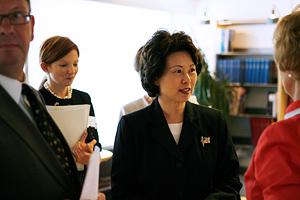