In June 2008 the Norwegian Foreign Ministry asked Thorvald Stoltenberg, previous Norwegian Foreign and Defense Minister, to prepare a report on how Nordic countries could develop their foreign and defense cooperation. The report, published in February 2009, consists of thirteen concrete proposals. They cover topics such as crisis management, air and sea surveillance, arctic cooperation, societal security, as well as other forms of military cooperation, including a suggestion for a Nordic solidarity declaration. The proposed areas of cooperation are open to all Nordic countries, but initially it is enough if two or three states begin cooperation, which would allow for other Nordic states to join in later on.

Mr. Stoltenberg has been Minister of Foreign Affairs as well as Minister of Defence of Norway. He also acted as a UN High Commissioner for Refugees 1989-1991, and UN Ambassador in 1989. He was Chief Negotiator for the UN and Co-Chairman of the International Conference for the Former Yugoslavia 1993-1996 after which he proceeded to be Ambassador to Denmark in 1995-1999 and President of the Norwegian Red Cross 1999-2008.

Ms. Anttila acted as a Member of Parliament from 1991 to 2007. She is today a Doctoral student at the National Defence University, specializing in crisis management under the theme of ”New conflicts, human security and challenges in evolving crisis management ? opportunities for learning”. She was a member of Mr. Stoltenberg’s expert group on Nordic security policy.

Colonel Erroll is Director of the Department of Strategy and Defence Studies at the National Defence University. Previously he has worked as Defence Attache in Stockohlm (2005-2008), Chief of Staff at the Uusimaa Brigade (2001-2005) and Senior Military Adviser at the Ministry of Defence (1997-2001). Erroll has served in Bosnia (KFOR-99) and holds a Master of Political Science from Åbo Akademi.

Mr. Korkeaoja has been a member of the Finnish Parliament since 1991. He was the Minister of Agriculture and Forestry 2003-2007. Since May 2007 he has chaired the Defence Committee. Mr. Korkeaoja was also the Chairman of the Parliamentary Security Policy Monitoring Group in 2007-2008, which gave the parliamentry input to the Government report on the Security and Defence Policy of Finland 2009.

Interpretation from Norwegian into English was be provided.

The day’s seminar, chaired by programme director Hanna Ojanen, was an event for assessment, comment and criticism of an acclaimed report presented in February by the esteemed statesman and ambassador Thorvald Stoltenberg of Norway. The report was created upon a request by the Nordic foreign ministers for an overview on the possibilities for and challenges involved in tighter Nordic cooperation in foreign and security policy. Mr Stoltenberg himself attended the seminar to present this report, a 35-page document roughly one year in the making and consisting of thirteen proposals on Nordic cooperation in the fields of peacebuilding, air surveillance, maritime monitoring and arctic issues, societal security, foreign services and military cooperation. Last, but not least, the report concludes with a proposal for a Nordic declaration of solidarity.

The predominant trend towards globalisation, Mr Stoltenberg said, has spawned unprecedented opportunities for greater international cooperation. On the other hand, globalisation has left countries increasingly exposed, which in turn is an incentive for regional collaboration in smaller and tighter units. For the Nordic countries, one major incentive for greater mutual cooperation is the need to keep up to date with events and developments in the immediate surrounding region. This will be especially important once the Artic ice has melted to the point where traffic across the Barents Sea becomes feasible and active trade routes open up on the northern side of Nordic shores. The implications for Nordic security concerns are significant.

Moreover, in order for Nordic countries to maintain a sufficiently high level of defence technology, ever greater investments in modern apparatus are necessary. Through increased collaboration, military investments could be used more efficiently than in the current situation, where investments overlap and each individual country struggles on its own to maintain the technological readiness that modern defence requires. Mr Stoltenberg underlined the importance of a combined Nordic effort to clearly mark its own sphere of interest when stressing the importance of air surveillance in Icelandic airspace. While he dismissed any fears about invasion or attack, he claimed that visible action is necessary to distinguish key areas of interest to the Nordic countries, or else in twenty years’ time they may be spheres of interest of another state.

At the end of his speech, Mr Stoltenberg lamented the fact that, although the Nordic countries are so close in so many ways, there is still an element of mutual distrust and lack of enthusiasm about the tremendous potential that increased Nordic cooperation would have. He wished to see a change in such unhelpful perceptions.

Former MP and researcher of the National Defence University Ms. Ulla Anttila posed two central questions based on Stoltenberg’s report: Could Nordic Cooperation respond to global challenges? Could it be used to solve difficult peace processes? She characterised conflicts after the Cold War as ones of long continuation and low intensity with non-state actors involved, bearing repercussions on the region at large and having a detrimental impact on human development. She emphasised the presence of signs suggesting that peacebuilding and crisis management was moving towards guaranteeing human security, which stresses individual rights in addition to national integrity. Lessons to have been learnt from previous and current peacekeeping missions are the importance of ensuring lasting peace, motivating involved parties to peace negotiations, agreeing on crisis management concepts and getting locals involved in the peace process. Cooperative Nordic forces could be efficient at meeting these aims, provided they have the right training and collaborate with the right agencies.

Colonel Erik Erroll, Director of the Department of Strategy and Defence Studies at the National Defence University, assessed the report as valuable, feasible, visionary, and a worthy response to what Nordic foreign and defence ministers had anticipated. Nordic military cooperation has a long history, dating back to the 1960s, and sporting a track record of recent successes in peacebuilding in Bosnia and Macedonia. In other words, solid foundations for Nordic cooperation already exist. At the moment, such cooperative missions are conducted only when the circumstances are conducive, whereas they could and should be in a more encompassing, pre-emptive manner. Crucially, the Nordic countries need to articulate how they would respond were a fellow Nordic country to come under attack or undue pressure – the security environment is moving towards a climate where securing one’s national integrity is of the essence. Nevertheless, Nordic military cooperation does pose serious challenges due to pre-existing commitments: Norway, Denmark and Iceland are NATO members, Sweden and Finland are not. On the other hand, three Nordic countries have varying degrees of EU commitments to honour.

Mr Juha Korkeaoja, MP and Chair of the Defence Committee, applauded Stoltenberg’s report and confirmed that Nordic Defence and Security Cooperation has plentiful political support in Finland – at least in general terms. The problems of the report are of a pragmatic nature: defence agreements in Nordic NATO member states are dictated by NATO’s article 5, whereas eg. Finland is committed to the EU’s mutual assistance agreement. This renders air surveillance of Icelandic airspace with Finnish fighter jets a difficult question, and the same is true for the declaration of mutual solidarity. Nonetheless, especially in the field of crisis management, there is plenty of room for cooperation amid the Nordic countries.

Several ambassadors were present in the audience, out of which the ambassador of Austria asked whether the OSCE bore any relevance in Ms. Anttila’s analysis on security cooperation, for it was not mentioned during the presentation. Ms. Anttila responded by saying that crisis management is as a concept different between different countries and different organisations. For the sake of clarity, and to underline the overwhelming challenges involved in peacebuilding and crisis management cooperation, she left the OSCE out. The ambassador of Lithuania, on the other hand, asked whether the Baltic states featured in Stoltenberg’s vision for Nordic security cooperation. Mr Stoltenberg replied with a blunt no, pointing out that cooperation amongst the Nordic countries was difficult enough as it was, and larger integration would not be feasible lest the first step is successfully taken.

Finally, former MP and minister Ulf Sundqvist asked the panel what it would take to get the Nordic leaders to sit down, analyse the current global climate and respond to these rapidly changing conditions by promoting greater cooperation. All agreed that politics is indeed a big ship that turns slowly. 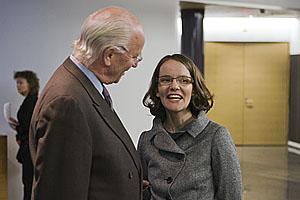 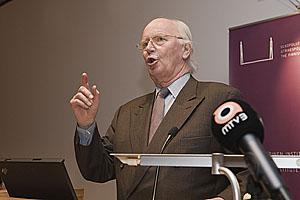 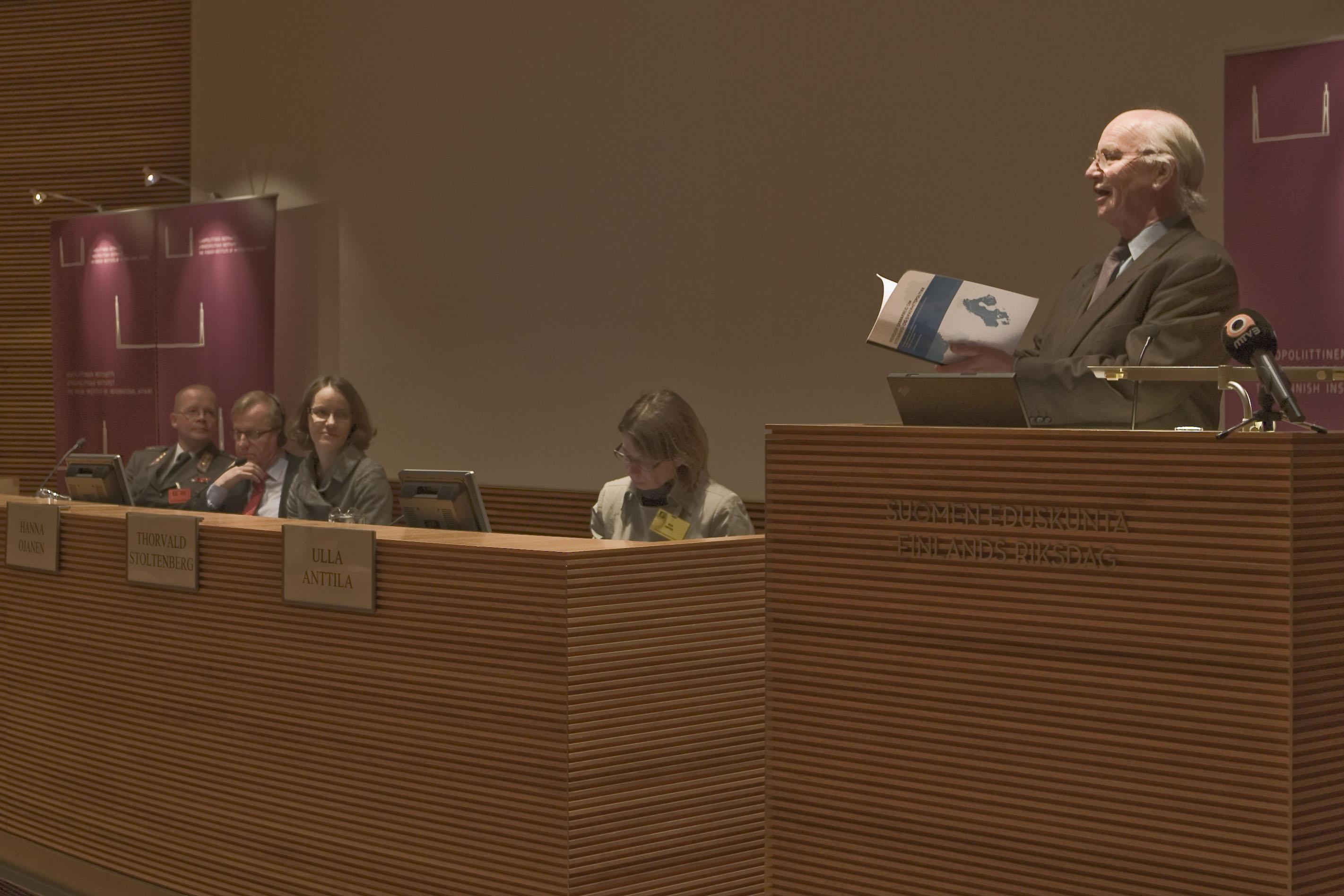 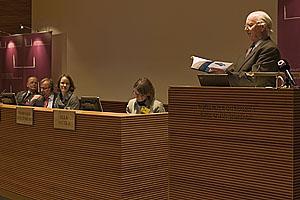 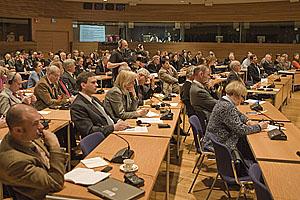 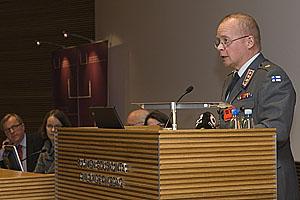 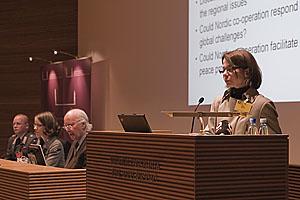 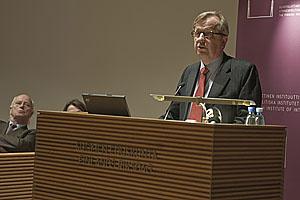