Pandemics affect and are influenced by the global order and governance. Epidemic diseases directly challenge the power of states by eroding prosperity and destabilizing their internal politics and international relationships. The effects of an infectious pathogen to national and global security depend on its lethality and transmissibility, as well as the fear and economic damage caused by it. Emerging infectious diseases present a threat to national and international security. Globalization and ecological change further accelerate the spread of these diseases. These themes will be addressed through two case studies.

“The Pandemic Influenza of 1918: Implications for Modern Health Governance and International Security”
Andrew T. Price-Smith, PhD is the Director of North American Studies, and Associate Professor of Political Science at Colorado College. Andrew has held previous appointments at both the Earth Institute and the School of International and Public Affairs of Columbia University, and at the University of South Florida. He earned his PhD in Political Science from the University of Toronto in 1999, and did his post-doctoral work at Columbia University. Dr. Price-Smith is author of several books, notably Contagion and Chaos: Disease, Ecology and National Security in the Era of Globalization (MIT Press, 2009). In his most recent book he analyzes the effects of the 1918 pandemic influenza on the nations that fought in the First World War, making the controversial argument that the pandemic tilted the balance of power toward the Allies.

“Cholera in Haiti: Disease politics in post-disaster environment”
Mika Aaltola, PhD is Director of the Global Security research program at the Finnish Institute of International Affairs. Mika has previously worked as an Academy Fellow and as a visiting professor at the University of Minnesota (Twin Cities). He earned his PhD from the University of Tampere 1999 and has worked as a visiting scholar at the University of Cambridge and Sciences Po (Paris). Mika Aaltola just published a monograph titled Understanding the Politics of Pandemic Scares: An Introduction to global politosomatics (Routledge, 2011) in which he introduces a new concept of ‘politosomatics’ to describe how individual anxieties concerning pandemics are linked with global circulations of power.

The seminar was opened by Mr. Antto Vihma and the first speech was given by Dr Mika Aaltola. Dr Aaltola’s basic argument is that epidemic diseases are always politicized according to clear historical precedents. He demonstrated the politicization of epidemics by presenting the case of the spread of cholera in Haiti after the earthquake in 2010.

Dr Aaltola has introduced a new concept of politosomatics in this recent book ”Understanding the Politics of Pandemic Scares: An Introduction to Global Politosomatics” (Routledge 2010). The concept describes the way in which individual human bodies are connected on the global level. Thus whatever occurs on the global level directly links with the individual somatic experience. People ‘feel’ the world and changes in it through their somatic fears and anxieties.

Haiti suffered a multitude of concurrent problems after the earthquake, one of which was the rapid spread of cholera in the fall 2010. Diseases like cholera typically cause a containment reaction, mainly because of the aim to stop the spread of the disease. However, in Haiti there would have been a need to build bridges to advance humanitarian efforts.

There had not been a cholera epidemic in Haiti for the last 60 years, and the 2010 epidemic was brought to Haiti by UN peacekeepers. Immediately when this connection was suspected, the spread of cholera, that has caused 6000 fatalities, was politicized.

The security situation in Haiti has been under the control of the UN, and the organization’s role in the country has been controversial and disputed. When the suspicions and rumors concerning the origins of the disease grew, local tensions and riots broke out. The local view was that cholera was brought into the country by foreigners and the aim was to divide the population, which is a typical reaction in the event of a spreading epidemic. In turn, the UN also reacted in a likewise predictable manner: it categorically denied its responsibility. A later investigation concluded that most likely the disease came from a camp of peace keepers in a rural area of Haiti. The spread of cholera caused by UN troops gave the local authorities the possibility to challenge the presence of the international community by politicizing the origins of cholera.

Dr Aaltola underlined the fact that people are not ahistorical or apolitical figures and diseases are inherently political. There are many ways in which diseases can affect politics. Dr Aaltola presented six key consequences that an epidemic can have on politics. First, it can cause instability by for example causing power vacuums and breaks in decision making. Second, it can result in shifts in the balance of power when the disease does not affect all areas in a similar way. Third, diseases can act as signifiers and give proof of the bad shape of governance. Fourth, the outbreak of a lethal infectious disease can be used as an excuse for politically motivated actions such as a military manoeuvre by the state. Fifth, the scare caused by the spread of an infectious disease can lead to major economic losses for instance by decreasing tourism.

According to Susan Sontag’s notion of the Kingdom of the Ill, people are easily administered in medical settings. In the international context, offering assistance and relief is a powerful source of legitimacy. Global governance is perceived as being more legitimate in areas like Haiti, which suffers from a major humanitarian catastrophe. Humanitarian compassion can hide the problems that are linked to the de-individualization and politicization of people.

When a disease spreads, it is very often externalized. A disease can be territorialized, nationalized, ethicized, racialized and sexualized. In Haiti, the fact that the disease originated in rural areas caused ethnic tensions.

The UN has practically ignored the lessons that can be learned from what happened in Haiti. It is important to take into consideration how people interpret the events, such as the spread of an epidemic. The interpretation can have a significant effect on how actual health measures function.

The second speaker was Dr Andrew Price-Smith, whose topic was: “Pandemic Influenza: Lessons learned and Implications for Governance”. Dr Price-Smith began by pointing out how health has been securitized for centuries, and how the question is whether it should still remain securitized.

Pathogens can pose a threat to the economy and the political stability of a country, and it has been shown that the health of the population goes hand in hand with the prosperity and wealth of a nation. The 1918 influenza was a major threat to Europe, and the fact that it occurred during a time of war may have had major consequences on the outcomes of the war. Time is a crucial factor in the spread of diseases, and the fact that certain nations were hit earlier than others could have had notable consequences.

The influenza of 1918 had special characteristics. First of all, it was a widespread pandemic reaching the Far East. Second, it killed many young adults. Contrary to what happens in more common influenza epidemics, those with a stronger immunity system usually died faster.

Until today, it has been thought that the influenza began in 1918. According to Dr Price-Smith, the findings in the Austrian archives show that the pandemic in fact originated in Austria already in 1917. It is hard to demonstrate empirically that it was the same strain of viruses that hit Austria a year earlier than the rest of Europe, but the mortality rates were the highest in Austria and Germany. The spread of the influenza in these countries occurring much earlier than in the Allied states was one factor which affected their performance in the First World War. The lowest mortality rates could be found in the British and French troops. The uneven spread of the influenza could have thus contributed to the Allied victory in the war. Why there was so much difference in the mortality rates remains an open question. It is not known if the reason was possibly a difference in the immunity of the people or the difference in the health systems of the time.

The spread of pathogens tends to create fear and sclerosis in governments. Even if the 2009 pandemic, commonly known as “swine flu” was much less fatal than the 1918 one, it caused a wave of uncertainty and a pronounced reaction in the United States. The estimate of the amount of fatalities produced by the White House was 400000 in America only. This prediction caused anxiety among the population, and resulted in a reaction that was out of proportion in comparison to the actual threat.

There were several problems in the US reaction to the outbreak of the pandemic. The vaccine production was problematic, and it had to be pushed offshore because of legal issues. Also there were distribution problems, which resulted in the rich getting the vaccine prior to vulnerable groups such as pregnant women. However, according to Dr Price-Smith, the overall response of the US to the threat was relatively good.

On the global level, there were several obstacles to an efficient response to the pandemic scare: there was a lack of leadership and everyone expected the US to take charge; the US was waiting for the WTO and the WTO was waiting for more data.

In conclusion, both speakers underlined the fact that pandemics can play a major role affecting national and world politics, and their spreading or not spreading can make a difference in the formation of the global order of tomorrow. This is why preparedness for future pandemics is necessary, both nationally and internationally. 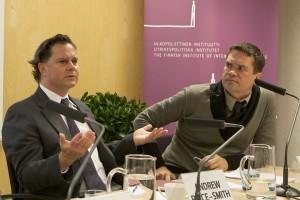