Parties in Russia:
From a pseudo-system towards fragmentation

Launch of the FIIA Briefing Paper ‘Parties in Russia: From a pseudo-system towards fragmentation’ by Dr Sirke Mäkinen

The Briefing Paper Paper ‘Parties in Russia: From a pseudo-system towards fragmentation’ describes the main characteristics of the Russian party system and presents some of its potential developments in the near future.

Dr. Sirke Mäkinen has worked as a researcher at the Finnish Institute of International Affairs since January 2009. Her PhD in Political Science (University of Tampere) focused on the geopolitical argumentation of Russian political parties. In addition to the Russian party system and political parties, her research interests lie in Russian geopolitical thinking and university education.

Dr. Anna-Liisa Heusala works as a researcher in the Aleksanteri Institute. Her research concentrates on Russian administrative reforms, as well as developing cross-border cooperation in internal security and legal spheres.

Dr Arkady Moshes opened the seminar by welcoming everyone to the launching of Dr Sirke Mäkinen’s Briefing Paper, titled “Parties in Russia: From a pseudo-system towards fragmentation”.

Dr Sirke Mäkinen began by introducing two arguments concerning the Russian party system. The first argument is that the current party system in Russia can be classified as a pseudo-party system. The system is controlled, partly created by the executive power and there is no real competition between parties. The second argument is that the party-system is being modified, and Russia will most probably see a moderate liberalization of the current party-system by 2012.

Dr Mäkinen then introduced the Russian party system, where, formally, parties have a significant role. However it is very difficult for political parties to compete for seats in the State Duma. The parties created by the initiative from the presidential administration are not independent political subjects. There is a widespread belief that their agenda and voting behaviour are guided, if not controlled, from above.

Dr Mäkinen argued that one factor affecting the forthcoming moderate liberalization is the economic crisis and political consequences. In Russia there have lately been public demonstrations due to the crisis and fewer people are happy about the direction in which the country is going. Also President Medvedev and his “freedom” rhetoric might be another factor for moderate liberalization. He has suggested minor changes to the laws on political parties and, on elections and has had meetings with political parties. Dr. Mäkinen also argued that the role of the political opposition might have an effect on liberalization. All these factors could call for moderate liberalization if the economic crisis does not turn into a large-scale political crisis and Medvedev stays on as president. However it is a difficult period for making predictions and also alternative scenarios exist: they assume no liberalization at all. Dr Mäkinen argues that it would be extremely advisable for actors outside Russia to maintain or establish relations with Russian political parties, organizations and movements, both loyal and disloyal to the regime.

Dr Anna-Liisa Heusala opened her commentary by regretting that the Russian party system has in general received very little attention in academic studies. She agreed that Russia had some type of party system, but the role of parties is weak and she wanted to remind us that we have to think about the deeper historical reasons for the weakness of the Russian party life. It will be very interesting to see what effect the economic crisis will have on the development of the political system, including the party system. There might happen either radical transformation of political ideology or concentration of governance. Dr Heusala also reminded that the ruling elite will always find a way to get their opinions heard and adapt to further developments.

In the Q&A session there came up different opinions about the moderate liberalization of the party system. It was stated in the audience that in Russia there is not going to happen any liberalization and that Medvedev is totally under Putin’s control.

In the presentation Dr Mäkinen introduced Vladislav Surkov’s new design of the party-system, which includes a dominant party in the centre; the United Russia, the party in the left; Just Russia and the party in the right; Right Cause. Surkov’s plan has however not been completed and a question from the audience was raised that why it is so. Dr Mäkinen answered that this is because in the State Duma there still are two parties, the Communist Party of the Russian federation and the Liberal Democratic Party of Russia. Kremlin does not want to use pressure to get rid of the parties, besides these parties have strong supporters in the society. Also due to the economic crisis it is not possible to execute Surkov’s plan. 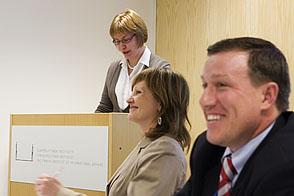 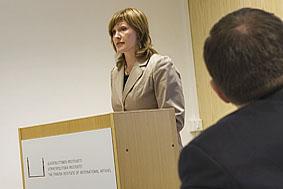 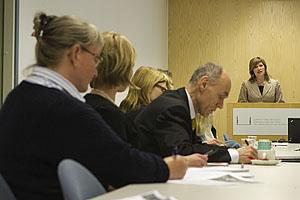