NATO celebrated its 60th anniversary on 4th of April 2009. Is NATO suffering from an age crisis? Should NATO be reformed or re-vitalized? Does the US need NATO anymore? Is NATO for the collective defence or crisis management? The key challenges in NATO´s evolution are among others the New Strategic Concept, Afghanistan, the future of NRF, relations with Russia, NATO enlargement and missile defense. Should NATO retire or is it still going strong?

Chris Cooter has been the Deputy Permanent Representative at the Canadian Joint Delegation to NATO since September 2006. Mr. Cooter has been with the Canadian Department of Foreign Affairs since 1990 and prior to arriving in Brussels he was the Director of Policy Planning. In addition to working on security and European issues, Mr. Cooter has served in India, Kenya and Cambodia.

John R. Hoag is the Director of Defence Plans at the U.S. Mission to NATO. From 1994 to 2003 he served as Deputy Director. Prior to joining the Civil Service, Mr. Hoag was a career officer in the army, serving e.g. in Korea and Vietnam and retiring as a Colonel. He has also acted as an Assistant Professor at West Point.

Prof. Väyrynen is the director of the Finnish Institute of International Affairs (FIIA) and a Programme Director in the Transformation of the World order- Programme at The FIIA. Väyrynen was the president of Academy of Finland from 2004 to 2007 and before that the Director of the Helsinki Collegium of Advanced Studies.  In 1993-2002 he served as Professor of Political Science and Director of Kroc Institute of International Peace Studies at the University of Notre Dame as well as a visiting professor at Princeton and Harvard.

This event has been organised with the kind support of the Embassies of Canada, United Kingdom and the United States of America.

Liisa Jaakonsaari opened the discussion by raising the question of whether at the age of sixty, NATO should retire or initiate a fresh start. The question was approached in the seminar through the main challenges that the organisation is faced with today. These include the new strategic concept, Afghanistan, the NATO rapid reaction forces, the tender relation of NATO with Russia, missile defence shields and the enlargement of the organisation.

Chris Cooter expressed his personal views on which issues the new strategic concept of NATO should deal with when defining NATO’s longer-term role in the new security structure. He considered that the most critical issue to address is NATO’s relationship to other actors. He called for a discussion on the fair distribution of tasks on both sides of the Atlantic as well as with other organisations such as the EU, the OSCE and the UN. Cooter suggested that all four organisations should share the security burden together, based on a functional or geographic division of labour, for example.

Cooter found it important that the drafters of the new strategy address how the lessons learned from previous missions be applied in future operations. Most importantly, the training of indigenous security forces should come as a first priority, as the missions in Afghanistan and Kosovo have shown. Another lesson to be learned is that in the long term the operations’ success depends on the strength of ideas and therefore Cooter suggested that NATO needs to engage in proactive strategic communication and public diplomacy.

The strategic work should also deal with the difficult grey-zone security issues such as energy security, cyber defence and counter-piracy. NATO has traditionally not dealt with such problems but they clearly pose a security risk to its members. NATO also needs to pay attention to the non-traditional security issues, such as policing, border control as well as judiciary and correctional capacities, which can determine military success or failure of operations but are not within NATO’s control. Along with these, economic development and governance and international cooperation in itself are increasingly important to NATO ability to complete missions but all depend heavily on other actors.

Other issues to be addressed by the strategic concept are membership and partnership questions, the relationship with Russia and the reform of NATO as an organisation. Canada believes that the post-Cold War expansion has been good for NATO but if the alliance continues to grow, measures need to be taken to ensure that it acts cohesively. Designed for the Cold War, the NATO headquarters has a difficult time adapting to the new, fast-changing set of issues it is faced with. The civilian and military cultures inside the organisation still find it difficult to work together.

Cooter reminded that although important, the strategy work should not be allowed to take too much energy or time and that decision-making cannot be deferred until the strategic work is complete.

Randy Hoag spoke of the development of the NATO response force (NRF) which was designed to be a rapid reaction force that can be used as a crisis management tool by politicians and a high-tech way for the allies to modernize their forces. NRF is a technologically advanced force with heavy reliance on expensive communication. The six-month rotation system of the NRF enables the national forces to bring back the information and know-how acquired during the training period and in this way allows the allies to profit from selective military modernization. The current economic situation presents challenges as the participation costs of the NRF are almost exclusively borne by the contributing nation. This has a disincentive effect on the allied contributions, known as the “reverse lottery”.

Hoag noted that Finland is one of the strongest contributors of the Partnership for Peace-programme and that Finnish contribution to the NRF would also be welcome. The NRF has a provision for partner participation although the core must come from the alliance. Hoag pointed out that the national forces having participated in the NRF rotation would have the standards in place to contribute to an EU Battle Group without need for retraining. He also noted that the US administration has no institutional objection to ESDP but that in times of strained military resources, the duplication of existing structures is a concern.

Trevor Taylor considered NATO to have shown wise and imaginative capacity to change and to withstand shock. This is largely due to the fact that the major powers as well as the smaller states of NATO have constantly appreciated its existence. NATO is considered as the way that USA and Canada can be connected to European security and this ensures that the organisation has a secure future, independent of the success of its current mission in Afghanistan.

Taylor thinks one of the major challenges of NATO consists of its large membership that shares no commitment to a common security and defence policy. The members tend to agree on the desirability of a certain goal but not necessarily on the means it should be achieved with or the relative priority it should be given. Taylor doesn’t see NATO conducting risky and costly wars of choice but this does not mean that it would not have numerous operations in the future.

According to Taylor, other challenges of NATO include Iran, European defence cooperation and the new strategic concept. Iran is a major challenge to the US influence in the Middle East but it is not sure that the Europeans feel as threatened. Taylor also noted that the strategic concept will have to say something on the nuclear issue and hoped that NATO would engage in the no first-use policy.

Raimo Väyrynen pointed out that although NATO has transformed in a significant manner, there is continuity and collective defence is still the core purpose of the organisation. However, the relevance and credibility of the collective defence provision has decreased in the old member states, while the new members regard it as a real assurance against threats. Väyrynen noted that the provision also works against the further enlargement of NATO to countries such as Ukraine and Georgia, as the key members do not want to become entrapped in conflicts with Russia. Russia will also object to these countries joining NATO as it feels strongly about former Soviet republics not joining NATO and therefore the question of enlargement is very problematic.

Alliance dilemmas are also manifest in the question of the establishment of a missile defence system in Poland and the Czech Republic. In both countries, the public opinion has been against the plans partly because Russia has threatened to direct military strikes against the installations in case of a crisis. Väyrynen pointed out that Russia has been able to profit from the internal disagreements on the issue as well as create further divisions inside of the alliance.

Pertti Salolainen offered some comments to the speakers’ remarks from a Finnish perspective. He noted that the question of the Finnish NATO membership was one of two issues where no unanimity was achieved in the drafting process of the Government’s Security and Defence White Paper. The majority of the drafting group thought there was a good basis for Finnish membership in the future, but the left-wing parties did not agree. Salolainen said that especially the question of participation to the NRF had caused puzzlement in the Committee as it was not clear how and where partners such as Finland could participate. Salolainen also expressed some doubts with regards to security cooperation within the EU and on the Nordic level. On EU security cooperation he noted that the solidarity clause of the Lisbon Treaty does not offer security to individual members by the EU as a whole and that the decision to assist will be up to individual states. The new propositions of Nordic military cooperation were brought up by the concern of rising costs of military equipment but Salolainen pointed out that there are some issues to resolve to determine how the Nordic countries who are members of NATO can cooperate with the non-allied Nordic countries. 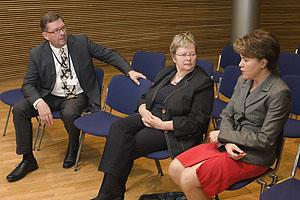 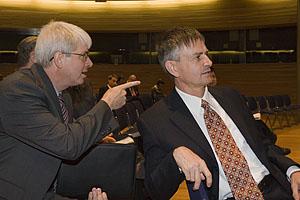 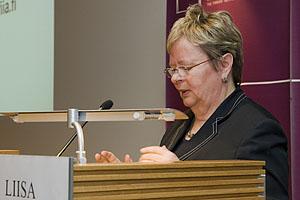 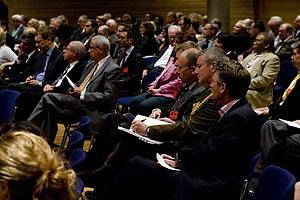 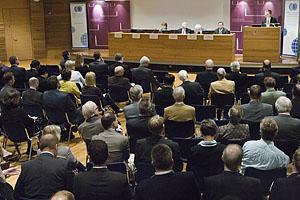 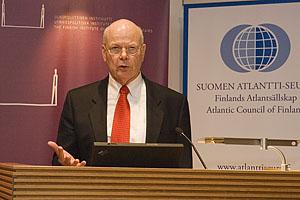 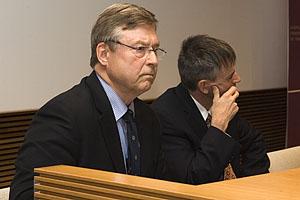