The UN High Commissioner for Refugees, Mr António Guterres will discuss current global challenges and their implications on the work of the UNHCR on the eve of the Refugee Convention’s 60th anniversary. Forced displacement, statelessness and mixed migratory movements remain prominent global issues in terms of their magnitude and complexity. How do states and their citizens adapt to this constantly changing situation? Mr. Guterres will reflect on today’s challenges and future scenarios in the light of current examples, such as the situation in North Africa and the Middle East, protracted refugee situations and new forms of displacement due to climate change and natural disasters.

Before joining UNHCR, Mr. Guterres spent more than 20 years in government and public service. He served as Portuguese prime minister from 1995 to 2002. He has been active in the Socialist International, a worldwide organization of social democratic political parties, serving as its president from 1999 until 2005 Opening remarks and chair: Dr. Mika Aaltola, Programme Director, The Finnish Institute of International Affairs 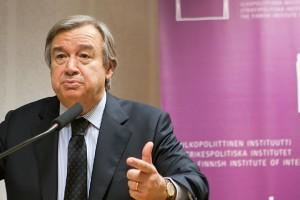