Recent news following the US State Secretary John Kerry’s visit to Moscow and the initiative to hold a
peace conference on Syria have raised some hopes of overcoming the current deadlock and starting some
constructive cooperation between Russia and the West on that issue. Are these hopes justified? What
drives the Russian policy regarding the crisis in Syria? What are Moscow’s goals and what may we expect
further? The Finnish Institute of International Affairs is arranging a seminar to address these issues.

Mr Menkiszak is currently working as a visiting researcher at the EU’s Eastern
Neighbourhood and Russia research programme at FIIA. He has been working as Head of
the Russian Department at the Centre for Eastern Studies (OSW) in Warsaw since 2006.
Previously he worked at the OSW as an analyst in 2000 – 2006, and researcher-lecturer at
his alma mater, the Institute of International relations of the University of Warsaw, in 1995
– 2003. Mr Menkiszak’s fields of expertise include Russia’s domestic, foreign and security
policy, and European and post-Soviet area security.

Dr Behr is a Research Fellow at the Finnish Institute of International Affairs (FIIA) and a Research Associate
at Notre Europe-Jacques Delors Institute in Paris. He is the coordinator of FIIA’s research project on ”The
Middle East in Transition” and holds a PhD from SAIS, Johns Hopkins University.

Chair of the event, Dr Arkady Moshes, Programme Director at the Finnish Institute of International Affairs (FIIA), opened the seminar. In his opening remarks he stated that, on the one hand, the Syrian crisis is seen as a disgrace for the international community. On the other hand, if one looks at Russian diplomacy in the Syrian crisis from a realist point of view, one can argue that Russia’s policy has been successful. It has raised its international influence and has been able to play cat and mouse game with Western leaders; there was not a fraction of that when Russia was on board with the Libyan crisis.

Main speaker of the seminar, Mr Marek Menkiszak, Head of the Russian Department at the Centre for Eastern Studies in Warsaw (OSW), has been working as a Visiting Researcher at FIIA for the last two months. His period here resulted not only in this seminar, but also in the FIIA Briefing Paper on the same topic. In his presentation Menkiszak described Russia’s strategy towards Syria, the reasons behind the strategy, as well as what should be expected next.

Despite the fact that Russia has claimed to act as a neutral force in the Syrian crisis, there has been definitely clear support, both political and military, for President Bashar al-Assad’s regime. Measures of political support include vetoing (already three times) UN resolutions towards Syria, the stance against an embargo, and regular contacts with the al-Assad government. Russia’s main contacts with the Syrian opposition are with leftist minority groups, but contacts with mainstream opposition are rather a PR exercise. Russia also succeeded in making its claims in the final document of the Geneva conference in June 2012. In military terms, Russia’s support is demonstrated by several visits of the Russian navy to Syria. The visits are explained by two main factors: it’s a demonstrative and political signal towards the West, and a means to deliver arms to Syria. The aim of the deliveries is to raise the costs (including human) of possible Western military intervention.

Menkiszak moved on to analyse the reasons behind Russia’s policy. In terms of Syria, Russia’s military and economic interests are much discussed. It is not without justification, but it is not the main reason for Russia’s policy there either. If we look back in history, Syria used to be an element of global Soviet strategy. However, after the end of the Cold War Syria was marginalized in Russia’s policy. This didn’t change until Vladimir Putin became president for the first time, but it was in 2005 that a real break-through came in Russian–Syrian relations when Russia cut off half of the Syrian debt and started systematic weapon deliveries. However, it has never reached a level according to which Syria would be a very significant partner. The Port of Tartus has been seen as a possible place for the Russian navy in the Mediterranean, but there has been no serious attempt to build a base there. Russian companies have got contracts in Syria, but there are no major economic stakes involved.

Rather, the explanation lies within the geopolitical and domestic contexts. Within the geopolitical context, the conservative part of the Russian political elite believes that the Arab spring was not caused by the domestic situation in the countries, but that it was orchestrated by the US. They believe that the Arab Spring is part of a larger project of colour revolutions orchestrated by the US with modern technologies, NGOs and specially trained activists. This view is not common among the Middle East specialists in Russia, but among the decision makers. This explains why Russia did not want to create a precedent for a regime-change based on humanitarian intervention.

Moreover, last year’s protests in Russia influenced the thinking of Russian decision makers regarding the Arab Spring. The initial state of panic within the Russian government was shown, among others, in the statements that the US State Department had orchestrated the Russian protests. Even after the wave of protests came down, concern within the Russian government continued, what was displayed e.g. in the crackdown of some NGOs, arguing that they are means of external influence.

Menkiszak concluded with stating that Russia’s policy towards Syria is not about Syria, but about Russia itself and Russia’s relations with the US. What should be expected next? In the forthcoming Geneva II conference Russia aims at buying time, strengthening al-Assad and weakening the Syrian opposition. According to Menkiszak, only under extreme conditions, as military force failure, Russia would give up al-Assad. However, it would not give up the al-Assad regime.

Dr Timo Behr, Research Fellow at FIIA, made commentary remarks. Behr focused primarily on the two other main international actors of the crisis, the US and the EU. The US, like Russia, has looked at the crisis in strategic terms. Its aim has been weakening Iran and Hezbollah; despite the rhetoric, democracy promotion comes as a secondary goal. The situation with Iran and nation building at home has made the US cautious. It has hoped that somehow the Assad regime will collapse, the moderate opposition will come into power, and Russia and China will make a U-turn. Actually, Behr argued, Russia has been a convenience strongman for the US so that it has not had to act on the crisis. The tone has changed, however. With increasing radicalization, threat of using chemical weapons and spill-over effect of the conflict, the US is starting to shift away from its previous positions. In the short run there will be a meeting of minds between Russia and the US.

The EU is not as strategically minded in its policies towards Syria. In general, the EU has wanted to be tougher on dictators and to build more sustainable stability for the region. However, there are two different groups within the EU: those arguing for stronger managing of the conflict (the UK and France most notably); and those favouring humanitarian aspects and de-escalation, ready to negotiate with all actors. Now the hawks have won the day as the EU lifted the arms embargo. However, it will not lead to any large amount of weapon transfers in the next two months, and there’s also doubt whether the EU can even provide needed material for the opposition. Behr closed his remarks with analysing the prospects of the Geneva II conference: it would be naïve to expect any magic formula to dissolve the crisis – it will be a long process – but there is still possibility for compromise. 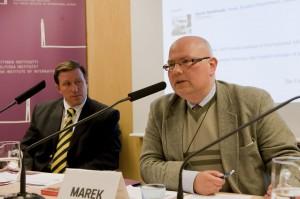 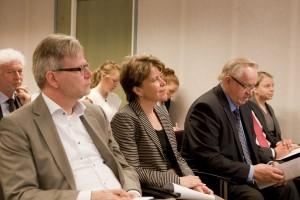 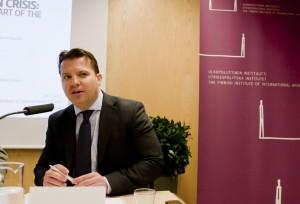 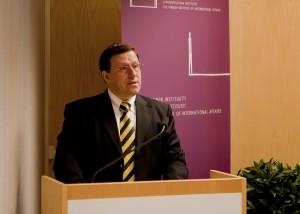