The return of Vladimir Putin as Russia’s president raises a number of questions as to the content and conduct of the country’s foreign policy. There is little doubt that Russia still aspires to remain in the league of world’s most influential players. However, there is no consensus in the West as to what extent it can achieve this goal. One school of thought argues that Russia is still in possession of sufficient resources to at least block the actions of other actorsin key regions, even if it is not necessarily able to push forward its ow nagenda. Another school believes that Russia’s decline is inevitable and is simply a matter of time, that it is holding on but not advancing even in the post-Soviet space, and that it is losing influence in Europe while its own ”pivot” to Asia is more a figure of speech than reality.

The seminar, organised by the Finnish Institute of International Affairs, will offer a view on this issue from the point of view of France, a country which has been one of Russia’s leading partners in the European Union.

Dr Gomart is Vice President for strategic development and Director of the Russia/NIS Centre at Ifri. His academic and professional background has been closely related to post-Soviet space. He has been a Lavoisier Fellow at the Moscow State Institute for International Relations, a Visiting Fellow at the Institute for Security Studies in Paris, and a Marie Curie Fellow at the Department of War Studies at King’s College in London. He holds a PhD in History at Paris I Panthéon-Sorbonne, and an EMBA at HEC.

Dr Moshes is the Programme Director of the EU’s Eastern Neighbourhood and Russia -research programme at the FIIA. He is also an Associate Fellow with the Russia and Eurasia Programme at Chatham House. He received his PhD from the Institute of Europe, Russian Academy of Sciences in Moscow. His main areas of expertise include Russia-EU relations and the internal and foreign policy of Ukraine and Belarus. He has written extensively on those issues, as well as on Russia’s policy toward the CIS and Baltic States.

Dr Arkady Moshes, the Programme Director of the EU’s Eastern Neighbourhood and Russia research programme, opened the seminar by reminiscing last year, when the focus was on Russian domestic politics. However, now that it seems that there will be no dramatic changes in the Russian leadership anytime soon, it is time to look again where Russia is heading with its foreign policy. Dr Moshes introduced the speaker of the day, Dr Thomas Gomart, by saying that it is especially interesting to hear a French view on the Russian foreign policy – ”but not because of [the French actor Gerard] Depardieu”, he added jokingly.

Dr Gomart, Vice President for Strategic Development and Director of the Russia/ NIS Centre at Institut français des relations internationals, discussed Russia’s international position from many angles, but not merely from a French-Russian bilateral one. Dr Gomart told that after writing his PhD about Russian-French relations, he has tried to avoid the bilateral point of view in analysing Russian foreign policy. Bilateral approach would be misleading in analysing Russia now, he stated.

Dr Gomart divided his analysis of Russia’s international positioning in three timelines. The first was short-term: what will happen this year? In 2013, Russia holds the presidency of the G20. However, Dr Gomart expects no innovative global governance from Russia; more important is to support the Eurozone. Secondly, there’s Syria. According to Gomart, Russia was embarrassed from the lessons from Libya, as it realized its own limited military capabilities and that it is not able to do anything similar to what NATO did in Libya. Russia’s position on Syria is a continuation of that on Libya. Also, the Russian view on Arab spring is completely different than that in the West. However, with Iran Russia seems to be much more flexible. Russia has cooperated with the West and supported international sanctions against Iran. In the Middle East, the evolution of Russian-Israeli relations after the forthcoming Israeli elections is important.

The second time period of analysis was medium-term (2014-2018). The first point was about Vladimir Putin’s personal profile. According to Dr Gomart, a typical French analysis of Vladimir Putin is too simplistic: he is considered either similar to de Gaulle, or then he is seen as a spy. Dr Gomart argues that the profile of the Russian president is facing an evolution. Putin’s brutal style helps him to take the lead in bilateral terms, and he is taken seriously when talking about energy and security. Secondly, energy will remain Russia’s main asset. However, Russian oil will be much more expensive to produce, and at the same time margins will decrease – and not without political consequences. There is a strong need for investments and international partnership in the Russian energy sector. Putin is also trying to find a proper balance in the competition between the oil company Rosneft and gas company Gazprom. Thirdly, in the pivot to Asia, Russia can be easily marginalized alongside Europe, as the US and China will dominate.

Third and the last timeline was long term: developments after 2018. Russia’s military spending is increasing while Europe’s is decreasing. Russia is preparing itself for a more brutal international position than Europe. Secondly, there will be two regions sensitive to Russia, the Arctic and the Far East, which are interesting follow. Thirdly, Russia has its special self-vision: Russia sees itself as grounded civilization that enjoys special ties with Western and Islamic worlds. Dr Gomart sees that Russia is navigating between Islamism and Western values; regional and international stability should not be based either on Sharia law or Western-style democracy and neither of these values must be promoted by force.

Dr Gomart concluded his presentation with three points from the French point of view. According to him, a French view is too often seen through provincial glasses. The Russian position would be better analysed without a Euro-centric approach but with combining two faces: Russia as a traditional power and as an emerging market force. Secondly, the French president Francois Hollande is not much interested in Russia now as he has too many issues with the Eurozone, Syria and Mali. Dr Gomart expects that more French foreign policy resources will be allocated to Africa and less to the East. Thirdly, he emphasized that the French leadership should make a consistent and more precise analysis on Russia – ”to redesign the mind-set”.

After the presentation Dr Moshes gave his comments. He argued that foreign policy seems to be less of a priority the Kremlin right now, if to analyse the political discussion in Russia, which is logical. Earlier on, the discourse about ”re-emerging great power Russia” was helping to mobilize the support of the domestic audience, but nowadays the situation is more complicated and there is no automatic correlation. Dr Moshes considered it inconceivable to see Russia as the military adversary of the West. The Russian elite is on a personal level has too many links with and interests in the West, and it does not want to lose access to its assets in the West. There also certain security interests which require cooperation with the West, and that’s why the Afghan transit that is running smoothly even in times of political controversies. But, whereas it is not an enemy for Russia, the West is not a friend either, and anti-Americanism is used by the authorities domestically, which is linked with the official diagnosis of 2011-12 protests as the ”Western conspiracy”. Meanwhile, According to Dr Moshes, Russia wants to look like an ”alternative West”. That’s why granting the citizenship to Gerard Depardieu’s was so important to Russia; this fact is intended to shows its attractiveness and ”soft power” within the West.

When talking about Russia’s ”pivot to Asia”, Dr Moshes argued that we should follow very closely what will happen during the next five years: if it doesn’t happen until then, it won’t happen at all. Now there’s consensus in Russia about emphasizing the importance of Asia rather than Europe, when looking to the future. However, the challenges are strong as Russia has a lot less military power in Asia than in the Soviet times, and a lot less economic power that would be needed to establish itself as an influential actor in the region. Russia’s number one priority remains the post-Soviet space. However, serious offer notwithstanding, the results are still meagre. Russia returned to the policy of massive subsidization of Belarus and declares readiness to provide massive subsidies to Ukraine as well, but it keeps facing enormous difficulties in obtaining economic concession from Minsk, whereas Kiev refuses to join Eurasian Customs Union and the prospects for its transformation into a comprehensive economic union look slim at best.

When it comes to the energy sector, Dr Moshes sees changes and challenges. Gazprom’s production has fallen in 2012 as a result of decreasing demand in Europe, and this a time when is paying only a small fraction of taxes as compared to the oil sector. It cannot be excluded that gas production can become a loss-making business, and this fact will possibly affect the conduct of foreign policy, at least in Europe and the post-Soviet space.

After Dr Moshes’ comments, it was time for questions. Topics such as Russia’s military development, Russia’s emerging soft power ambitions, and the situation in Mali were discussed. 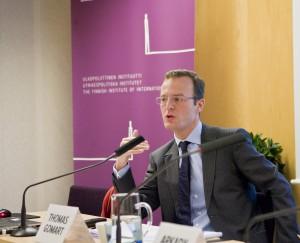 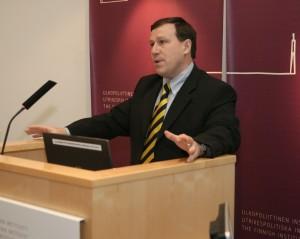