FIIA seminar and briefing paper series
Choices Made: Russia the Rest Will Have to Deal with

Dr. Pavel K. Baev is a Research Professor at the International Peace Research Institute, Oslo (PRIO). His research on the Russian military reform is supported by the Norwegian Defence Ministry. His book Russian Energy Policy and Military Might will be published soon.

Dr. Stefan Forss is a Senior Researcher at the Ministry for Foreign Affairs, Unit for Policy Planning and Research. He is a physicist and has studied nuclear and military policy issues for more than two decades.

On January 25th, the Finnish Institute of International Affair organised the second seminar of its four-seminar series on Russia. This seminar focused on Russia’s security policy. The main speaker of the event was Dr. Pavel Baev from the International Peace Research Institute (PRIO) in Oslo. The commentary speech was given by Dr. Stefan Forss from the Finnish Ministry of Foreign Affairs. The event was chaired by Dr. Arkady Moshes.

Dr Arkady Moshes opened the seminar by giving background to the topic; he stated that the military power has become more important factor in the foreign affairs. As an example he used the military budgets of the CIS states that have grown with two years 65 percent while the GDPs have grown 15 percent. This striking growth is related also with Russia.

Dr. Baev started his speech by looking at the topic question: Should the West be worried. He admitted that it is a very difficult question, as he could not answer ‘no’, but rather he would have to answer ‘no, but..’. Dr. Baev presented a picture that he himself called paradoxical. On the one hand, in 2007 Russian imports from Europe skyrocketed and there are obvious economic links between Russia and Europe. However, on the other hand, Putin’s speech in Munich in February 2007 marked a turning point in Russia’s relations with the West, when President Putin took self-assertive role in claiming the nuclear Russia to be a threat to the unnamed enemies.

Dr. Baev listed Russia’s actions that indicate the shift in Russian policy. Firstly, he mentioned that Russia is no longer participating in the Conventional Forces in Europe (CFE) Treaty. Moreover, Russia has had joint military exercises with China and thirdly, Russia’s relations are getting closer with Iran. Dr. Baev was looking for reasons behind these activities and he concluded that Russia is currently in a very peaceful period in North Caucasus and bases in Georgia are closed down. He also noticed that even if the military power is growing, the total number of soldiers in the national army is reducing. Furthermore, on the side of the military power, the other national projects, such as education, are growing as well.

Dr. Baev stated that President Putin himself is no expert in military-strategic matters, but as President Yeltsin had already before Putin ordered a review on security policy, it was assessed under President Putin, but until 2003 there were very few changes. The Iraq war was a turning point for Russia’s military policy. In 2003, Putin spoke about the importance of the nuclear deterrence forces as the foundation of the national security. Dr. Baev argued that despite the talks on the ballistic missiles and warheads, the talk remain rhetoric since nothing is deployed.

Dr. Baev then moved on to discuss the obvious question that follows this. Why is Russia flexing the non-convincing muscle? Dr. Baev speculated that the Orange Revolution and the shock that it caused for President Putin might one of the reasons. Furthermore, some opponents are deterred with the existence of Russia’s nuclear arsenal. Dr. Baev stated that Russia’s foreign policy can be categorized with different themes. According to him, the main theme in 2006 in Russian foreign policy was energy and its asymmetric energy relations. In 2007, the main theme, according to Dr. Baev, was technology and strategic weapons.

Dr. Baev stated that the West should not worry about Russia when it comes to Belarus or Kaliningrad and Dr. Baev did not anticipate that Russia would be a threat to the US assets in Poland. However, personally Dr Baev was concerned about Georgia. The capabilities, the dangerous rhetoric and the training in the Caucasus are provocateurs that might trigger a conflict in the region. Dr. Baev also recommended the European Union (EU) to act together on the matters concerning Russia.

In the comment speech, Dr. Stefan Forss discussed Russia’s strategic weapons in detail. Dr. Forss stated that Russia’s strategic fleet has been in danger, but there has been a remarkable recovery and according to Dr. Forss Russia will have a very robust nuclear deterrence as long as we can anticipate. Building of nuclear weapons is an area where Russians have excelled.

Dr. Forss showed that the nuclear weapons are now in decline both in Russia and in the United States after the cold war. Neither Russia nor the U.S. accoding to Dr. Forss is building heavy bombers; the Americans are concentrating on the cruise missiles.

In the Q&A session there were number of very interesting points raised up. FIIA’s Raimo Väyrynen started by asking about the role of geopolitics in strategic thinking and the actual state of the Russian nuclear arsenal. Dr. Pavel Baev wanted clarify that the Russian nuclear arsenal is not falling apart and has become more reliable. In Russia, there is reluctance to admit that the number of the warheads is going down. Dr. Baev also agreed that the era of geopolitics is back, but for Russia the geopolitics with Europe remains the same, but he argued that the thinking is changing with regards to Pacific and Caspian Sea regions and Afghanistan. The geopolitics is closely linked with the energy issues.

The issue of Georgia and Azerbaijan were discussed further in the Q&A session. Dr. Baev stated that Russia has very good relations with Azerbaijan, despite the fact that the Baku-Tbilisi pipeline is working. On the contrary, Russia has troubled relations with the Georgia which has a government hostile to Russia.

Russia’s international treaties were discussed and Dr. Baev regretted the absence of any treaties between Russia and Japan. The future of the CFE Treaty according to Dr. Baev seems to be beyond rescues. Russia has had joint military exercises with China that suggests that Russia seeks good relations with China. With the EU, Russia can hopefully renew soon its Partnership and Cooperation Agreement (PCA) and the union state with Belarus is still discussed, but there are no concrete results yet. 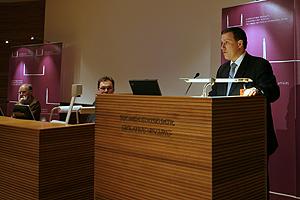 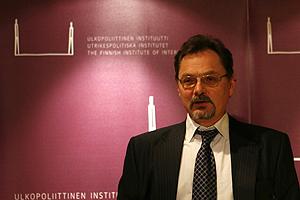 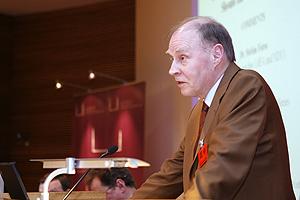 Russia's Security Policy Grows "Muscular": Should the West be Worried?