East Asia has turned into a focal point of global politics in recent years. China’s enhanced influence, ASEAN’s efforts as a regional balancer, India’s as well as Russia’s increased involvement in Asian regional integration, and the newly growing US military presence are furthermore accentuated by Japan’s decline in relative power and the continually weak voice of the EU. Japan and the EU both have in common that they seek to increase their presence in East Asia, while addressing critical domestic concerns. A panel discussion on Japan’s regional security policy addresses the country’s strained relationship with a re-emerging China, the presence of North Korea as a security threat, and the Japanese response to cyber attacks. The afternoon seminar examines the EU’s ambitions for greater involvement in the region, with particular focus on EU-China relations.

This full day event examined the central role that East Asia holds in today’s multi polar world. The morning session dealt with Japan, and during the afternoon, the speakers analysed China related questions.

Previously Japan used to be in a central focus when looking at global developments. The rise of China, however, has placed Japan in the shadow. Nevertheless, Japan is still a major power, and an important economic driver in the region. Furthermore, the role of Japan in security questions is significant and should not be forgotten.

The first session was chaired by Dr Bart Gaens. The first speaker, Dr Seiichiro Takagi, gave his insights on the rise of China and Japan’s response to this. China’s rise has not gone unnoticed on the international field. This progression has had both positive and negative implications. On the positive side, China’s advancements in the economic domain, have helped to raise people out of poverty and have created new markets for other countries’ foreign exports. Due to its economic interests that spread worldwide, China has adopted a peaceful foreign policy line. Nonetheless, its confidence, along with its defence budget, has been growing with its power, and its behaviour has become more aggressive in nature. How will these changes in the world’s biggest country affect the rest of the globe?

China’s growing importance has recently been highlighted as it has recovered very rapidly from the 2008 economic shock. Also, the Obama administration has paid more attention towards the area, and emphasised the importance of China. This has further influenced China’s confidence. However, the country is going through a major internal metamorphosis that affects its political potential on a world scale. Its leaders will be replaced with new ones in a year’s time, in fall 2012, and it is not clear to any experts who will take over. There is a tug of war among the leaders, with an unpredictable result between hard liners and soft liners. Nonetheless, recent experiences have shown them that aggressive behaviour might in fact damage Chinese national interests.

Japan’s take on the changing nature of its grand neighbour has been malleable. Since the future of the developments in China remains an open question, it has seemed like the most rational choice not to put all eggs in one basket. Japan is prepared for different possible scenarios and is acting accordingly. The most important of its strategies has been engaging more with other powers in the area. By strengthening its relationship especially with Australia and New Zealand, it has also been underlining its connection with their close partner, the United States. The rise of China has in the eyes of Japan also lifted the status of the second biggest country and largest democracy in the world, India. The creation of a strong cooperation network in East Asia is Japan’s key aim.

The second presenter, Narushige Michishita, gave a more targeted insight into a very topical security concern in East Asia. He analysed the situation of North Korea from a Japanese point of view with a special focus on its nuclear missile development.

As a close neighbour, Japan naturally has a special interest in following the developments in North Korea, and with the assistance of intelligence information and satellites, it has very accurate information on the military capabilities of the country. It is now clear that North Korea is developing nuclear weapons, and is most likely able to also reach Japan with ballistic missiles. Whether North Koreans are capable of loading their nuclear weapons on ballistic missiles remains unclear, but probable. The missile tests that have been carried out have been pointed exactly towards Tokyo, and thus for Japan, the threat posed by North Korea is tangible. The worst case scenario would be that of Kim Jong-Il deciding that he wants so desperately for his name to remain in history, that he would be prepared to attack Japan, even knowing that this would mean destruction for his country as a consequence.

The response to the threat posed by North Korea contains four different strategies. These include the development of a ballistic missile deployment (BMD) system, creating and strengthening civil defence systems, strengthening the connection with the US in order to maintain and strengthen the extended nuclear deterrence and, most importantly, diplomatic measures.

The situation in North Korea has important implications for Europe as well. North Korea has been exporting its missiles to e.g. the EU’s backyard, Iran. Thus, most likely, the EU will be following very closely what the future developments in North Korea are. In this matter, cooperation with Japan will be essential.

The third speaker of the morning, Dr Motohiro Tsuchiya, presented a less traditional and very topical security threat, cyber attacks. This threat is of recent origin, but has already materialised itself. For instance, a major cyber attack was aimed against South Korea and the US in July 2009. Since these two countries are the closest de facto allies of Japan, this raised awareness of cyber threats in Japan. In 2011, after the tsunami disaster in Japan, the government system was affected by a customised computer virus. This further accentuated the importance of preparation against cyber threats.

In today’s world, the cyber space covers all traditional spaces: outerspace, air, land and sea. Communication between these spaces is vital for the performance of basically all key functions around the globe. If the cyber world is attacked, all of these are influenced. Cyber space is a difficult and elusive space to defend, but simultaneously it is a relatively easy target for attacks. Programs like Google Maps are very easy to use, but can also be very useful to for instance terrorists.

The most important thing in preparing for cyber attacks is to bring together people who are familiar with the cyber world, “geeks”, and decision makers, “suits”. This has not been evident in the past, but needs to be considered as soon as possible. The other communication channels Dr Tsuchiya emphasised were those between the National Information Security Centre (NISC) which pays special attention to cyber security issues and the intelligence agencies. He also pointed out that laws need to be adapted to serve the needs of gathering new types of intelligence that can stop cyber attacks. The secrecy of communication in the Japanese constitution is partly hindering the stop of possible cyber attacks.  Finally, he made a note of the fact that cyber terrorists will not try to stop the internet, something that is often speculated. They themselves are so highly dependent on it, that this would not serve their purposes.

Comments for the morning session were made by Dr Mika Aaltola.

Session 2 in the afternoon was chaired by Dr Jyrki Kallio and opened by Dr Jonathan Holslag. He offered insights on EU-China economic relations. China is of increasing importance to the EU and these two have been increasingly engaged with each other economically. The strategic partnership is comprehensive and economically beneficial. However, at the same time, the two parties have major differences in their views on the nature of the relationship and on the rules guiding it.

The EU has expected a growing normative convergence that would bring China towards the Western system of global governance and the acceptance of human right norms as the Europeans see them. China in turn has an interests first approach. It wants to ensure its economic benefits but also secure its relationship with the US. It also prefers to see a rupture between the US and the EU. Another divisive factor is that the EU wants to increasingly include China in the global free market system, but China prefers its current import substitution system.

In this field everything has not gone according to plan in the EU. The economic partnership with China has not been as balanced as it was initially expected to become. The prospects on the division of labour have not materialised and the balance of payments has not been beneficial for the EU. The fields in which Europe has a comparative advantage compared to China are shrinking and China is taking over leadership in many traditionally European industrial sectors. The EU’s decision makers are thus struggling to predict China’s future moves and deciding in which sectors to downscale and in which to keep producing. China is gaining jobs in manufacturing, while the EU is losing them. China is overproducing goods and the EU over consuming them. China is mostly investing in the banking sector in the EU, but their investments have been 10 times smaller than the investments of the EU to China. This is not likely to change in the near future.

As the above examples show, it can be said that China and the EU are actually mirror images of each other in major economic policies. China sticks to its weak yuan, over half of its public spending goes towards infrastructure, and most of its industries are state owned. The EU in turn is suffering from its strong currency, its public spending goes towards welfare policies, and thus growth concentrates in non-productive sectors.

There are different scenarios for the future of the China-EU economic relationship varying from trade wars to a gradual opening of key Chinese sectors leading to a more balanced situation. Dr Holslag’s view on the current situation and the following developments was not a very positive one. He stated that Brussels is becoming more and more defensive in its economic strategy towards China. In turn, Chinese officials are losing their faith in the EU as a political player and have given up on the External Action Service as a credible partner. The social standards of the EU are considered unrealistic and irresponsible, and Europe is no longer seen as a very promising soil for new investments. Nonetheless, the EU still remains China’s most important export market. This means that the Chinese will not give up on cooperation, but most likely the nature of the collaboration will be under major turmoil.

The comments to Dr Holslag’s presentation were given by Ms Elina Kalkku and Dr Mikael Mattlin. Ms Kalkku underlined the importance of the strategic partnership between China and the EU and pointed out the major economic interdependency between the two. Economic questions and security questions are growingly intertwined from the EU’s point of view, but in Asia the EU’s role is mostly economic, it has no relevance in the security policy dilemmas of China. Finally, she emphasised the need for the EU to act in a more coherent way vis-à-vis China. 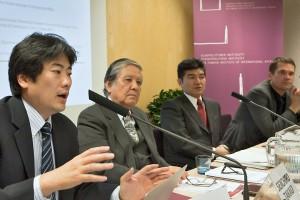 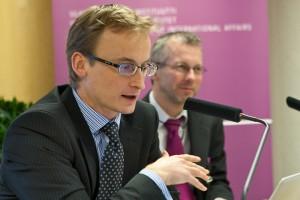 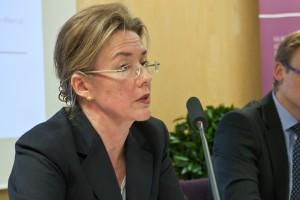 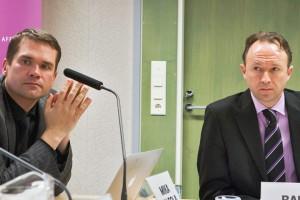 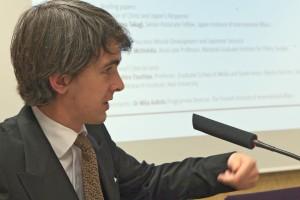