The warfare in Ukraine has raised new security challenges for Europe, to which NATO has been responding. The most immediate and important response has been the NATO Adaptation and Assurance Measures. The seminar will analyse these measures, along with the current situation in Ukraine, including the U.S. training mission there, the outcomes of the 2014 NATO Wales Summit, developments such as cyber warfare, and other new security threats.

Speaker: Frederick Hodges, Commanding General, United States Army Europe
Lieutenant General Frederick ”Ben” Hodges is Commanding General, United States Army Europe. A native of Florida, General Hodges is a graduate of the U.S. Military Academy at West Point. In addition to a variety of staff positions in the United States, he has served in Germany, Iraq, Korea, Afghanistan, and Turkey. General Hodges commanded infantry units at the Company, Battalion, and Brigade levels at the 101st Airborne Division. Before assuming his current position, he was Commander, NATO Allied Land Command.

Chair: Teija Tiilikainen, Director, the Finnish Institute of International Affairs
Summary of the seminar:
Director of the Finnish Institute of International Affairs Teija Tiilikainen opened the seminar. She emphasised that the security environment of Europe has changed dramatically and the spirit of trust has lost ground. There is a lack of important actors, which increases the likelihood of escalation of crises.
The keynote speech was delivered by Commanding General, United States Army Europe, Frederick (Ben) Hodges, who had been invited to Finland to support and strengthen the relationship between the U.S. Army Europe and the Finnish land forces. His speech underlined the actions the U.S. Army Europe is taking to support NATO and what the alliance is doing to adapt to the changing security environment and to assure its members. He noted that relations between Europe and the U.S. remain very strong; European partners, along with Canada and Australia, are the most reliable and important as the U.S. attempts to gather coalitions to tackle global problems. To understand the history and the security environment in Europe, the U.S. has hired Europeans to work in U.S. Army Europe headquarters. Gen. Hodges also assured the audience that the U.S. will stay committed to Europe and its nations. He noted that even though the 28 members of NATO have different interests and concerns, they all agreed that the occupation of Crimea by Russia was illegal and that it is unacceptable to establish spheres of influence and violate the borders of sovereign countries. Gen. Hodges remarked that Russian troops are indisputably present in Donbass. He also noted that Russia is building field hospitals and transporting arms and sophisticated equipment there, actions which in previous cases have preceded attacks. He voiced support for full implementation of the Minsk II Agreement, but since most of the conflict area in Donetsk and Luhansk is not being monitored because Russia is not allowing the OSCE full access to work, implementation remains difficult. Russia is attempting to control a foreign area in Europe. Although Moscow is trying to create uncertainty and to undermine NATO’s collective security guarantee, the U.S. remains committed to defending its allies. When it comes to the assurance and adaptation measures of NATO, Gen. Hodges highlighted that within two years, NATO will deliver everything it promised in September 2014 at the Wales Summit. Assurance measures involve a series of multinational exercises around Europe, and adaptation measures like the Very High Readiness Joint Task Force, the change of mission of NATO’s Multinational Corps North East, and the advancing of freedom of movement in Europe.
Esa Pulkkinen, Director-General of the Defence Policy Department at the Ministry of Defence of Finland, provided the Finnish Government view on the issue. He noted that the recent events will have serious and long-term security implications for all of Europe. We have witnessed a return to hard security, with increased military activity, a change in political rhetoric, and an increase of information propaganda. Pulkkinen said that Finland welcomes the concrete steps the U.S. and NATO have taken to increase security in Europe. Finland will continue to cooperate with NATO through enhanced cooperation, to play an active role in the EU, and to cooperate with Nordic countries within NORDEFCO. He noted that we must be able to assess the stakes quickly, and to have synchronised approaches on the institutional level, as in cooperation between the EU and NATO. In addition, Pulkkinen expressed hope that the new government of Finland will increase defence spending as announced. He highlighted that the F18 Hornet programme between Finland and the U.S. is important for us, and noted that Finland looks forward to finding new avenues of cooperation with the U.S.
Wide-ranging questions from the floor included ones relating to hybrid warfare, Finland’s allegedly being a ”security consumer” instead of being a ”security producer”, the future of credible defence of Finland, the institutional instability of Russia, the joint naval exercise of China and Russia in the Mediterranean, the likelihood of nuclear capabilities being used in an European war, and finally, the possible implications of the Ukraine crisis for the Arctic Council.
As a counter-measure to hybrid warfare, Gen. Hodges emphasised that the West must continue to trust its legislative bodies and to widely circulate information on Russia’s illegal actions. He also noted that NATO will enlarge further only if countries apply for membership, and that land power is a demonstration of a special commitment and assurance. Gen. Hodges voiced his belief that Finland has not had a destabilising effect on European security, and he underscored the fact that the choice whether or not to seek NATO membership is solely Finland’s sovereign decision. Pulkkinen remarked that in spite of the changed security landscape, Finland has taken care of its defence. He added, however, that maintaining a credible defence is not easy, and that he trusts Finnish politicians to take national defence seriously. In addition, he thinks that our society is willing to invest in expensive programmes to maintain security.
Gen. Hodges underlined that as long as NATO maintain its unity, Russia will not have the capacity to attack NATO members. He was not concerned about Russia’s and China’s naval exercise in the Mediterranean, but he did worry that the size and the capabilities of NATO navies are not as great they formerly were. He noted that Russia is the only country that talks about nuclear weapons in a threatening way and that he would like to see Russia rejoin the international community. When it comes to the Ukraine crisis, Pulkkinen was worried that the situation could escalate to the level where there would be the possibility of using nuclear weapons.
Regarding the Arctic Council, Gen. Hodges saw it as exclusively civilian, and would not like to see the Arctic destabilised or militarised. Pulkkinen added that Finland’s capabilities can be stabilising factors in the Arctic, but he was concerned with the way Russia has started to expand its borders by stretching laws and starting to claim underwater riches. 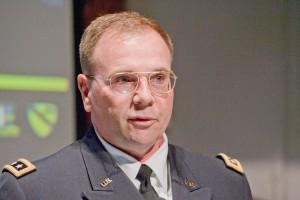 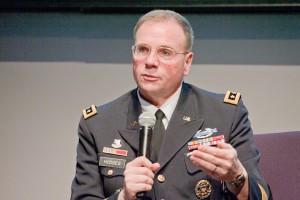 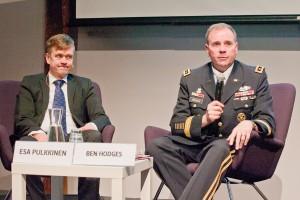 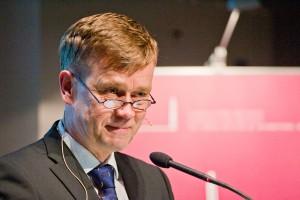 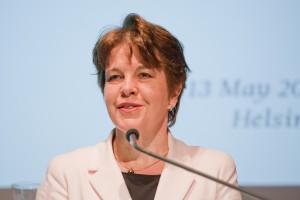