The Council of Europe is the largest political cooperation organisation in Europe. Its various human rights monitoring mechanisms and parliamentary assembly have for the past 60 years helped to create a common democratic and legal area throughout the whole of the continent, ensuring respect for its fundamental values. Recently, the Secretary General Thorbjorn Jagland has set up a Group of Eminent Persons chaired by Joschka Fischer to formulate a vision for the future of the organisation. What are the capacities, relevance and the added value of the Council of Europe, and in particular its parliamentary dimension, for the protection of democracy, rule of law and human rights in today’s and tomorrow’s Europe?

Welcoming Remarks:
Sinikka Hurskainen, Member of Parliament, Chairperson of the Finnish Delegation to the Council of Europe

Keynote Speech:
Mevlüt Çavuşoğlu, President of the Parliamentary Assembly, The Council of Europe

Chair: Mirja Ryynänen, Member of the Board, Finnish Institute of International Affairs; former MP and member of the Finnish PACE delegation and former Member of the European Parliament

Sinikka Hurskainen, Member of Parliament and Chairperson of the Finnish Delegation to the CoE, opened the seminar with her welcoming remarks. She noted that Finland has been an active member of the CoE for more than 20 years and is convinced that Europe’s oldest political organisation still plays a key role as a human rights defender and developer of new human rights tools and mechanisms. She also noted that the CoE has always shown a capacity to adapt to changes and believes it will also be able to answer to the new challenges of the European cooperation structures.

The President of the Parliamentary Assembly of the Council of Europe Mevlüt Çavuşoğlu began his speech by stating that the CoE is the only pan-European political forum for dialogue. He noted that the CoE played a major role in promoting democratic institutions and human rights in Central and Eastern Europe after 1989. The CoE has, through its standard-setting function, contributed substantially to the creation of a corpus of common values and principles shared by virtually all European countries. One of the most important institutional tools of this standard-setting is the Venice Commission (the European Commission of Democracy through Law), which has provided legal advice and assistance also outside of the European continent to help countries rebuild and reshape their democratic institutions and adopt legislation according to CoE standards.

The Parliamentary Assembly contributes to the goals of the CoE by adopting resolutions and recommendations as well as with its specific instruments and mechanisms, the most efficient of which according to Mr Çavuşoğlu is the so-called monitoring procedure. The Monitoring Committee of the Assembly is responsible for verifying the fulfilment of the obligations and commitments accepted by member states upon their accession to the CoE. The Committee is currently assisting ten countries under the monitoring procedure, and four countries are engaged in post-monitoring dialogue. Mr Çavuşoğlu also said that the Parliamentary Assembly has been very active in developing parliamentary diplomacy, and that he has during his Presidency sought to focus on those member states that present delicate political and institutional situations to facilitate dialogue and contribute to finding solutions. Mr Çavuşoğlu went on to describe some of the efforts of the Parliamentary Assembly in the member states that are under the monitoring procedure. He also made a special note on Belarus, the only country in Europe whose parliament has no official status with the Assembly, saying that discussions to normalise the relations with the country cannot start until the non-negotiable condition on abolishing the death penalty is respected.

According to Mr Çavuşoğlu, the Parliamentary Assembly has to also react to challenges common to all societies across borders. He noted that the CoE was among the first international institutions to condemn the discriminatory treatment of Roma in Europe. He also mentioned that the case of the Roma is only one example of the recent general rise in extremist, racist and xenophobic rhetoric in many countries, and this requires a comprehensive response. Extremist populist parties across Europe are capitalising on security concerns by equating immigration with crime. Another worrying trend is that in an attempt to regain the support of the electorate, also mainstream parties are picking up some of the xenophobic language of extremist parties. Mr Çavuşoğlu underlined that it is the politicians’ responsibility to eliminate negative stereotyping or the stigmatising of any minority or migrant group from political discourse. He congratulated Finland on the country’s efforts to fight discrimination through the ratification of Protocol no. 12 to the European Convention on Human Rights (ECHR) and the introduction of legal and institutional measures against racial discrimination. Mr Çavuşoğlu thinks that Finland is the country where the CoE recommendations on achieving gender equality also come to the closest in reality.

One of the major challenges facing the CoE is the accession of the European Union to the ECHR, provided by the Lisbon Treaty. The Parliamentary Assembly believes that the EU should also accede to other key CoE conventions. As the powers of the EU continue to extend, it is essential that direct access to the Strasbourg court be provided for citizens who consider their rights violated by the EU. Mr Çavuşoğlu underlined that the effectiveness with which the CoE can face its current challenges depends ultimately on the willingness of the member states.

Elina Pirjatanniemi, Director of the Institute for Human Rights at Åbo Akademi University started her presentation by reminding that it is important to remember that the CoE is more than just one convention and that the organisation has created a unique pan-European legal area. She noted that the role of politicians and politics, and not only that of lawyers, is essential in human rights issues. For example, the Parliamentary Assembly’s efforts to develop parliamentary diplomacy and promote democratic values are also essential in creating a human rights -friendly landscape in Europe.

Ms Pirjatanniemi went on to discuss the relationship between law and politics, which even if often viewed as opponents, engage also in interaction when it comes to human rights. While law presents limits to politics, the role of politics is crucial in the delicate fashioning of the mechanisms that guarantee enforceable rights. Legal norms do not develop in a vacuum, but are often based in a dialogue within society, and politicians can play a crucial role in starting a dialogue on certain issues. Politicians are also important in identifying the momentum to push issues forward; they have both the capability and possibility of promoting fundamental and human rights as they can contribute to tolerance in their discussions with the electorate, if they choose to do so. While courts play a significant role, they react only after a violation has already occurred and it is the political system that can ensure that human rights violations do not occur. To Pirjatanniemi it is natural that there is certain tension between fundamental and human rights on the one hand, and necessities of politics on the other. She noted that the short-term nature of politicians’ contracts can influence the quality of the human rights discourse as it is sometimes more comfortable for politicians to keep quiet about delicate human rights issues or even promote solutions that are problematic from a human rights perspective. As politicians play such a crucial role in human rights, Ms Pirjatanniemi expressed her hope that they have the courage to protect the fundamental values even during electoral campaigning and that they choose to act as human rights defenders.

Ms Pirjatanniemi congratulated the strong language and stance of the CoE resolution on Roma rights and noted that the organisation has given its member states good guidelines on how to improve the situation and she hopes they will be taken seriously. The role of politicians is primary in counteracting xenophobic language and acts. While she agreed that Finland has taken many measures against racial and gender discriminations, she underlined that there is still much to do with regards to underlying attitudes.

During the discussion, several issues related to the work of the CoE and human rights in general were brought up from the audience. Mr Çavuşoğlu responded to a question on the treatment of Muslim immigrant minorities in Western Europe by saying that as migratory forces will continue to grow, integration policies must really be worked on. He said that the rise of islamophobia is a source of concern and noted that the media’s portrayal of Muslims is one-sided and often shows them as bread- and job-takers. Ms Pirjatanniemi emphasised the importance of primary education in creating tolerance and a human rights –friendly environment.

The chairperson Mirja Ryynänen concluded the seminar by saying that the history of the CoE has been a success story and that it is in the hands of the member states to ensure that also the future is a success story in meeting its current challenges. The politicians have the responsibility to be the guardians of our fundamental values, especially when the trying times of financial constraints seem to be leading to xenophobia and discrimination. The mechanisms to protect human rights are in place and so all depends on political will. 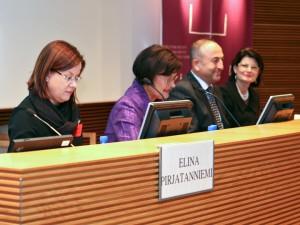