Framsida / Evenemang / The EU and Morocco: How much scope for deeper...
Dela med andra
Dela med andra
Morocco applied for fully fledged EC membership in 1987. Since this date the relationship between the close geographical neighbours gained momentum and gradually took shape to reach an advanced status in terms of political dialogue and
co-operation density. A comprehensive Association Agreement with the EU, Morocco’s high level involvement in the Union for the Mediterranean and the 2005 Action Plan clearly translate this mutual need for co-operation and understanding.

As Morocco calmly navigated through the troubled waters of the Arab Spring, does its domestic stability enhance the chances for even deeper engagement?

Mbarka Bouaida was a Member of the Political Bureau of the National Rally of Independents (RNI), the first opposition group in the Moroccan Parliament since the 2011 legislative elections. She was also a locally elected Councillor in Casablanca. Bouaida is former Chair of the Committee of Foreign Affairs and the National Defence and Religious Affairs in the Moroccan House of Representatives, and was in charge of relationships between Moroccan and European parliaments. At the international level, Bouaida is Vice-President of the International Parliamentarian Forum for Democracy and a Member of the North-South Centre of the Council of Europe. She also dedicates time to local associations in her native region in the southern Sahara, acting as General Secretary of the Moustaqbal Association for Education.

The seminar was opened by its chair, Acting Programme Director Dr Kristi Raik, who said that the seminar concentrates on the EU-Morocco relationship and considers where this relationship is heading and what is its final destination. The panel’s purpose was also to highlight the Moroccan view of the relationship. Morocco has, according to Dr Raik, been deepening its relationship with the EU during the past decade.

Ms Bouaida noted that the partnership is based on the EU-Morocco Association Agreement, and that Morocco is the only country among the European Neighbourhood Countries that has been recognised an advanced status. In Morocco the will to enhance the cooperation with EU persists in addition to a strong orientation to the African continent. Ms Bouaida explained that the EU-Morocco relationship focuses on various domains: political and security, economic as well as human and social dimensions.

According to Ms Bouaida the role of the EU in the countries in Middle East and North Africa is important, especially after the Arab Spring. The Arab Spring has still unknown effects to the countries and the countries may not be able to handle the effects alone. Lastly Ms Bouaida stressed the importance of a common vision and coordinated action plans between the EU and Morocco.

Senior Research Fellow Mr Wolfgang Mühlberger commented the presentation of Ms Bouaida, first underlining that the EU–Morocco relationship is a profound and important one that has been developing steadily since the 1960s. According to Mr Mühlberger the recent visit of Johannes Hahn (European Commissioner for Enlargement and European Neighbourhood Policy) to Morocco has had a positive symbolic effect on the quality of the EU-Morocco relationship.

Mr Mühlberger provided reflections on the economic aspects in the EU-Morocco relationship. For example, he noted that agriculture plays a significant role in the Moroccan GDP, and that the EU and Morocco continue the negotiations concerning a DCFTA (deep and comprehensive trade agreement). From Morocco’s perspective the trade in agricultural goods is an essential feature. In addition, the EU’s foreign direct investments in Morocco play an important role.

Mr Mühlberger also reflected on Morocco’s domestic politics. He stated that the basic circumstances of Morocco are different compared to other countries in the region. In general, Islamist parties had a strong show in the country’s last parliamentary elections. How this victory effects domestic politics in the long run is, according to Mr Mühlberger, still to be seen.  Mr Mühlberger also mentioned a constitutional reform which was voted for in 2011. In general, reforms need an implementation phase before conclusions can be drawn. Certain reform achievements such as agreements on human rights risk being rolled back because of the fight against terrorism.

Question 1: How do you see Morocco’s economic cooperation with the EU in the future?

Answer:  From the economic perspective it has to be remembered that the EU is the first partner for Morocco, also in finance and trade. Agriculture is indeed important but various things are changing. Developments in the economy have been taking place since the 1980s. The strengthening and diversification of the economy has resulted in new development plans for different sectors.  Also a ‘green plan’ has been established to restructure and modernise agriculture. Morocco also started to plan and is setting up new industries, as seen for instance by an increase in the export of cars. Morocco is becoming a platform, not only for the EU, but also for Africa. This means that it is tapping into a huge market.

Foreign direct investments have an important role in Morocco and the EU is the biggest investor in the country. Morocco has a liberalised financial system and its economic prospects are good: moderate GDP growth was the case in the 2000s (except in 2012 due to the Arab Spring). Morocco is investing in professional development and the purpose is to train the population to meet the international needs.

There are negotiations for a Deep and Comprehensive Free Trade Area (DCFTA) going on between the EU and Morocco. At least from the Moroccan perspective these negotiations are not easy and will take time. At the moment Morocco is conducting its own studies on issues and discussing with different industrial sectors.

Question 2: What are the advantages of the EU’s ”more-for-more” approach for Morocco?

Answer: The more-for-more approach and its conditionality are creating a positive pressure. However the approach has only a short term vision and does not take into account that each country has different political conditions and priorities. For example, for Morocco the priority is the implementation of constitutional reforms. Also, the more-for-more approach should be less technocratic but more political.

The Union for Mediterranean has a possibility for success but at the moment it needs to be reviewed. The 5+5 Dialogue, an informal sub-regional forum consisting of five European Union countries and five Maghreb countries, is a good institution for cooperation as it operates within a sub-regional context. Institutions have a role in creating a political and economic space. At the same time, it is important that institutions create a relationship between countries and do not only concentrate on common projects. 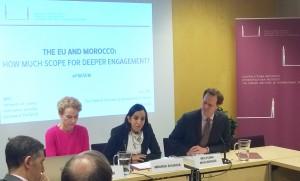