Civilian crisis management has quickly taken a central role in the EU’s Common Security and Defence Policy (CSDP). It is an important tool in strengthening the local authorities in post-conflict societies, as they build up Rule of Law or reform their security sector. In the past few years the geographical focus of the new civilian operations has been directed more and more to Africa. In addition to the earlier focus area of the Horn of Africa, the conflicts and their repercussions in the Sahel region and North Africa have called for more international attention. What are the future prospects of civilian crisis management? What kind of new problems arise from this new focus on Africa? Can the EU enhance its role in Africa through CSDP operations as part of its comprehensive approach?

Speaker:
Mr Hansjörg Haber is Civilian Operations Commander and Director of the Civilian Planning and Conduct Capability (CPCC) at the European External Action Service. His previous professional experience includes serving as Head of the European Union Monitoring Mission (EUMM) in Georgia, as the German Ambassador in various countries, and as Head of the UN Division at the Federal Foreign Office in Berlin. He studied economics at the University of Munich.

Dr Teija Tiilikainen, Director of the Finnish Institute of International Affairs, opened the event by welcoming Ambassador Hansjörg Haber, Civilian Operations Commander and Director of the Civilian Planning Capability at the European External Action service, to the seminar. Dr Tiilikainen pointed out that the seminar is centred on the topic of the ‘EU as a civilian superpower’ which supposedly accounts for all kinds of crisis management capabilities to engage with in conflict resolution attempts.

Ambassador Haber started his presentation by thanking Finland for its contribution to civilian European Union (EU) missions, while hoping that his visit in the Finnish Institute of International Affairs will count for a small contribution to reflexions on crisis management in Finland. Ambassador Haber regards the European External Action Service (EEAS) as an ongoing project that aims at developing and carrying out capacities that export democratic values defined within the framework of the Common Foreign and Security Policy (CFSP) of the EU. These include the export of a coherent democratic security sector, the guidance of countries on their way to the rule of law as well as the erection of a connected police infrastructure.

In the following, Ambassador Haber numbered the development and the various strengths of the Civilian Planning and Conduct Capability (CPCC) of the EEAS, while not neglecting the current and future problems it is facing. While the EEAS and the CPCC only came into being subsequently to the ratification of the Lisbon treaty in 2009, EU-based civilian crisis management operations date back to the European Union Police Mission in Bosnia in 2003, under the then prevalent European Security and Defence Policy (ESDP), thus building up experience and capabilities ever since. While the EEAS and the CPCC still are young and small organisations compared to other international organisations such as the United Nations (UN), the EEAS has long-trained and experienced police forces at its disposal. An example of the capability is the training of top-level police forces in Afghanistan which is conducted by the EEAS, while the regular patrol units are being trained by NATO, as Ambassador Haber pointed out.

In this context, Ambassador Haber raised the question about whether joint civilian and military crisis management operations in a given conflict situation can lead to a bundling of different capabilities. What followed was the example of a coherent desktop exercise, which included a crisis management concept reaching far down into the conduct phase in the exemplary case study of piracy in Somalia. In the evaluation phase of this exercise, the difficulties of coordination of civilian and military crisis management capacities became apparent. As to this day, the organisational difficulties outbalance the possible positive gains of such an approach.

Next, Ambassador Haber pointed out the need to develop a crisis management planning methodology which is more adequate to civilian missions, as the EEAS necessarily had to adopt NATO guidelines during the course of its institutionalisation. Ambassador Haber stated that this is where the academia can play a crucial role in the further development of the EEAS. A specialised civilian approach could alleviate organisational problems in the field, which Ambassador Haber experienced first-hand, such as in Georgia, where a more rapid deployment of CPCC forces would have led to a more beneficial outcome out of the conflict transformation phase.

Connected to these problems, stands the then-existing lack of infrastructure, which has been tackled in the past years. Not only has a warehouse with the most important equipment for work in the field been established, but also the planning of a shared service centre has progressed. This centre is crucial for a more standardized and thus more efficient employment and allocation staff, as to the high fluctuation of the human resources of the CPCC.

In reference to his opening words, Ambassador Haber again pointed out Finland’s much valued contribution to crisis management operations. The amount of allocated human resources from Finland stands at the top of all EU member countries in regard to the rate per capita of people participating in EU-led civilian crisis management operations, only closely followed by Sweden. Ambassador Haber distinctively stressed his appreciation of Mr Antti Hartikainen, who is to become the Head of Mission at the EU Border Assistance Mission to Libya.

Ambassador Haber concluded his presentation by recalling the title of the seminar, which included the notion of a new focus of civilian operations in Africa. While the EU-led Congo mission in 2005 was the first one to take place in Africa, missions in Libya and the Horn of Africa are to follow. Ambassador Haber emphasised the notion that operations especially in the Horn of Africa are to be understood by means of their global reach and not in terms of solely inward African problems. As the Horn of Africa is an area of crucial importance for global trade, it is only natural that the EU as well as countries like Japan, China or Taiwan, show an interest in the region.

The first comment on Ambassador Haber’s presentation was given by Ms Anu Laamanen, Deputy Director General of the Political Department in the Finnish Ministry for Foreign Affairs, who thanked Ambassador Haber for his appraisal of the Finnish contributions to the CPCC and EU-based civilian crisis management missions. Ms Laamanen pointed out that small countries such as Finland face special challenges in recruiting adequate staff for missions. In addition to this, she stated that only by combined European practices these missions can be completed. However, against the odds of different backgrounds and training of staff from all over Europe, cooperation in the field has been very convincing. Ms Laamanen agreed with Ambassador Haber’s view, that civilian crisis management missions gain little publicity, while military-based missions attract significantly more media coverage.

In her comments, Dr Elisa Tarnaala, adviser to the Africa team of the Crisis Management Initiative (CMI), stressed that in the best case scenario, the outcome of conflict management is a lasting peace in the given area. Ms Tarnaala agreed with Ambassador Haber’s opinion that conflicts in Africa are not ‘typically’ African anymore, as there has been a notable shift in the 1990’s from solely internal violent conflicts to more transnational conflicts which involve non-state actors. These actors typically act in an environment in which state institutions cannot provide security for the population. The Al-Shabaab militia or Al-Qaeda factions in Africa serve as examples of this. The number of these groups is growing, all of which pursue different agendas such as economic interest or self-protection (e.g.). Colliding interests between these groups are almost inevitable, and as these take place within the geographical limits of conflict management missions and often affect the population, the developments deriving from this have to be taken into consideration in any conflict management approach. Holistic crisis management therefore has to aim at all relevant actors, if a conflict is to be resolved in terms of a lasting peace. As to this, there is a need to rethink strategies of conflict resolution that include and incorporate all aspects that stand at the centre of civilian crisis management operations. Dr Tarnaala expressed her conviction that new and creative ways of cooperation between NGOs and the EU can sustainably strengthen state institutions in conflict areas. 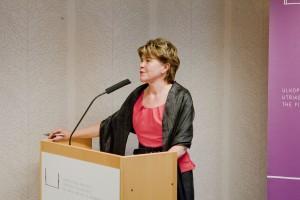 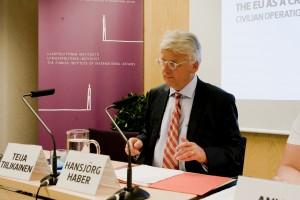 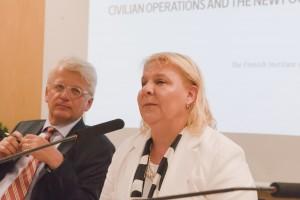 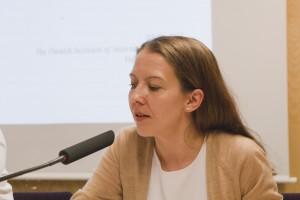