The seminar will focus on free trade agreements as a part of foreign policy and their implications. Recently the United States has concluded negotiations on the Asia-Pacific trade agreement (TPP) and continues the negotiations with European Union on the Transatlantic Partnership agreement (TTIP). The trade agreements in general are considered usually beneficial for strengthening relations between the countries and regions. While there are many shared mutual interests the TPP and TTIP have, however, faced opposition from many fronts. Further, the election year 2016 in the United States and the role of U.S. Congress in regard to the trade agreements create certain challenges for the processes. The seminar will look into the recent changes and the future of free trade including the foreign policy aspect of these agreements.
Speaker:
Dr. Earl H. Fry, Professor of Political Science and Endowed Professor of Canadian Studies, Brigham Young University
Comments:
Kristiina Helenius, CEO, AmCham Finland
Ville Kaitila, Researcher, ETLA
Chair:
Anna Kronlund, Senior Research Fellow, Finnish Institute of International Affairs

Dr. Anna Kronlund opened the seminar and introduced the speakers. Prof. Earl H. Fry began his speech by remarking that only Malaysia has ratified the TPP and other TPP member countries are still waiting for the ratification of the U.S. It is now being considered in the U.S. but it faces a lot of opposition. Another free trade agreement, the TTIP, is still in progress, and the 12th round of negotiations was recently concluded. The EU and the U.S. may reach an agreement before the end of this year. TTIP has a lot of similarities with CETA, a free trade agreement between the EU and Canada, in which they have already agreed to include an investor-state dispute settlement mechanism.  Donald Trump and Bernie Sanders have spoken against the free trade agreements and presidential candidates seem to be reluctant to touch upon the issue. At the same time, two-thirds of the Americans support the participation of the U.S. in the global economy. Fry added that the U.S. is also the largest export market for European companies and the TTIP agreement could facilitate greater foreign direct investment flows and supply-chain expansion.

Prof. Fry remarked that this presidential election year in the U.S. seems to be very different from the previous years. According to statistics, 70 percent of the Americans believe that their country is heading to the wrong direction even though the economy looks strong and the unemployment rate is low. Although new jobs are being created, many men with lower education remain unemployed. Americans are also concerned with globalization and the record-high movement of people. The U.S. has had resilience to survive the financial crisis but at the same time Schumpeterian creative destruction has for example terminated almost as many businesses as are being created. Right and left wing populism has gathered ground among people who are not satisfied with the current political system.

According to Prof. Fry, many things could complicate Trump’s campaign, including his tax forms, personal indiscretions in the past and his low ceiling of approval. He has not got half of the votes in any primary and the Republican establishment will try to keep him of winning in the Cleveland party convention. If Trump was to become the Republican nominee, Hillary Clinton could win the elections decisively, Prof. Fry said. Democrats could then also win seats in the Senate and in the House of Representatives.

Kristiina Helenius, CEO of AmCham Finland, noted that globalization has changed the nature of diplomacy. Diplomacy and economic statecraft are converging and national borders do not matter as much as they used to. The concept of free trade seems to be outdated because the global economy is no more about bilateral trade agreements but about cyber security, identity and global finances. Nationality does not define companies anymore and they do not shape their alterations in bilateral terms. In addition, the role of the private-public partnerships is changing.

Researcher Ville Kaitila from ETLA gave an economist’s point of view to the TTIP debate. He has studied the effects of the possible TTIP agreement on Finnish companies. Kaitila noted that liberalization lowers the barriers of trade and investment and decreases the cost of doing business. It does not mean removal of all regulation and domestic income distributing institutions remain important. In addition, Kaitila remarked that according to his studies, export-oriented small and medium-sized enterprises (SMEs) and customers would benefit the most from the TTIP agreement.

The keynote and the comments were followed by questions and answers. Questions were raised regarding the possible concession of the U.S. in the TTIP negotiations, what size of companies would benefit the most from the TTIP, and how to build global governance. Prof. Fry answered that of course the U.S. must also make concessions, but federalism makes things more complicated in that matter. He would like to see SMEs benefitting the most from the agreement, and he believes that free trade agreements are better than protectionism. Helenius added that SMEs are the strongest supporters of the TTIP. Regarding global governance Kaitila noted that it is a little bit odd that the EU and the U.S. do not already have an agreement in place. 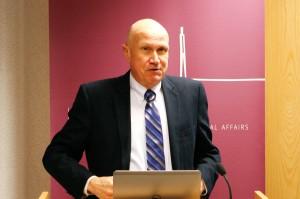 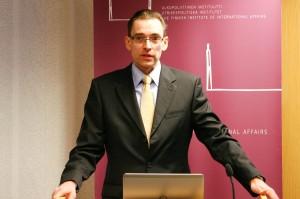 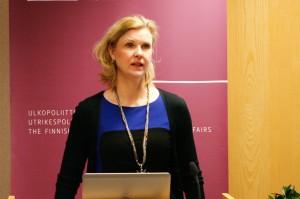