The increase in Russian defence expenditure has recently become an issue for discussion, and a source of concern in certain NATO and EU countries and professional networks. However, it is far from clear whether or not the Russian defence industry taken as a whole is capable of meeting the production targets set in the current State Armament Program. The failure would imply that Russia would not be able to meet the government’s goal of fielding a fully modernized military in the next 10-15 years. Yet, even underperformance in implementing the plans would not mean that Russia’s military will be weaker in 2020 than it is now. Quite the contrary: the replacement of large stocks of mostly old and worn-out Soviet-era weapons and equipment with smaller quantities of more modern equipment will greatly improve the Russian military’s capabilities.

The Finnish Institute of International Affairs is organizing a seminar which will look in more detail at the key sectors of Russian defence industry in order to understand better what results the changes in Russia’s defence procurement are likely to produce in the foreseeable future.

Dr Gorenburg ‘s areas of expertise include security issues, military affairs, and ethnic politics in Russia, Eurasia, and Eastern Europe. He has published numerous articles on these topics in policy publications such as Current History and in academic journals such as World Politics and Post-Soviet Affairs. Gorenburg is also editor of the journals Problems of Post-Communism and Russian Politics and Law and an associate at Harvard University’s Davis Center for Russian and Eurasian Studies. He has served as a consultant on Russian military and security issues for various agencies of the U.S. government and on ethnic and minority issues for the European Center for Minority Issues.

Dr Pynnöniemi’s recent research has focused on political contours of economic development in Russia, including the reforms of Russia’s defence industry. Her current research focuses on Russian critical infrastructure policies. She has published widely on Russian transport infrastructure modernization and its implications for the EU-Russia relations.

The seminar was opened by Dr Arkady Moshes, Programme Director at FIIA, with initial words of welcome. The modernization of Russia’s defence industry is becoming very topical, Moshes stated. Defence is one of the few sectors in Russia where we can talk about modernization these days. The debate is emotionally charged because developments take place in a certain political atmosphere. If we oversimplify a bit, we can distinguish two schools in the debate. According to the first one, all you have to look at is military capabilities, regardless of the intentions – which can change, and this spreads a fairly alarmist vision. According to the second one, you have to discuss capabilities of today’s Russia in a broader, wider political and economic context, which would then produce less ground to be alarmed.

After the introduction by Dr Moshes, Dr Dmitry Gorenburg, US scholar at the CNA think tank and associate at the Davis Center for Russian and Eurasian Studies at Harvard University, took the floor. Gorenburg stated in the very beginning that he will not talk about Russia’s military intentions but capabilities, focusing on Russia’s ambitious procurement plans. According to Gorenburg, the ability of the Russian government to carry out the State Armament Program for 2011-2020 is limited, so even in that context there is no need to be alarmed.

For Russian military companies it is more important to stay on the right political side than to be able to produce needed equipment. As long as political considerations outweigh cost and quality in procurement decisions, the industry’s ability to meet targets will remain suspect. Integration of defence industry into sectoral holdings was successful in early phases, as was seen in the Russian helicopter industry, but now we can see it hindering innovation, increasing costs and reducing quality. Chances of improvement will increase if the government restructures monopolistic holding companies and reforms the procurement system. However, neither outcome is likely in Russia’s current political climate.

Gorenburg then outlined procurement plans sector by sector. The strongest sectors are nuclear weapons, precision weapons and helicopters. However, even for those sectors it is virtually impossible to produce such amount of equipment at such pace as has been requested. Intermediate sectors include shipbuilding and fixed-wing aviation. The shipbuilding programme is significant but involves mostly smaller vessels. In the aviation sector the ”less glamorous” transport and refuelling aircrafts are going to improve significantly. There will also be 5thgeneration fighter aircraft in the next decade, which is a significant step.

The weakest sectors of the Russian military industry are the ones that were never strong in the Soviet Union. Those are especially electronics, but also armoured vehicles and air and space defence. However, from a very low starting point it is easy to make huge steps forward with electronics, and with the other sectors there is potential for quick recovery through investments.

Gorenburg concluded by stating that Russia is not able to fully modernize its military forces within the next 10-15 years as planned. However, the procurement programme will still lead to a major improvement of Russia’s military capabilities. It is better to have even a smaller amount of modern equipment than a huge stock of outdated ones.

Dr Katri Pynnöniemi, researcher at FIIA, made commentary remarks on Gorenburg’s presentation. According to Pynnöniemi, despite different views on the modernization of the Russian military industry there is still common agreement in three things.

First, the state armaments programme until 2020 and federal funding will boost modernization of Russia’s armaments and that of the defence industry. The bottom line is that Russian armed forces will have a ‘new look’ as the now almost infamous slogan of Serdyukov’s reform says.

Second, this is the famous BUT – given the list of problems, most importantly, degradation of production technologies, corruption, management problems and human resources, the defence industry will have major difficulties in fulfilling the objectives stated in the programme. Also, excessive secrecy makes it harder to improve the efficiency of the procurement process. Dmitry Rogozin likes to refer to automatic control mechanisms and to newfound understanding with the ministry of defence as steps to improve this situation.

Third, fulfilling the armaments programme and modernization of defence industry is a very expensive undertaking. Given the current economic outlook for Russia, and the subsequently high priority to maintain social stability in the country, we may expect further cuts to the defence budget. At least that would be the logical answer to be expected concerning the economic slowdown. However, political action is not necessarily logical in the simple understanding of the term.

Pynnöniemi also asked whether there can be modernization without restructuring. Especially interesting will be the fate of the Skolkovo innovation centre. If that project does not work out, how can the Russian military modernize either? If Skolkovo was earlier Russia’s locomotive of innovation, now it’s the military sector. This reflects a change in the political atmosphere.

After the commentary it was time for several questions, a couple of which are referred here. The first one concerned military intentions; after all, hardware is an instrument for implementation of policies. Gorenburg did not think that Russia would use its modernized military forces aggressively, but the huge modernization programme is partly superpower nostalgia and partly an effort to skip one generation of the industry. Another question concerned maintenance of military equipment in the field. Gorenburg explained that many repair contacts have little to do with quality but more with political connections. Further concern is caused by the lack of know-how about the maintenance of modern technology among the current generation of mechanics.

There was also a question concerning how Russia’s current economic development will limit the procurement plans. Even before we got the latest numbers of stagnating economic growth, Gorenburg explained, there was discussion about cutting or postponing the procurement programme. However, President Putin kept the modernization programme as priority. Still, there might be some cuts coming for the military sector as well.

Finally, there was a question about how Russians understand modernization: is it just about material modernization (new equipment) or also mental modernization (new thinking)? According to Gorenburg, both of these understandings exist. The material view is dominant among the military industry, whereas people in the Ministry of Defence are pushing for a different view on warfare. 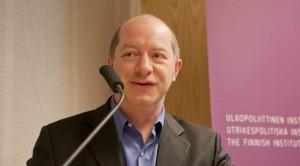 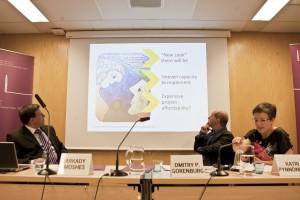