In his presentation, Professor Holger Mey discussed the recent and current changes in the security policy environment from a Western viewpoint by first looking at the changes taking place in the risk environment and then those taking place in the political security environment. In the risk environment, globalisation is producing increasing interdependence and shifts of power which, among other things, translate into asymmetric warfare and dissemination of Hi-Tech and weapons of mass destruction into the hands of new actors. In the political environment, the long-term trend has been that the share of defense in state budgets is decreasing. Other trends in this sphere are the professionalisation of armed forces, the requirement of no collateral damages and the increase in stabilisation operations “in between” which are characterised by having elements of many kinds of operations, such as war, peace-keeping and/or reconstruction.

The challenge of technology, according to Prof. Mey, is that although it is an important factor for armed forces, technology per se is not the key but its applicability, which is many times limited. In addition, responses to technological superiority are cheap but efficient, and without exposure of the enemy, technological solutions to fight it are often obsolete. Key to success is therefore developing skills and tactics. Moreover, in the future, Western forces will continue modernising and “becoming more Hi-tech” but so will the terrorists.

Professor Mey emphasised perceiving defense as an all-state activity. Nowadays those involved in defense and homeland security can include police forces, fire brigades, different ministries, medical troops and also the private sector. Also the “democratisation of threat”, which has become reality, means that anyone can produce a threat. The responses to asymmetric attacks, however, cannot be symmetric: For example, there is no symmetric response to terror attacks or refugee movements.

Another point Prof. Mey stressed was the importance of ground forces. The idea of operating from the air, with a few Hi-Tech forces is not sufficient, since, at the end of the day, only a threat to topple the regime or to control territory is what is most likely to produce sought results. Ground forces are therefore what matters and they should be supported by naval and air forces, not vice versa. According to Prof. Mey, all future conflicts will be manpower intensive, and therefore, skilled personnel in sufficient numbers will remain an essential element.

In the questions and answers part, such issues as motivation of the troops as an important factor for winning wars and whether the EU countries are investing enough in ground forces were brought up. Professor Mey agreed that motivation is a key element and that its importance rises the further the missions are located. He also foresaw a potential decrease in the current “popularity” of stabilization missions which require a lot of patience and a lot of resources—both in human and financial terms. As to the priority areas in defense funding, Prof. Mey said that the amount invested in armed forces should depend on what the state wants its soldiers to do: If there is a division of labour, for example delegating certain tasks of homeland security to the police, fire brigades or public health service, then less soldiers are needed. Often the final decision is left to the politicians to decide what areas can be covered in terms of budget. What is important, according to Prof. Mey, is that due to the nature of conflicts in the future, there have to be enough people: if one does not accept casualties, one does not go to war, since war is not a video game but it is about imposing one’s will on the enemy.

Holger H. Mey is the Head of Advanced Concepts, Defense and Security, European Aeronautic Defence and Space Company (EADS), Munich, Germany. Before joining EADS in June 2004, Prof. Mey worked for 12 years as a self-employed security policy analyst and consultant in Bonn, Germany. Among many other functions, Prof. Mey has served as President & CEO of the Institute for Strategic Analyses (ISA). Prof. Mey has published numerous articles in major security policy journals. He is editor, co-author and author of many books including “German Security Policy in the 21st Century”, 2004. 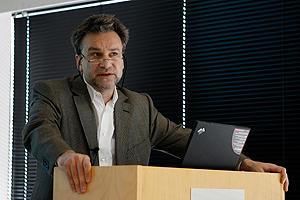 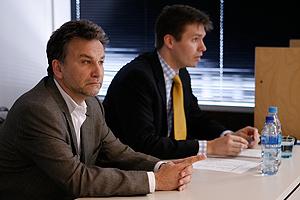