2009 was a turbulent year in British politics with the expenses scandal bringing politicians down to new levels of disrepute, the economy hobbled by the global financial crisis and continued in-fighting within the ruling Labour Party.

Received opinion was that the Conservative Party would win the 2010 general election, but widespread anger at ‘politics as usual’ has opened a door for the Liberal Democrats. A hung parliament remains a possibility meaning the parties would have to fashion some kind of coalition – a very rare event in British politics.

What the results mean for the rest of Europe? Will there be Tory Euroscepticism? The status quo of another Labour government, or possibly even a new European vocation pushed by a much strengthened Liberal Democrats?

The Finnish Institute of International Affairs seminar on the British general election took place as the results continued to come in. Unlike most British elections of the past, even 12 hours after the polls had closed, there was still no clear winner. Researcher Toby Archer started by arguing that this was the closest election for a generation and looked set to return a ‘hung parliament’, with no party having an overall majority. There has not been a hung parliament since 1974. Archer, presenting his briefing paper “No real winner? Britain’s closest election in a generation and the implications for Europe” to the audience, described the campaign over the last month. He noted in particular the novelty of the strong showing by the Liberal Democrats, the UK’s third party, and how the televised leaders’ debate had been central to propelling the Lib Dems leader, Nick Clegg, to prominence. But he suggested that one of the more interesting results of the night was that the Lib Dems had not performed nearly as strongly in the actual election as almost all the opinion polls had suggested they would.

Archer then went on to describe the European policies of the three major parties, and their foreign policy thinking more generally. The closeness of the elections and the absence of any one party with a majority mean that a coalition or some type of parliamentary alliance is the likely result. This brings into question to what extent are the policies of the different parties compatible? Archer suggested that on policy to the EU, a Labour-Liberal Democrat coalition would be a more natural fit, noting that some analysts have suggested that if the Conservative Party sought to form a coalition with the Liberal Democrats, EU policy could become the rock that such an alliance would founder on at some future point. Archer argued that the contemporary Conservative party is more Eurosceptic than when the party was last in government in the 1990s, although this has been to at least some degree obscured by David Cameron’s attempts to re-position his party closer to the centre of the British political spectrum. Archer also argued that although the Lib Dems are the most obviously pro-EU of the three major parties, the Labour government has been a cooperative European partner but due to Euroscepticism within the UK, has not sought to acknowledge this domestically.

Commenting was Dr. Jonathan Hadley of Helsinki University (Department of Social Research). Hadley considered the meaning of the election results from a more micro level than taken by Archer’s presentation. Hadley, basing his assessment in part on his former career as police officer in Essex and the eastern areas of London, talked about the failure of Labour as being a failure of promised social justice. He argued that in marginalized areas such as those he used to police, Labour’s coming to power in 1997 was greeted with relief and excitement, but in the intervening 13 years they have not fulfilled all the expectations put upon them. A swing away from Labour but split between other parties demonstrated a failure of any political party to offer a coherent vision for the future. Hadley believes this fits into a wider sense of the failure of political systems across Europe to make good on the promise of social justice and that the violent unrest in Greece is mostly about that. He fears that with economic problems spreading across the continent, there lies a difficult decade ahead and the inconclusive outcome of the British election is symptomatic of this sense of political drift. In particular Hadley warned that immigrants and others deemed to be outsiders may well become the target of more populist anger if the situation continues to deteriorate across Europe. 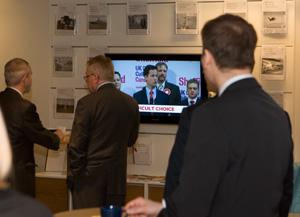 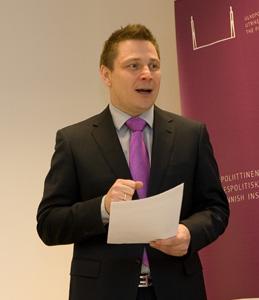 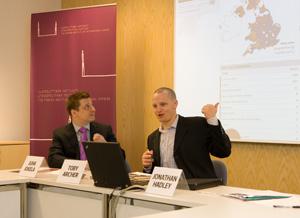 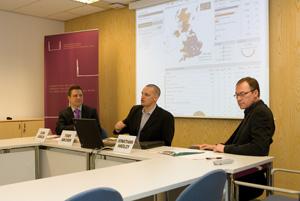 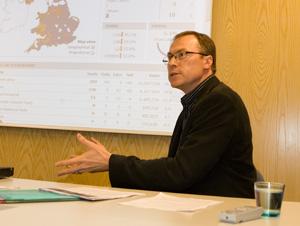 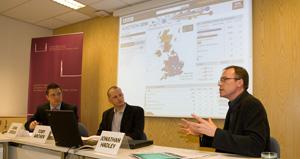 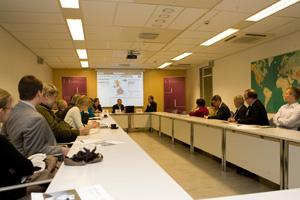 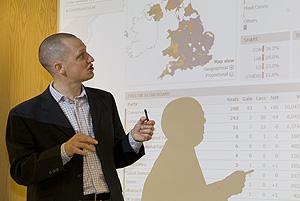