The functioning of the EU and the euro are being seriously tested by the economic and sovereign debt crisis. In the heated debate evoked by the crisis, the European Institutions have provided a framework of action with the Fiscal Compact in January 2012 and the Compact for Growth and employment in June 2012. Moreover, a Roadmap towards a deeper integration within the EMU was agreed. What are the means for safeguarding an all-European consensus about the future of the Union and how does this future look like? How should the Member States implement these agreements in terms of fiscal discipline and structural reforms?

Mario Monti is Prime Minister of Italy since 17 November 2011. He is life Senator appointed by Italian President Giorgio Napolitano on 9 November 2011. Monti served as a European Commissioner from 1995 to 1999 with the responsibility for the Internal Market, Services, Customs and Taxation and from 1999 to 2004 with the responsibility for Competition policy. Monti has also been Rector and President of Bocconi University in Milan.

Mr Ole Johansson, Chairman of the Board of the Confederation of Finnish Industries EK

Chairman of the Board of the Confederation of Finnish Industries Mr Ole Johansson opened the seminar by talking about the widely shared concern over the lack of growth in Europe. He presented the keynote speaker, Prime Minister of Italy Mr Mario Monti, as someone well equipped to address the question of how to move forward. The former EU Commissioner has acted as Prime Minister since November 2011, and his government has introduced reforms to combat the crisis, Mr Johansson said.

Prime Minister Monti first told how his personal history of working in European institutions began on the same day in 1995 as Finland’s EU accession. He commended Finland for its important contribution to the Union, consisting of its defence of a competitive open market economy, commitment to social issues, and respect for the law.

The Prime Minister emphasised growth as the key challenge currently faced by Europe. He wanted to visit Finland at this particular, delicate moment. It is delicate, he explained, not only because of the economic and legal aspects of the eurozone crisis, but because the euro, which was originally conceived as the culmination of European integration, now risks becoming a disintegrating factor in the mentalities of Europeans. He was concerned about a resurgence of prejudice and mutual skepticism. Even Italians are questioning the EU, the common currency and other European countries. The political leaders must therefore strive to reconcile the spirits of their citizens with the European project and with other parts of Europe. That is why painful measures should be justified by our concern for future generations, and should not be blamed on the EU.

The Prime Minister told that he had visited the Finnish Parliament the previous day. He noted that it is the national parliament most often quoted in discussions at the European Council, because no country more than Finland makes references to the constraints put in the democratic process by the national parliament, on the margins for manoeuvre of the government of Finland at the European Council. According to him, he and Prime Minister Katainen fully agreed with each other that further integration was needed to achieve growth. The European Single Market must be developed, and its rules must be enforced more firmly. He considered it psychologically important to show to the European citizens the Commission’s role as a watchdog ensuring every country’s equal compliance with the rules. The deepening of the Single Market includes the development of connections across borders in the fields of energy, ICT, and transport. In addition, the EMU must be revisited to give it more credibility.

Prime Minister Monti then gave an overview of the achievements of his government since November 2011, involving many reforms. In this endeavour, the government had the support of a parliament majority, composed of the three main parties which previously shared little common ground. The technocratic government has achieved a lot, being bolder than a political government in enacting measures. In terms of budget balance, Italy is fourth best in the EU, with a deficit of 2 % of the GDP in 2012 – a half of the EU average. A pension reform has also been carried out, increasing the retirement age to 67. The labour market has been made more flexible, and a liberalisation package has been adopted. A spending review for public administration is also underway. The Prime Minister expressed disappointment in the financial markets that have not recognised the merits of these policies. These same markets ‘went to sleep’ for a decade after the inception of the euro, but when they woke up, they failed to reflect the progress made by countries in their economic policies. Work is being done to improve the trustworthiness of the euro and the management of the eurozone.

The Prime Minister was worried that Finnish people might have misconceptions about Italy’s debt. According to him, Italy is in debt to itself, having a large public sector deficit. On the other hand, Italian citizens have a high private savings ratio and financial wealth, which cover much of the domestic debt, the Prime Minister said. Furthermore, Italy has not requested support from the European rescue institutions. He also pointed out Italy’s large contribution to the EU budget and the rescuing of the countries most affected by the crisis. He assured that the Italian government would be very unpopular if it were a political government, because they brought the fight against tax evasion to unprecedented degrees of intensity and visibility. Director of the Finnish Institute of International Affairs Dr Teija Tiilikainen presented her comments. She saw troubling signs of a polarisation of opinions in Europe on the EU and the common currency. The common threats faced by Europeans, which used to unify them, have now been overtaken by nationalistic sentiments and an emphasis on the differences in economic conditions. The big picture of shared risks and opportunities has been overshadowed by national interests. This is symptomatic of some underlying problem which must be addressed, or the entire European project is in danger of being destroyed, Dr Tiilikainen estimated.

She advocated a strengthening of the EU’s powers in economic and fiscal policies. Many steps have already been taken in this direction, such as the six-pack legislation and the establishment of financial stability mechanisms; other steps are still being debated. In Dr Tiilikainen’s view, for this stronger role of the Union to be legitimate, democratic mechanisms must be consolidated at the European level. The current role of the EU in economic policy is mainly a co-ordinating one, and competence belongs to the member states. This division of power must be reviewed, she said. The EU should have a competence subordinated to European elections, with the Commission as a true political government. A stronger political union would bring in the required political dimension to the Economic and Monetary Union. Alternatives for the EU’s economic policies should be clearly visible to European citizens.

Next, Mr Johansson made comments from the perspective of Finnish industries. For him, the road out of the crisis is through growth and the creation of jobs. Prospects for growth are not encouraging, however. Sluggish growth in the United States and some signs in Asia suggest that if Europe stays behind in competitiveness, it will face serious difficulties. Mr Johansson listed three steps for moving forward in this situation. The first one is the safeguarding of the euro, which has brought stability and predictability. The second step is improving public finances, which applies also to Finland. In this regard, Mr Johansson considered some of the measures undertaken in Italy to be exemplary. Thirdly, the single market should be developed and further opened. The digital single market is especially important.

The Finnish support for the common currency has been questioned, Mr Johansson said. Populist rhetoric has been rife in the midst of the crisis. While the basic benefits of the euro have not disappeared, uncertainty has increased. Mr Johansson called for urgent measures in order to solve the crisis and to improve competitiveness – the original purpose of the common currency. Each country has its own role: those who have lived beyond their means have to get their public finances in order. Fiscal measures are needed to support growth in the business community, he said. He argued that policy makers in Brussels have been restricting growth instead of promoting it. They should recognise the important role of businesses in creating jobs. Finland and Italy could work together towards these goals, he concluded.

A discussion ensued, which touched on a wide range of topics. Prime Minister Monti answered a question on the concrete steps towards strengthening the political union. He said that a collective control in the EU of the budgets of individual countries is already a step in the right direction. He agreed with Dr Tiilikainen on the need for an enhancement of visible democratic instruments in order to have a substantive political union. However, he had some reservations about the idea, implicit in this proposal, of making the EU-level political system more similar to the national democracies. The Prime Minister suggested that a malfunctioning of national political systems might lie at the root of much of the problems seen at the European level. He was not in favour of non-democratic models, but he said that short-term thinking and nationalism are growing. Further integration, while necessary, is not an easy concept for politicians to advocate when the next elections are looming ahead. Prime Minister Monti was also asked whether high interest rates could not be a positive thing for Italy, acting as a driving force for useful policies. He remarked that Italy now has far higher interest rates than before the recent reforms, and denied the long-term benefits. 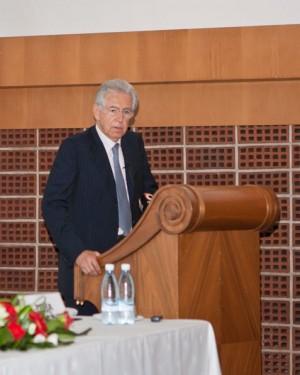 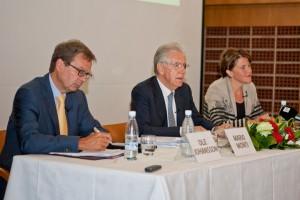