The United Nations climate change conference in Copenhagen in December 2009 has been set as the political deadline for establishing a comprehensive regime to follow up the Kyoto Protocol, which has established commitments for the majority of industrialized countries until 2012. In order to succeed in limiting dangerous climate change, the next regime must establish emission mitigation and limitation action not only in industrialized countries, but also in the major emerging economies. However, as a result of varying levels of development and divergent views concerning the dynamics of economic growth, these major emitters have very different approaches to global climate governance.

The seminar marked the launch of a FIIA report titled ‘Towards a new climate regime? Views of China, India, Japan, Russia and the United States on the road to Copenhagen.’

The seminar was opened by the Director of the International Politics of Natural Resources and the Environment Programme Tapani Vaahtoranta who welcomed the speakers and the audience.

Point Carbon Director Kristian Tangen welcomed positive developments in the United States in the form of the Obama administration’s novel approach. He stressed that a lengthy process still lay ahead – one that would most likely extend for some time after the Copenhagen negotiations round. Highlighting the overwhelming importance of the EU’s Emissions Trading System (ETS) and of Clean Development Mechanism (CDM) projects, he maintained that, given enough pressure from the EU and US, bringing 90% of global emissions into some form of carbon market by 2020 was not an unrealistic target, though he expressed skepticism about the likelihood of achieving the emission peak prior to 2020. He added that forest carbon sinks were likely to gain importance and that Joint Implementation (JI) projects, virtually insignificant at the moment, could eventually outpace CDM.

FIIA Senior Researcher Anna Korppoo opened up the country-specific segments of the seminar with Japan. The country’s position is defined by key industry-aligned groups’ perception that the Kyoto Protocol’s unfairly disregards energy efficiency improvements achieved in Japan before its 1990 base year. Fearing diminished competitiveness, Japan is pushing for the internalization of carbon prices in developing countries as well. It is also likely to announce a fairly un-ambitious mid-term target of around -7% to -15% relative to 1990. This position stems from an inability to reign in expanding energy consumption in the housing and transportation sectors, as well as from increased reliance on coal-fired power plants to replace nuclear power capacity taken offline after recent accidents.

Japan views itself as a political, economic and technological leader, but its track record is mixed. Though industries’ voluntary targets have been achieved, the process is criticized for its lack of transparency. For domestic emissions cuts the country relies heavily on forestry measures, while its three different emissions trading schemes are not set up as market instruments. Japan’s lack of enthusiasm for more progressive action on climate matters is linked intimately with the as of yet unclear position of the United States and China.

Antto Vihma, from the Finland Futures Research Center, traced the origins of India’s legalistic and defensive position to the country’s developmental challenges and identity as a developing country. Responsible for only 2% of historical emissions and with 44% of its population lacking access to electricity, India’s elites, split as they may be, are united in their view of development as an absolute overriding priority.

Emerging from a lengthy period of economic autarchy, India faces huge energy needs in the future. Currently its energy mix is dominated by primitive renewables and coal, the latter of which is to increase in the future. As such, India views absolute reductions to be out of the question and refuses to take less stringent obligations as well. Delhi is however likely to be keen on utilizing technology transfers to alter its energy mix.

Anna Korppoo returned to the podium to discuss Russia. Casting the country as a somewhat reluctant participant, she emphasized that Russia’s position in the upcoming negotiations was likely to be dependent on whether other parties would allow it to fulfill its reduction targets by retaining the excess emission allowances it gained as a side effect of the collapse of its economy during the 1990s. Sales of AAUs may be problematic because in Russia they are considered state property. Money flows from Kyoto Mechanisms – especially JI – are dwarfed by revenues from the sale of energy, and the physical threat posed by climate change has been absent from the agenda of the Russian leadership. However, the recent debate around the Russian ‘climate doctrine’ is showing a change in the official position of the country’s administration.

The costs of climate change have dominated the Russian headlines for the first time. Dr Korppoo stressed that these changes in Russia’s rhetoric should be recognized by the US and the EU in order to encourage further positive developments. The debate around the ‘climate doctrine’ suggests that previous views on the potential economic drawbacks due to emission reduction commitments find less support in Moscow today. Due to the disappointment related to its unfulfilled WTO accession which the EU promised to support in exchange for the ratification of the Kyoto Protocol, in the upcoming negotiations Russia is much less likely to accept such a gentleman’s agreement.

University of Michigan Researcher Johannes Urpelainen called for pragmatism from other negotiators when dealing with the United States. Given the recent transition to power by the Obama administration, expecting a clear position from the US would be unrealistic, due to the intricacies of its domestic politics and power struggles between the White House and Congress. Furthermore, he poured cold water on expectations that the US would live up to the Bali Action Plan or offer a commitment comparable to that of the EU, stating that it might at best be willing to commit to reductions to around the 1990 emissions level.

Dr Urpelainen noted that many powerful players in the US prefer to condition climate policies on economic recovery. Furthermore, he emphasized a general public unease and lack of understanding about how JI and the CDM function. He concluded that by the time of Copenhagen no more than the broad guidelines of the US’s position may become clear, and further in-depth negotiations would likely be unavoidable.

SIPRI Senior Researcher Linda Jakobson rounded off the country segments with a review of the position of China. The Chinese Communist Party is pursuing a delicate balancing act. On the one hand it does not want tackling climate change to deter economic growth, deemed imperative for the Party’s legitimacy, and on the other hand it strives to be a responsible international stakeholder. Though Chinese officials continuously remind outsiders that China is a victim of climate change, China has indeed implemented a serious climate agenda based on ambitious energy efficiency and clean energy policies. Beijing argues that it, like other developing countries, has yet to experience the high-emission stage of economic development.

Jakobson mentioned that there was a widespread, yet often unexpressed, opinion among Chinese bureaucrats that Western countries are using climate change as an excuse to prevent China from developing. Because of that, and because of the problems the Chinese economy is facing as a result of the global economic crisis, China is unlikely to commit to binding national emissions reduction targets in Copenhagen. Yet, Jakobson added, China would not want to be remembered as the obstructer of a international climate agreement and would not be the sole major emitter that was not included in a post 2012-regime. If countries responsible for historical cumulative emissions, especially the US, make firm and far-reaching commitments. China, along with Mexico, Brazil, South Africa and India, might consider increasing the depth and range of its climate change policies. China, like India, would like to see concrete action on technology transfers and commitments by developed countries to finance co-development of new technology

In the Q&A session speakers were asked to evaluate their respective country’s willingness to submit to a long-term vision, mid-term as well as sectoral targets.

China was argued to realize the importance of a long-term vision and to be willing to act as a responsible country as long as it was allowed to set the parameters. It essentially wishes developed countries to adopt more stringent targets before anything else, and might be willing to discuss the implementation of sectoral targets.

India, disappointed with Annex I leadership, was viewed as likely to continue its defensive position and not showing any signs of committing to anything, even under a sectoral scheme.

Russia was seen as lacking any long-term vision, but potentially willing to commit to a 15-30% target, especially if banking of excess emissions was allowed. Its support for sectoral targets is likely to be subject to what such targets would imply to Russia itself.

The US was said to agree with the EU on its longer-term vision, but it could not be expected to offer a mid-term commitment compatible with the latter’s expectations.

Regarding technology transfers, it was mentioned that the US would see them more as a result of some kind of carbon markets, especially due to concerns having to do with intellectual property rights (IPR). China would likely become more sensitive to IPR if it were allowed to participate in the co-development of new technologies in order to leapfrog to a low-carbon economy.

The Major Emitters project has focused on the current policy positions of the United States, Russia, China, Japan and India in the international negotiations for a post-2012 climate pact. The project has been funded by the Ministry of Environment and Ministry of Foreign Affairs of Finland.

Keynote speaker and chair: Mr. Kristian Tangen is Senior Partner and Director of Point Carbon and a specialist on the political and market aspects of the Kyoto Protocol. He has followed the Kyoto process closely from its starting phase. Mr Tangen has published numerous papers and analyses on a variety of political and corporate issues concerning emissions trading, climate change, the Kyoto Protocol, and other environmental issues.

Dr. Anna Korppoo is a Senior Researcher of FIIA’s research programme on the International Politics of Natural Resources and the Environment. She specializes in Russian and Eastern European climate politics as well as international climate regimes. She has followed the Kyoto process for almost a decade and published mainly policy-advice-oriented studies.

Ms. Linda Jakobson is Senior Rearcher of the China and Global Security project of the Stockholm International Peace Research Institute (SIPRI). Mrs Jakobson is an expert in the politics, societal development and foreign relations of China. Her most recent research topics include China’s energy security and climate policies.

Mr. Antto Vihma works as a Project Researcher and a Doctorate candidate in the Finland Futures Research Centre. He specializes in global climate governance and questions of effectiveness and legitimacy. Mr Vihma has a special interest in the UNFCCC negotiations, which he follows closely.

Dr. Johannes Urpelainen is an expert in international cooperation and environmental politics. He has recently completed a PhD degree at the University of Michigan. In addition to the climate policies of the United States he has written on the greenhouse gas reduction activities of individual states of the federation. Having completed his doctoral studies, he will join the Department of Political Science at Columbia University as an Assistant Professor in July 2009. 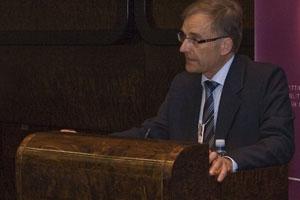 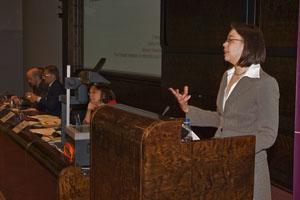 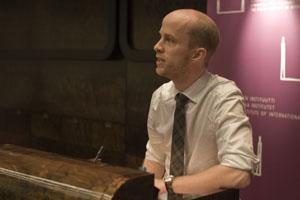 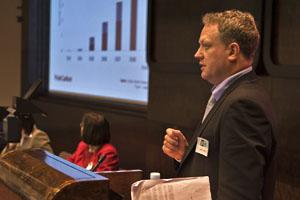 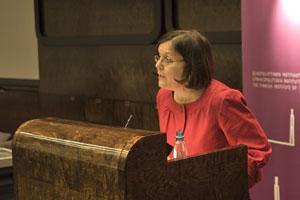 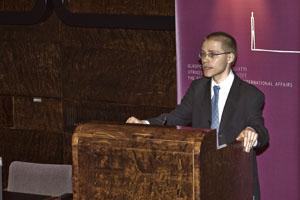 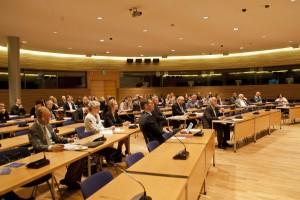 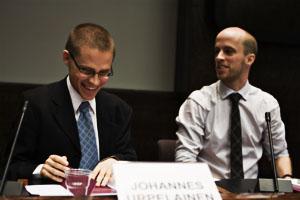