In 2011 the EU Foreign Affairs Council adopted a strategy towards the region of the Horn of Africa. Ever since,
it has been presented as an excellent example of the EU’s more regional focus and more strategic approach
towards the conflict prone region. This strategy that handles Sudan including Darfur, South Sudan, Somalia,
Ethiopia and Eritrea is indeed a wide framework of action, where EU underlines the need to work ”with the
region itself and with international partners to tackle the underlying causes of conflict” and ”to support local,
regional or international mediation efforts to resolve ongoing conflicts”. Is this strategy sufficient framework
for strengthening support for peace processes in the region where South Sudan became independent in 2011
and Somalia just held its first parliamentary and presidential elections since years?

Involvement of the states in the Horn of Africa to their neighbor’s affairs is more of a norm than exception. This
reality sets a framework for local actors and international actors alike. In this context, how should the EU, third
states or NGO’s best support the positive outcomes of mediation efforts and peace processes?

Dr Teija Tiilikainen, Director of the Finnish Institute of International Affairs, opened the seminar by welcoming the speakers and audience and by noting that peace in the Horn of Africa is of great importance not only to the region with its local actors but also to international actors such as the EU. She also stressed that it is important to the EU to have a system of regional strategies and special representatives, as it does for the Horn of Africa.

Mr Alexander Rondos, EU Special Representative to the Horn of Africa, begun his remarks by saying that it was very timely to discuss the topics of the seminar as the international community has to do some very careful thinking as to what its role in Somalia and the whole region is. He noted that Somalia is at a very interesting point at the moment, with many opportunities but also risks. Recent political developments in the country, with the selection of a parliament and the election of a president, suggest that there is a desire for change coming from within the country.

According to Mr Rondos, several challenges need to be considered as regards the balance in the Horn of Africa. There is a fundamental debate about the political fate of Somalia and the nature of federalism. The control over the country is still limited and the desire of parts of the country to be associated with the capital is also limited. Mr Rondos finds that the recent political developments of Somalia are good for the country, for the surrounding region and for global stability. Somalia was condemned a failed state by everyone, but thanks to a good strategy in place, something positive is now happening. The key at the moment to Somalia, Mr Rondos pointed out, is that the African Union has an active force in place, consisting of Somalia’s neighbors. Somalia´s neighboring countries have also been involved in a constant discussion and have actively engaged in Somalia’s situation through regional politics. The fundamental point Mr Rondos wanted to convey is that problems in one country cannot be resolved in isolation, without the surrounding region’s involvement. Kenya and Ethiopia are currently engaged in an active dialogue with the authorities in Somalia to avoid misunderstandings and to reassure the neighbors that their frontiers are safer. Kenya’s politics are affected by a very large presence of refugees from Somalia, who may be infiltrated by al-Shabab and other such forces.  Mr Rondos finds it essential that the region finds a way to communicate more efficiently among each other and that the international community moves beyond the rhetoric of strategies, stops being hostage to crises and helps build constituencies to find other, profitable options to conflict.

As the Special Representative, Mr Rondos has been asked to think about what could be a long-term political strategy for the Horn of Africa. He stressed that when looking at Somalia, local particularities need to be addressed and regional specificities have to be acknowledged. He suggested that in order to secure Somalia in helping to detoxify the region, serious meaning has to be given to local ownership. There is now a sovereign government in Somalia and the international community needs to find a way to help that government take more responsibility. The international community should give space to Somali politics to work out, help the President in encouraging reconciliation and to ensure the concrete move of the international actors to Somalia from the neighboring countries. The imminent goals in Somalia should be to avoid the country becoming a playground for competing security influences, to encourage reconciliation done by the Somalis, and to reintroduce Somalia into the international financial system to become an economically viable entity. Mr Rondos underlined that the major task is to put together a strategy for the region, to create a political and security architecture embedded in economic realities and projects leading to interdependency between the countries of the region. The question is whether the international community is able to think on a broader scale, because security in Somalia requires security and confidence building in the whole region.

Mr Rondos concluded with a comment on the EU itself. Various strands have been pulled together to create a strategy for Somalia which has led to progress. The EU has been able to maintain the humanitarian and development projects going, it has been financing AMISOM and the training of future Somali force and it conducted a very successful operation off-shore to contain piracy (EU NAVFOR Atalanta). He wanted to communicate that despite all the criticism it has faced, the EU has been successful in Somalia in creating a comprehensive strategy in a region vital to us. Now it is essential to look at the larger scale and to think at how the region could be stitched together.

The following panel was chaired by Dr Tanja Tamminen. The first member of the panel to give his comments was Mr Pekka Haavisto, Member of the Finnish Parliament and Special Representative of the Finnish Foreign Minister to the Horn of Africa. He joined Mr Rondos in criticizing the absence of the international community from Somalia, as actors and organisations still prefer residing in neighboring countries. He said he understood the questions from Turkey on that absence, Turkey itself being extremely active in Somalia and agreed that it would be very important to be present in the field, as the security situation in Mogadishu has already improved. Mr Haavisto mentioned a positive development among Finnish Somalis, some of whom now feel safe returning to Mogadishu with their families, and stressed that it is important to support their efforts in building and working for their country. He noted that the role of AMISOM and of the African Union has been crucial in the process of securing Somalia. Most recently Kismayo was released from al-Shabab control by government and AMISOM troops, which was a very important development as the port was financially important to al-Shabab. Mr Haavisto underlined that now it is important to move rapidly to support the government seriously. As to other challenges facing the Horn of Africa, Mr Haavisto pointed out that the EU should also look more carefully at the situation in Eritrea and its border disputes with Ethiopia. He also made a note on the situation in Sudan and South Sudan and warned that there is still a hidden agenda in the South to work against Bashir’s government, and the same can be said about the Darfur rebels. He continued by saying that it is positive that the EU is taking a more decisive role in solving conflicts and has more visibility in the region. Many countries still question the agenda of the US in the region and the EU is seen as more neutral. Mr Haavisto finished by saying that we should also push for more UN involvement in Somalia, to widen the scope past the political office (UNPOS) involvement to bring all the UN agencies to the ground in Somalia.

Mr Taisier Ali, the Director of the Peacebuilding Centre for the Horn of Africa in Asmara, Eritrea, made some brief comments and concrete suggestions on the region. He expressed several concerns on the challenges facing Somalia at the moment. According to Mr Ali the relapse into anarchy is an imminent threat in Somalia. Corruption remains an acute problem as agreements are made on the running ports and border controls. Another serious concern that remains is that of the militias and how to handle them. Mr Ali noted that unfortunately these questions and concerns are common in the whole Horn of Africa. He wished to underline that the fundamental point for understanding the crisis in the region is the inter-linkage between the countries, which are really a natural extension of each other. The region has a certain specificity that is essential to understand and appreciate and Mr Ali underlined that the historical relationship of the communities and their historical bonds should not be forgotten. There is a natural affinity at the level of the people, who feel member of the same cultural heritage. Mr Ali expressed his concern that Sudan is slowly sliding into the two worst case scenarios in Africa; on the one hand the state is becoming dysfunctional and heading towards collapse and on the other a serious return to ethnicity and tribalism is taking place, to a worse degree than in Somalia. Politics in Khartoum are not done on the government level but run by two dominant tribes. Mr Ali warned that this will lead into multiple mini-Rwanda type of situations, if not handled with care. He noted that also Kenya causes worries due to the upcoming elections. As to Eritrea, Mr Ali thinks it is one of the most misunderstood states in the region. It is relatively stable and the region needs that kind of balance and it should be built on. Mr Ali finished his comments by stressing that what is needed is a truly comprehensive approach for the Horn of Africa, because the problems of the region are interlocked. Somalia’s stability will not persist if the crises of the rest of the region are not resolved.

Mr Antti Pentikäinen, Executive Director of the Finn Church Aid, begun his comments by agreeing with Mr Haavisto in saying that Mr Rondos has succeeded in changing the face of the EU for the positive in a very significant way. He also agreed with Mr Ali that the terrible scenario of Sudan is unfortunately very likely, and reminded that being aware of this danger the international community will be responsible if it does nothing to prevent the disaster. He summarised the case of Somalia by stating that there is one goal which is that avoiding a new civil war. Mr Pentikäinen identified five elements for this to succeed: reconciliation on both national and regional levels; the construction of local administrations; dealing with al-Shabab; the new role of the EU presence in supporting the reconstruction; and finally the modus operandi needs to be changed through focusing the financial support to Somalia. Mr Pentikäinen noted that corruption is not only the problem of Somalia, but also of its neighboring countries and therefore it is advisable that aid given to Somalia is a process that takes place within the country, not through third states like Kenya.

In the questions and answers session several topics related to the presentations were discussed. There was a question about possible EU strategies to incorporate Turkey into its activities in trying to connect together the different actors in the region. Also the possibility of introducing the Nordic model of society and cooperation to East Africa was discussed. 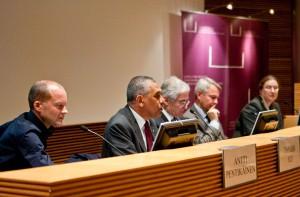 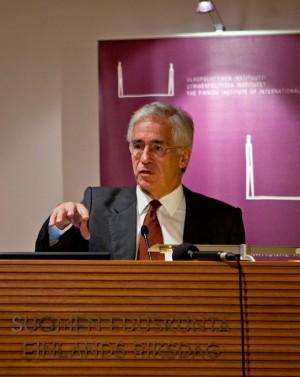 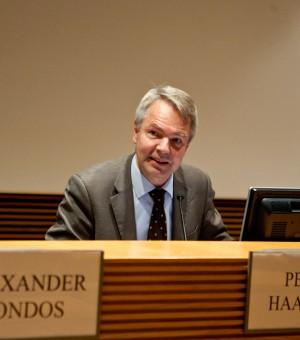 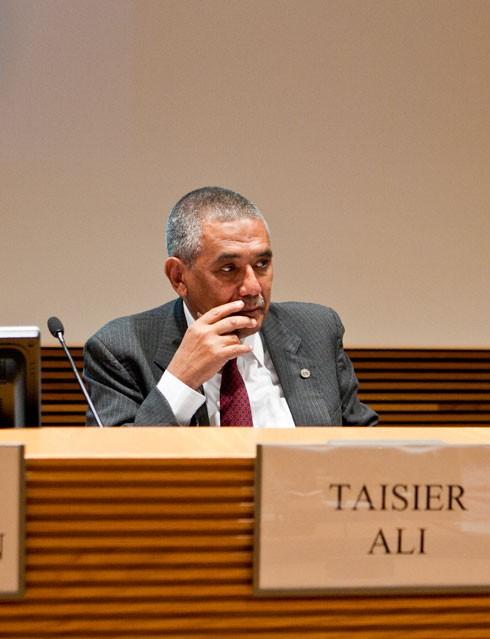 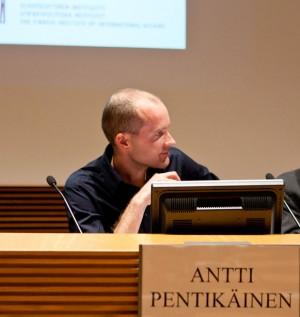