Framsida / Evenemang / Towards the ASEAN Community: Prospects and...
Dela med andra
Dela med andra
In 2003, leaders of the Association of Southeast Asian Nations decided to take steps to transform ASEAN into a stable, integrated and highly competitive region by establishing ASEAN Community, to be launched officially at the end of 2015. The ASEAN Community comprises three pillars, namely the ASEAN Political-Security Community, ASEAN Economic Community and ASEAN Socio-Cultural Community. With the aim of encouraging equitable economic development as well as reducing poverty and socio-economic disparities, ASEAN leaders have attached great importance to regional economic integration which will be realized through the creation of the ASEAN Economic Community (AEC). The aim of this seminar is to address core developments and challenges in ASEAN’s community-building process, with a special focus on the ASEAN Economic Community. Furthermore, the seminar will explore implications for the Asia-Pacific region, and consider opportunities for the EU.
Speaker:
Surin Pitsuwan, Former Secretary General of the Association of Southeast Asian Nations (ASEAN)
Dr Surin Pitsuwan has served as the Secretary General of ASEAN from 2008 to 2012. He has been an MP several terms and served as Minister of Foreign Affairs from 1997 to 2001. Dr Pitsuwan is engaged in the promotion of regional integration in East Asia and educational and political reforms in Thailand. He has garnered acclaim for spearheading and rallying the Asian countries in solving political and environmental crises in many East Asian countries. Dr Pitsuwan received his PhD from Harvard University in the field of Political Science and Middle Eastern Studies. He has been, and currently is, a member of various international advisory boards and functions in several bodies of international academic and political organizations. Furthermore, Dr Pitsuwan has been conferred 13 honorary doctorate degrees from universities across the world.
Comments:
Heli Simola, Senior Economist, Bank of Finland Institute for Economies in Transition BOFIT
Bart Gaens, Senior Research Fellow, the Finnish Institute of International Affairs
Chair:
Mika Aaltola, Programme Director, the Finnish Institute of International Affairs

In his presentation, Dr Surin Pitsuwan first briefly introduced the history of ASEAN. The regional organization came into being after the Bandung Afro-Asian conference of 1955, when the Southeast Asian countries felt that they needed something proportionate to the region. As a result ASEAN was established in 1967. Dr Pitsuwan emphasized ASEAN’s convening power: when it calls a meeting, everybody wants to attend, including the EU, Japan, Korea and China. Historical and political fissures divide many East Asian countries, but ASEAN is threatening to none and welcoming all. Throughout the 1980s and 1990s Southeast Asia was growing as a region constantly 8-9 % per year. At the end of the 1980s the idea of APEC was born. Australia sought to be connected with East Asia. Also Europe wanted to be part of this architecture, leading to the establishment of the Asia-Europe Meeting in 1996. In 2005, another architecture came into being, namely the East Asia Summit. It was intended to be a strategic, political and security forum at the highest level. Russia and the US were also admitted in 2010. Dr Pitsuwan stated that the EU is an inspiration, but not a model for ASEAN, as ASEAN has a totally different background. The ten member countries are extremely diverse. Despite the challenges in the countries, they have performed well economically, especially in the 1980s and early 1990s. The countries were growing even too fast, which caused the financial crisis of 1997. By carrying out some reforms after the crisis and by engaging with the IMF, the countries were performing better in 2003 than before the crisis. By that time, India and China started to grow and open up towards the open market system. The Southeast Asian countries realised the need for action. The solution was the ASEAN community. This economic community is based on four pillars: a single market, competitiveness, being equitable between and within the countries, and being able to integrate with the global market.

Dr Pitsuwan pointed out that the EU has an opportunity to participate in the growth, which will help ASEAN to become EU’s effective trading and investment partner. He mentioned that 70 % of the FDI which is flowing to ASEAN is going to the service sector, which means that the middle class and the purchasing power of ASEAN are growing strongly. One of the challenges in the area is socio-cultural diversity, which needs to be managed somehow, and here lessons can be drawn from the EU. There are also economic, political and security challenges. One economic challenge is that only 25 % of the trade is taking place inside the ASEAN countries. This figure should be increased, but that will be a big challenge. Another challenge mentioned by Dr Pitsuwan is that of science, technology and innovation. Only three ASEAN countries have made it to the high-income level: Singapore, Brunei and Malaysia. The rest of the countries are upper-middle, middle or lower-middle income countries. ASEAN is at risk of being caught in the middle-income trap. It is therefore vital to invest more in science, technology, innovation, and especially in education, in order to minimise that risk. Finland could help ASEAN countries with educational reform.

Finally, Dr Pitsuwan argued that ASEAN is right in the middle of the new centre of growth. ASEAN is currently engaged in the Regional Comprehensive Economic Partnership (RCEP) between ASEAN and six other countries (China, Japan, Korea, India, Australia and New Zealand). East Asia has become more important to the world now than it was ten years ago, and it has turned into the engine of growth. It needs to solve one issue and one challenge at a time. ASEAN can draw inspiration from Europe, but it has to manage growth in its own way. If ASEAN succeeds in what it has set out to achieve, at the very least the rest of the world will have one region less to worry about.

In her remarks, Ms Heli Simola stated that we should not compare the EU and ASEAN as such, because the starting points for integration and development have differed vastly, and the regions themselves are also very different. However, economically the EU is the most tightly integrated region in the world, so there is still a lot of potential in ASEAN countries for further integration in trade and in finance. One of the challenges is that the ASEAN countries are very heterogeneous in economic terms. ASEAN trade is heavily concentrated on the Asian market. Ms Simola pointed out that only in the past ten years we have seen a real increase in globalisation in truly global supply chains, especially in China. In the future, there are a lot of possibilities also for the ASEAN countries, especially regarding the cooperation between Europe, the US and ASEAN. ASEAN countries are already very important partners for the EU, but there will be a lot of potential for improvements in economic relations between the ASEAN countries and the EU.

In his remarks, Dr Bart Gaens introduced political and security-related aspects relating to the ASEAN community-building process. First, he mentioned ASEAN’s centrality in the East Asian regional security architecture. ASEAN has a need to contribute to peace and stability in Southeast Asia, but also in the wider East Asian region. He stated that ASEAN has contributed to stability in the region by promoting economic integration, but also by getting countries to sit around the table and to promote diplomacy. However, Dr Gaens argued that ASEAN is very weakly institutionalised. Perhaps ASEAN’s weakness is also one of its strengths. Because of the mutual distrust existing between other regional powers, the US, China and Japan, they have been able to accept ASEAN as being in the driving seat of regionalism. However, in view of increasing regional tensions, Dr Gaens questioned if this is sustainable in the longer term, and whether ASEAN centrality can be maintained in the longer run. Secondly, Dr Gaens brought up the so-called ASEAN way. ASEAN remains very strongly committed to the principle of non-interference and sovereignty of the individual member states. In recent years however, ASEAN has increasingly applied ”flexible engagement”. As one example of the success of this modified ASEAN way, the case of Myanmar can be mentioned. By engaging Myanmar in a more flexible way, ASEAN may have contributed to bringing about small changes and steps towards democracy in the country. The role of ASEAN’s soft power in Myanmar has certainly led to more results than the Western sanctions-based approach. One less successful example of the ASEAN way is Southeast Asia’s own refugee crisis, on which ASEAN has been fairly quiet and has not been able to respond collectively. Dr Gaens thus questioned how this ASEAN way would develop in the longer run. Thirdly, Dr Gaens brought up the EU. Dr Pitsuwan mentioned that the EU has been and remains an inspiration but not a model for ASEAN, but Dr Gaens asked if there are things that Europe can learn from ASEAN.

During the ensuing discussion time, questions were raised about the potential future military nature of the ASEAN Security Community (ASC); about the important role of the socio-cultural pillar to tackle diversity and promote deeper cooperation; about the possibilities for a more ”coherent” role for ASEAN in the South China Sea including the possible creation of a Code of Conduct; and about the future of free-trade negotiations in the Asia-Pacific, including the Transpacific Partnership (TPP). 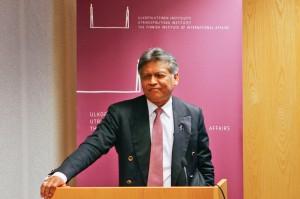 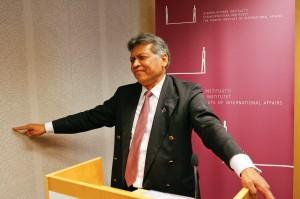 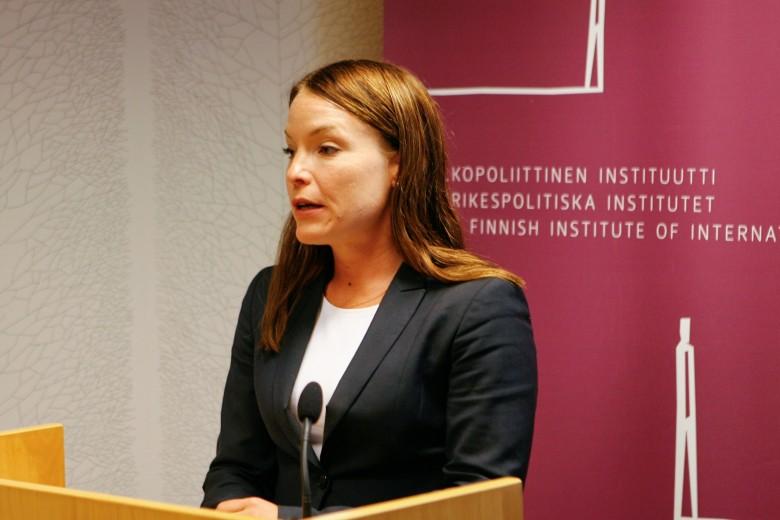 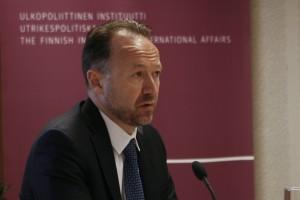