Framsida / Evenemang / Transatlantic Relations in a Post-Western World...
Dela med andra
Dela med andra
During the past decades, the transatlantic community has had a large impact on the global governance system. The Western liberal world order has been a prevailing model. However, there are many who claim that this era is in decline. The panel will examine this claim as well as the consequences of the post-Western era. On the one hand, the post-western can mean that power itself is transforming in such ways that all states are losing power to new processes and transnational dynamics. What is the political meaning of this power diffusion? How does it affect the U.S. position in the global hierarchy of old and new actors? How should we view state agency in this new situation? On the other hand, there are claims that power is flowing in a more traditional sense to new rising states. What is the role of BRICS in the new world order? Is it still defined by the American primacy or should we instead speak about a multipolar world? What is the role of the West? How will the global governance system reflect the underlying dynamics of power?
Opening remarks: Mika Aaltola, Programme Director, Center on US Politics and Power, the Finnish Institute of International Affairs
Keynote: Raymond Seitz, former U.S. Assistant Secretary of State for Europe
”A Messy Election in a Messy World”
Comments: Michael Haltzel, Visiting Senior Fellow, the Finnish Institute of International Affairs
Katarina Tracz, Director, Stockholm Free World Forum
Juha Käpylä, Senior Research Fellow, the Finnish Institute of International Affairs
Kaarle Nordenstreng, Professor Emeritus, University of Tampere
Teivo Teivainen, Professor, University of Helsinki
Chair: Teija Tiilikainen, Director, the Finnish Institute of International Affairs
Summary of the seminar:

Dr. Mika Aaltola, Programme Director at FIIA, opened the seminar and emphasized that the Center on US Politics and Power is the only research center in Finland and in the Nordic countries focusing solely on the global role of the U.S. Dr. Aaltola noted that the role of U.S. is still vital for the Nordic countries, as the Foreign Minister of Finland Timo Soini had remarked in his speech earlier that week.

Former U.S. Assistant Secretary of State for Europe Dr. Raymond Seitz, who comes from New Hampshire, U.S., remarked that his home state is a well-known voting state, as it hosts the first presidential primaries of the nation. The record holds that if a candidate does not come first or second in New Hampshire’s primaries, they do not make it into the White House. Even though most people expected an election between Jeb Bush and Hillary Clinton, Donald Trump and Bernie Sanders got sound victories in New Hampshire. Dr. Seitz described Trump as an ultimate political alpha dog, where Silvio Berlusconi meets Vladimir Putin. In addition, he sees Sanders as a flower child who is calling for an American revolution with a guillotine set up on Wall Street. Trump and Sanders represent two sides of the same coin. They are populists working on the emotions of frustrated Americans who see compromises as weaknesses and institutions as dysfunctional. Both candidates have also stressed that there is too much money in American politics, and Dr. Seitz believes that they are right in that. Candidates are both against the current political system and against the political establishment, and they play with the perception of American decline. They claim that America has overextended and enemies and friends have taken advantage of the U.S., Dr. Seitz said.

Even though Sanders is still campaigning, Dr. Seitz believes that the election will be between Trump and Clinton. This setup is extraordinary in many ways, as both candidates are the oldest candidates the U.S. has ever had, and they both come from the East Coast of the U.S. In addition, both are starting with the highest unfavorable polls ever.  Dr. Seitz reminds that the power of the new president will be limited by the Constitution and the separation of Powers. The new President will face a world where attitudes towards the Western values are hostile, where nationalism and authoritarianism are on the rise, and terror and civil wars threaten people. Dr. Seitz believes that Clinton’s foreign policy would be pragmatic and tactical, and that she would be a status quo president. When it comes to Trump, he considers it difficult to predict because he has not given many clues on his foreign policy objectives and means.

Director Teija Tiilikainen gave the floor to the commentators. FIIA’s Visiting Senior Fellow Dr. Michael Haltzel remarked that the media has exaggerated the alienation in the U.S. The Republican Party has had a systematic campaign to delegitimize the institutions by underfunding them and making it difficult to pass legislation, said Dr. Haltzel. He agreed with Dr. Seitz that Clinton would be pragmatic in her foreign policies should she become president. He noted that Trump’s political views are more attitudes than real policies, and his deal-making mentality could become problematic. Dr. Haltzel thinks that it is frightening that Trump wants to diminish the involvement of the U.S. in the world, and he has said for instance that the protection of South Korea by the U.S. does not benefit the U.S. in any way. Trump seems to be xenophobic and isolationist in his foreign policy views and he advocates a strong America, Dr. Haltzel concluded.

Katarina Tracz, the Director of the Stockholm Free World Forum, said that five years ago the world was characterized by optimism and not many people saw threats against liberal democracy.  Today these threats are apparent and serious. She sees four imminent threats, of which the rise of ISIS and violent extremism is the first. Now we are in a situation, where a terrorist organization has its own territory and is capable of conducting mass attacks in other regions. It is not only a regional problem but also a domestic problem within the EU countries, because the ideology attracts young people in our societies too, Ms. Tracz said. Another threat is the aggression and propaganda of Russia, to which NATO and the U.S. have reacted slowly. A third threat is the refugee crisis which has unveiled the inability of the European countries to control their borders and which threatens European unity. The fourth and most serious threat according Ms. Tracz is growing populism. We need skills to handle future crises and to develop our societies. Tracz pointed out that if we had Marine Le Pen as the President of France, Donald Trump in the White House, and Britain left the EU, it would deeply affect our values.

FIIA’s Senior Research Fellow Dr. Juha Käpylä noted that the research in FIIA on the Western liberal world order has focused on global flows and geoeconomics. Growing interdependence and economic integration has influenced the foreign policies of the European countries and even though it is highly beneficial, it also carries new risks, said Dr. Käpylä. For example, the length and complexity of value chains across borders and bottlenecks in supply chains increase vulnerabilities. Dr. Käpylä remarked that power struggles between the countries still exist, but they now take geoeconomic forms. Financial linkages, trade relations and the Internet can now be used as strategic tools, as we have seen happen between the EU and Russia. Infrastructure and institutional competitions are also part of the geoeconomic game. For example China is building a new Silk Road to enhance its own economy and to gain higher influence over its neighbors. Institutional competition can be seen for example in the attempts of Western countries to establish the rules of the game in world economy, Dr. Käpylä said.

Dr. Kaarle Nordenstreng, Professor Emeritus from the University of Tampere, addressed four key claims on the Western liberal world order. Western liberalism is claimed to be a myth, because classics of liberal thinking do not advocate a free marketplace. According to Dr. Nordenstreng, liberalism is rather social democracy. Secondly, it is claimed that Western liberalism is under a challenge. Dr. Nordenstreng remarked that power is transforming and flowing out of Western centers, and public opinion gains more power. Social sciences and humanities seem to be inspired by De-Westernization, but Dr. Nordenstreng noted that hegemonies tend to be broken by critical intellect, and being critical is tricky business. The fourth claim holds that BRICS are a symptom and an instrument of the making of a new world order. Dr. Nordenstreng remarked that BRICS may not be a viable concept in economic and political spheres, as the economies and the political leaders of these countries face numerous challenges.

Dr. Teivo Teivainen, Professor from the University of Helsinki, remarked that it is misleading to call the U.S.-led hegemony a liberal world order, because the current capitalistic and property-based order is not a liberal one. He sees human rights as a basis for liberal ideas of freedom, and considers that the government of the U.S. is not committed to human rights. Dr. Teivainen thinks that the hegemony of the U.S. and the state-centric world order are in crisis, but still in military terms U.S. remains powerful, and states are not withering away. He does not agree with Dr. Nordenstreng, who said that public opinion has become a second superpower. Dr. Teivainen said that the civil society has not gotten its act together. Instead, international corporations seem to have more and more power and they contest the role of the states, he stated. The U.S. could put into practice liberal and democratic ideals in multilateral organizations. Today’s challenge from ISIS and elsewhere is not against the liberal ideas as such, but against the hypocritical way the West has used them, Teivainen concluded.

Dr. Tiilikainen then opened the floor for questions. They concerned Putin and Trump, ISIS, the American electorate, Obama’s disengagement policy towards the Middle East, transnational populism, and the wellbeing of the Transatlantic relationship. Dr. Seitz commented Dr. Teivainen’s views that in the primaries, big money seems to be losing and the dollar does not run everything. The American electorate is unsatisfied as they will be less well off than the previous generation was and they are protesting against business as usual. When it comes to the Middle East, Clinton’s team seems to start developing a strategy towards it. The best option would be contact and cooperation between the U.S. and Iran, but Dr. Seitz noted that Iran has been undermining the development themselves by funding Hamas. The peace process between Israel and Palestine has run out of gas, he said, and it needs to be based on compromises. Dr. Seitz concluded by thanking Putin for enhancing the Transatlantic relations. Dr. Haltzel commented that Trump and Putin are both authoritarian personalities. He also noted that it is not easy to understand Islamic values when the two sects, Shias and Sunnis are not getting along themselves, and that the U.S. has managed to lessen the dependency from the Middle East’s energy because of its domestic technological development. 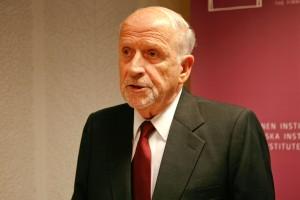 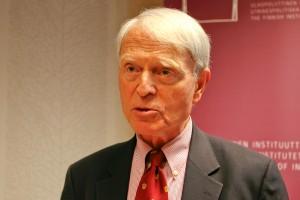 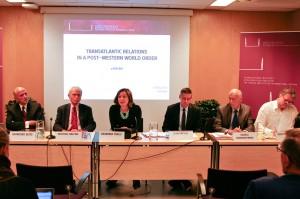 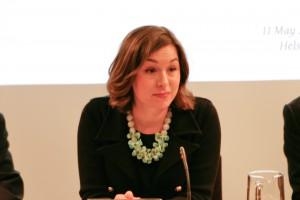 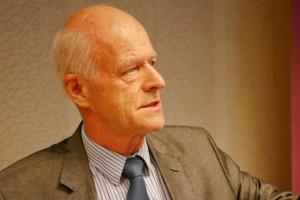 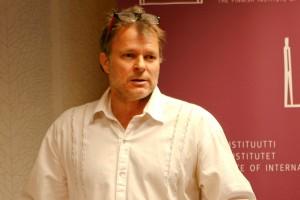