After the end of the Second World War, the Atlantic Alliance linked the United States’ and Europe’s security and defense. The pattern of cooperation – initiated during the Cold War – continued even after the collapse of the Soviet Union, as NATO expanded eastwards to include former enemies. Despite repeated moments of tension and inherent challenges, the transatlantic community endures. What are the motivations of continued transatlantic security cooperation? Does the U.S. still have interest in Europe? Is European dependency on U.S. security likely to continue? And what has been the impact of “out-of-area” issues on the cohesion of the transatlantic community?

This event will mark the launch of The Routledge Handbook of Transatlantic Security.

Prof. Jussi Hanhimäki, Professor of International History and Politics, The Graduate Institute, Geneva, and Finland Distinguished Professor, University of Tampere
Editor of the book and author of the chapter: The Obama Administration and Transatlantic security: Problems and Prospects

Prof. Wolfgang Krieger, Alfred-Grosser Visiting Professor, Sciences-Po, Paris and Professor of History of International Relations, Universität Marburg
Author of the chapter: The road to Saint-Malo: Germany and EU-NATO Relations after the Cold War

Dr Barbara Zanchetta, Researcher, The Finnish Institute of International Affairs
Author of the chapter: The United States and the ‘Loss’ of Iran: Repercussions on Transatlantic Security

Dr Teija Tiilikainen opened the seminar by welcoming the participants and the speakers. She underlined the importance of the transatlantic relationship as a community of values, with common institutions and shared interests. She also praised the scientific content of The Routledge Handbook of Transatlantic Security – around which the seminar was organized to mark its launch.

Mr Pertti Salolainen, who chaired the event, then welcomed the audience and introduced the speakers. Dr Barbara Zanchetta, author of the chapter The United States and the ‘Loss’ of Iran: Repercussions on Transatlantic Security, gave the first presentation. Dr Zanchetta’s talk focused on two inter-related points: NATO and the “out of area” issue, and the troubled relationship between the United States and Iran. After the 9/11 terrorist attacks, NATO for the first time invoked Article V of the treaty and, on this basis, embarked in its first ever truly out of area mission in Afghanistan. Today, the idea that the security of NATO member states is linked to the stability of areas outside the North Atlantic territory is a recognized fact. However, it was only in the early 1980s that this concept was formally addressed by NATO, as a consequence of the Iranian revolution and the Soviet invasion of Afghanistan. After 1979, the United States lost its major ally in the region and started to conceive means of direct intervention in defense of the Persian Gulf. This had great repercussions on Europe, it being the operational theater closest to the area and the one most affected by the potential deployment of US troops to the Gulf. While NATO member states agreed to “consult, facilitate and compensate” on future out of area challenges, the practical implementation of this formula remained uncertain. Dr Zanchetta concluded by stressing that better coordination and compensation (i.e. burden sharing) is still a central issue today, as the Alliance continues to consider the stability of Southwest Asia of crucial importance for the security of its member states.

The second speaker of the seminar was Prof. Wolfgang Krieger, author of the chapter The Road to Malo: Germany and EU-NATO Relations after the Cold War. In his talk he focused on Germany and the 1998 Anglo-French meeting at Saint-Malo. The meeting between French President Jacques Chirac and British Prime Minister Tony Blair in December of 1998 concerned a number of issues which are still relevant today. The essential question discussed at Saint-Malo was about the future role of the European Union in defense and security policy. While Blair was generally more willing than his predecessors to integrate Britain into EU structures, in defense and security matters he wanted to maintain the predominance of NATO and of the Western European Union, thus putting a strict limit on any EU role in foreign and defense policies. Today, with the treaties of Amsterdam and Lisbon, and with the disappearance of the WEU, things have changed a great deal. Prof. Krieger, however, underlined that a complicated relationship between the EU and NATO still remains when it comes to crisis management and military operations outside the NATO area. The new strategic concept, to be discussed by NATO members this coming November at a meeting in Lisbon; the future relationship with Russia, as well as a whole range of institutional conflicts between NATO, the EU and national defense policies are all crucial topics that remain on the international agenda.

The third speaker, Mr Pertti Torstila, provided a policymaker perspective on current transatlantic security issues. He underlined how transatlantic security is based on US involvement in the security of Europe, and that NATO has a special role in it. It is in the European interest to ensure that the US remains committed to Europe through NATO, EU-US cooperation, OSCE and other bilateral engagements. NATO’s objectives for international stability and security are compatible with those of the EU. Finland supports close EU-NATO cooperation, as well as the development of a genuine partnership with Russia, Mr Torstila noted. He also pointed to the importance of the Europe-America-Russia link as one of the main factors determining the state of world politics.

The final speaker was Prof. Jussi Hanhimäki, editor of the book in question and author of the chapter The Obama Administration and Transatlantic Security: Problems and Prospects. After briefly introducing the book, Prof. Hanhimäki underlined the excessive public expectations at the beginning of the Obama administration. While Obama was labelled the “world’s president,” he faced a set of difficult challenges ranging from the economic crisis, to non-proliferation, Afghanistan, Iraq, and the Middle East. Would the incoming president deliver the “change” promised during the campaign, or would there be continuity in the main lines of US foreign policy? Despite the undisputed change in the tone of American diplomacy and the shift in priorities from Iraq to Afghanistan, Prof. Hanhimäki stressed the continuity of policies that are based on American security interests. The escalation of the US presence in Afghanistan was a unilateral American decision. Although NATO support and cooperation is repeatedly underscored in Washington, America has and will remain determined to pursue its course even alone if necessary. Prof. Hanhimäki concluded by pointing to the dichotomy between the decreasing popularity of the Obama administration in the United States and its continued positive image in Europe. As the expectations have given way to some disillusionment, Obama’s leadership is still called for worldwide. But it will become increasingly difficult to deliver real change in the complex foreign policy challenges still hindering US foreign policy. 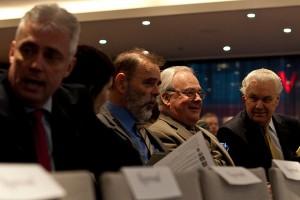 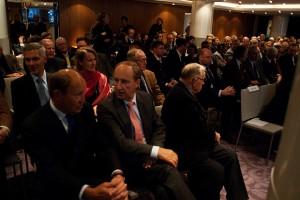 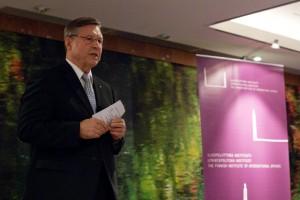 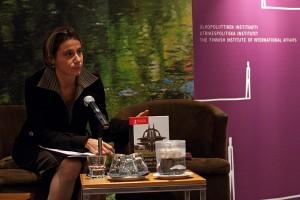 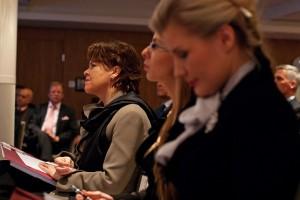 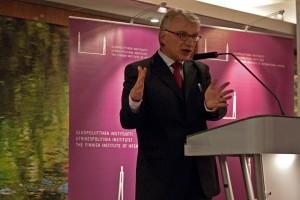 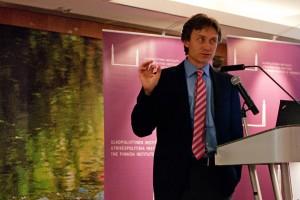 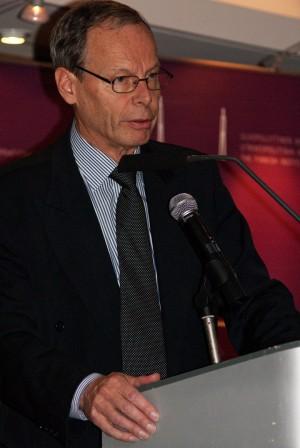 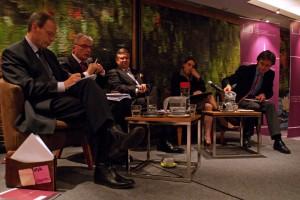