Framsida / Evenemang / Transatlantic Security Relations
Dela med andra
Dela med andra
Recent issues in transatlantic relations have ranged from the economic cooperation taking the form of the TTIP free trade agreement to the question of security relations, in particular after the US rebalancing towards Asia and the current developments in Ukraine. The relations between the European Union and the United States are based on the values of the liberal order and on common interests. However, despite the shared interests and values, there are differing points of view which have an effect on the relations in the transatlantic sphere. The seminar will focus on the changing dynamics of transatlantic security relations and in particular the major issues in the relations between the EU and the US.
Speaker:

Mark S. Sheetz (US) holds the Fulbright-NATO Chair of Security Studies at the College of Europe for the academic year 2014-15. He has been teaching international politics for over fifteen years. Prior to arriving at the College of Europe he taught at Williams College in Williamstown, Massachusetts, where he offered courses in American Foreign Policy and World Politics in the Nuclear Age. He has also taught various courses at Dartmouth College, Boston College, and Wesleyan University. In addition, he has taught courses for career diplomats and military officers at the Geneva Centre for Security Policy in Switzerland. Mark Sheetz received a PhD and an MPhil in Political Science from Columbia University, an MA in International Relations from The Johns Hopkins School of International Studies, and an AB in Government from Dartmouth College.

Professor Rani-Henrik Andersson opened the seminar by welcoming Professor Mark Sheetz, the current Fulbright-NATO Chair of Security Studies at the College of Europe.

Prof. Sheetz began his presentation by pointing out that he would discuss post-Cold War security developments and issues from both the American and European perspectives. He also pledged to reflect on how essential Europe is for U.S. security and vice versa. Sheetz identified the collapse of the Soviet Union as a key turning point in transatlantic security.  The end of the Soviet threat, according to Sheetz, meant that NATO suddenly had no purpose. This resulted in re-evaluations of the purpose and main duties of NATO, which could now be seen as the prevention of humanitarian crises and the maintenance of international ‘stability’. From here, Sheetz stated that NATO has since expanded to several European countries. He then presented his views on why an expansion of NATO was advocated by the US in the aftermath of the end of the Cold War. Both Democrats and Republicans saw it as a unique opportunity to remake the world in the ‘American image’ and through American military leadership. While the Democrats were mainly seeking a world devoid of conflicts and an expansion of democracy, the Republicans wanted to exploit Russian weakness by widening ‘buffer zones’ and developing their chances to intervene in order to interrupt new regimes. The expansion was generally not expected to provoke Russia, which Sheetz identified as a grevious mistake, as demonstrated by the current crisis in Ukraine.

For the remainder of the presentation, Dr Sheetz reflected on what he considered as the main issues related to security cooperation between the U.S. and its European NATO allies. Firstly, Sheetz argued that the two sides tend to have a different approach to dealing with conflicts and threats. Americans, unlike their European counterparts, tend not to view diplomacy as the best solution, and instead consider the use of force as a more efficient means of maintaining international order. The focus of the EU, conversely, is on conflict prevention by functioning as a so-called ‘normative power’ which uses international law over force to deal with conflicts. Sheetz illustrated these differences in approach by indicating that the U.S., even with the leadership of Obama, has recently been willing to provide weapons to Ukraine in attempt to intervene in the crisis, whereas European leaders, including Merkel, have maintained that the conflict cannot be solved militarily. The EU is thus trying to find an alternative to delay actions by the U.S., who are getting impatient and uninterested in compromise. The EU sanctions against Russia, according to Sheetz, were implemented first and foremost to ‘stave off an aggressive American response’.

Secondly, Dr Sheetz argued that some of the NATO allies have borne the burden of cooperation while others have been able to ‘ride free’. The U.S. covers 75% of the NATO budget, while among the European allies, barring a few exceptions each country’s defence spending falls below the NATO guideline of 2% of GDP. Furthermore, most of these countries keep reducing their budgets, which according to Sheetz is based on their belief that that they can keep relying on the military force of the U.S. Sheetz illustrated this by identifying that the Libyan War in 2011 provided an opportunity for the EU to take the initiative which the U.S. was reluctant to do, but the European allies failed to act as they were either unwilling to interfere through air strikes or simply ran out of arms, thus having to call for American help.

Dr Sheetz concluded that for these reasons the U.S. is discouraged by the EU allies who are reluctant to take on conflicts, and is unwilling to accept a ‘division of labour’ in which Europeans act as ‘peacekeepers’ and Americans as ‘warriors’. Lastly, Sheetz pointed out that the Secretary General of NATO being European does not even things out, because his power is marginal compared to the power of the American SACEUR. 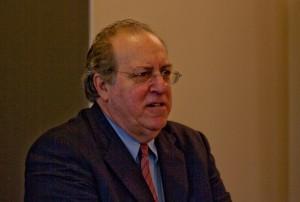 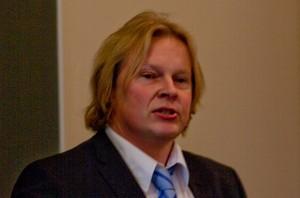