Turkmenistan holds the world’s fourth largest proven reserves of gas, and has hence become an extremely important actor in the geopolitics of Eurasia. While Turkmen gas is now sold primarily to China and Russia, the European Union is keen on securing some of these resources in order to diversify its energy partners. However, the authoritarian nature of Turkmenistan’s regime casts doubts on the EU’s capability to achieve its economic objectives while pursuing a normative foreign policy. How is the Turkmen regime evolving and how does it use its energy resources in the foreign policy arena? Will the EU, with its new Strategy for Central Asia, succeed in achieving its strategic interests within a normative framework? And what is the role of the other regional powers – China, Russia, Iran – in the Turkmen conundrum?

Speaker: Luca Anceschi, Lecturer in Central Asian Studies, the University of Glasgow
Luca Anceschi is Lecturer in Central Asian Studies at the University of Glasgow. A graduate of the University of Napoli L’Orientale and of La Trobe University (Melbourne, Australia), his research has been mostly concerned with the Politics and International Relations of post-Soviet Central Asia. His first book, Turkmenistan’s foreign policy – Positive Neutrality and the Consolidation of the Turkmen regime (Routledge 2008), represented the first book-length account of Turkmenistani foreign policy published in Western languages. His articles have appeared on Central Asian Survey, Europe-Asia Studies, Nationalities Papers,and the Journal of Arabian Studies. He is currently completing a monograph entitled Kazakhstan’s foreign policy – Regime neo-Eurasianism in the Nazarbaev era (forthcoming with Routledge).
Chair: Marco Siddi, Senior Research Fellow, the Finnish Institute of International Affairs
For further information, please contact: Marie-Louise Hindsberg, tel. +358 9 432 7712, marie-louise.hindsberg@fiia.fi

Marco Siddi, Senior Research Fellow at the Finnish Institute of International Affairs, opened the seminar. He remarked that Central Asia is a region of great strategic importance for Europe as well as for Russia and China. He noted that Turkmenistan has become an extremely important actor in the geopolitics of Central Asia.

Luca Anceschi, Lecturer in Central Asian Studies at the University of Glasgow, analysed Turkmenistan’s difficult situation combining domestic and international policy. He also remarked that the European Union’s normative push in Central Asia has come to a halt, emphasising that the EU has failed to diversify its interests in the area and has, on the other hand, ignored the domestic policies. Dr Anceschi first noted that we never hear about Turkmenistan, and when we do, it is always for a wrong reason. Having the fourth largest natural gas resources in the world, Turkmenistan is the biggest gas producer and exporter in Central Asia. Geography is, however, an obstacle for the country’s exports.

According to Dr Anceschi, Turkmenistan’s economic structure has not changed significantly since the fall of the Soviet Union. Cotton and gas remained the country’s main exports, gas being the most significant while cotton was eventually abandoned. Western companies have not been allowed to explore the gas fields, whereas the Chinese have. The state still holds a majority of shares in Turkmen gas companies. Until the year 2008, Turkmenistan had only one gas pipeline, a Soviet-era pipeline exporting gas to Ukraine and Russia. However, Turkmenistan was involved in every gas pipeline project in Central Asia for the last 25 years, and in 2009 the country finally managed to decrease dependence on Russia by opening a pipeline to China and thus breaking Gazprom’s monopoly. Although the new pipeline was a step towards diversification, Dr Anceschi stated that even with it, Turkmenistan is currently exporting less gas that it did in 2008, as the volume traded with China has not reached the level of gas formerly exported to Russia.

Dr Anceschi noted that while Turkmenistan’s energy policy aims for diversification of customers, in the current situation it is dramatically dependent on very few of them. While Russia’s role is decreasing, China is acquiring a much stronger position. Dr Anceschi also introduced a scenario in which – following Gazprom’s announcement of ceasing gas imports from Turkmenistan in 2025 – hundred percent of the country’s future gas trade will be done with China. He stated that currently Turkmenistan’s returns from trading with China are used to clear the country’s debts with Beijing, and therefore it will not be making any profit for a while.

Dr Anceschi highlighted the eccentric golden statue of President Berdymukhammedov as an example of the Turkmen government’s efforts to shift the focus away from the country’s difficult economic situation. He also noted that the gas revenues are critical not only for subsidies but also for sustaining the corruption among the country’s narrow elite. According to Dr Anceschi, the current president has lost popularity and, in the people’s eyes, he seems weaker than his predecessor. Dr Anceschi also mentioned that recently there have been food riots and workers’ protests. He suggested that this could impact negatively on the regime and its ability to stay in power, and also contemplated whether this could be the moment for the EU.

Dr Anceschi stated that Turkmenistan really needs buyers for its gas. He noted that there have been plans for a Trans-Caspian gas pipeline to Baku, Azerbaijan, although they are not likely to materialise as Gazprom would strongly oppose it. Dr Anceschi argued that the EU has failed to diversify its economic interests in Turkmenistan and Central Asia, and is currently importing as much from Kazakhstan as from Saudi Arabia. Visualising a scenario where Turkmen gas goes to Europe, Dr Anceschi contemplated whether the EU is also willing to buy gas from Iran, as this would be a less difficult route and Russia may not object to it. He also stated that currently the EU Commission seems to be willing to engage in a gas partnership with Turkmenistan, despite the bad human rights records. According to him, the EU made a mistake when it did not allow Kazakhstan to join the neighbourhood policy. Dr Anceschi emphasised that it is clear, however, that Turkmenistan needs more energy partnerships, which creates a window for the EU to use its leverage as a gas buyer also for human rights issues.

The floor was then opened to questions and discussion. There was a discussion about the EU toning down its criticism towards Turkmenistan’s human rights policies and the OSCE’s role as a forum for criticism. There was also a question about Turkey’s role in Turkmenistan’s economy and whether it has any impact on the country’s policies. Dr Anceschi noted that Turkey’s economic importance cannot be compared to what it was before and that nowadays a great deal of work is done by Chinese companies. Other questions from the audience concerned for example the aforementioned protests – that according to Dr Anceschi were very small-scale but still significant, since word of them had got out – and Russia and Gazprom’s objection to the Trans-Caspian pipeline. 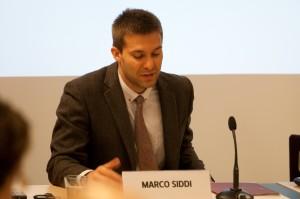 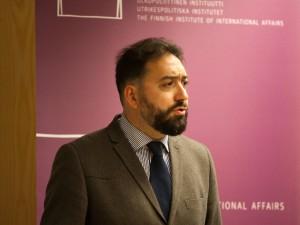