In recent months EU and Russia sent certain signals indicating that the parties may be willing to work together on the platform known as “Partnership for modernization”. In the wake of the bilateral summit in Rostov it is important to have an analytical look at whether it is, indeed, worth expecting a new breakthrough in the relations. There are certain positive changes in the general climate. Still, launching another “reset” will be difficult. Will the divergence in norms as well as political and economic conduct yet again prevail?
Speaker:
Arkady Moshes, Programme Director, Russia in the Regional and Global Context Research Programme, Finnish Institute of International Affairs
Chair:
Teija Tiilikainen, Director, Finnish Institute of International Affairs

Dr Teija Tiilikainen welcomed everyone to the seminar to discuss the EU-Russia relations and where the relations are heading after the Rostov summit.

Dr Arkady Moshes started by saying that for the last five years the relationship between EU and Russia has been stagnated. The Rostov summit was well below all the expectations. The expectations for the partnership modernisation were high, but the outcome was a two-page joint statement and a declaration. This result is not enough; also because the declaration cannot be instrumentalised. Dr. Moshes predicted that in the future we will see more of the same, and no “reset”. However, there are hopes that things would go towards a better direction.

Dr. Moshes discussed why after high hopes the summits always fail. He argued that there are different conceptual settings for EU and Russia. For Russia, EU is no longer a priority; now it has alternatives for the EU. Another thing is that, in spite of all, Russia’s modernisation is not there. There is a lot of debate about whether there is need to modernise or not. The debate goes on, but any decisions have not yet been taken. In Russia it is discussed whether the modernisation should be conducted together with the West. When making agreements with Russia, the engagement should be rule-based. What Russia now wants is deals, instead of treaties, because deals can always be revised or withdrawn. This can be seen in Russia’s attitude towards WTO. EU thinks that it can wait with Russia. In the EU-Russia relationship there is a dictatorship of process, not results. Dr. Moshes argued that in the process of negotiations there is no continuity. The parties discuss but the next step is discussion about a totally different thing, the purpose being to close the first and go ahead with another.

Dr. Moshes argued that besides the different conceptual setting in the EU-Russia relationship there is a different practical setting which is underlying the failures of the EU-Russia negotiations. The bureaucracy goes on and the problems go on whereupon the mutual problems grow bigger. Dr Moshes stated that issue of values is back on the agenda. The EU understands that it has to talk about the values to Russia and that the value-gap cannot be ignored. This though won’t make the interactions easier. Another practical problem between EU and Russia is economics. As long as Russia stays out of WTO, the agreement between the parties is not achievable. Corruption is getting worse. Russia’s position in the Transparency International’s Corruption Perceptions Index has gone down; in 2004 Russia’s position was 90, whereas in 2009 it is in the position of 146. In relation to energy issues there are more disagreements than agreements, e.g. on transit issues and Russia’s capability to produce as much energy as EU needs.

Dr. Moshes concluded that in the EU-Russia relations there are different conceptual and practical settings and very little confidence in each other. Expectations are premature. We are dealing with the same things, we are muddling through, but there won’t be any huge breakthroughs coming soon.

In the Q&A session, it was discussed whether the EU-Russia summits should be abolished. Dr. Moshes didn’t think so, but he suggested that the solution could be to have only one summit per year and more working meetings whenever necessary. There was also discussion about the elections in 2012. It was stated that the year will be very critical and nothing will happen before that. If Medvedev stays in power, he could have a chance to be a real leader. If Putin comes to power, he will be there for the next 12 years. There is, however, also a chance that there will be a third person that should be taken into account.

The effect of the Lisbon treaty was discussed. Dr Moshes stressed that it is up to EU to show what the effect of the treaty will be. The Lisbon treaty does not show up in Russian debates at the moment. It was noted that Russia has good bilateral relations with some of the EU countries, but also number of difficult ones. Dr. Moshes emphasised that bilateral relations do not compensate the EU-Russia relations. Also the question of EU’s soft power in Russia was raised from the audience. EU is viewed in a positive light in Russia, unlike NATO or the US. According to opinion polls the attitudes towards EU are mostly positive therefore EU’s soft power in Russia is huge. The EU-Russia relations were discussed also in broader international context and how the global changes affect the EU-Russia relationship in the future. It was pointed out that 10 years ago Russia’s world view was very clear. It saw that it had security threats in the South, economic challenges in the East and the only safe area was the West. Now in the time of multipolar world there is no stable or reliable relationship, only cooperation. In Russia some think that China should be the number one partner, while others think that they should come again closer to the West. 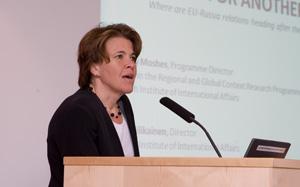 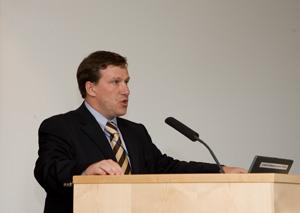 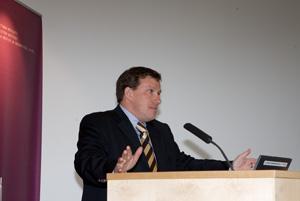 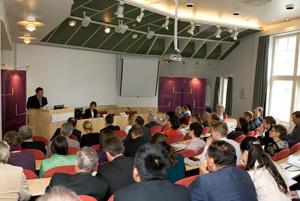