President Yeltsin stepped down almost ten years ago and was succeeded by President Putin. What has happened since then and what does the future look like? The former Prime Minister of Russia Mikhail Kasyanov analyses the political and societal developments in Russia in the 1990s as well as Russia’s current trends. What are the opportunities taken, lost and still on the table and what is the potential for the new wave of reforms in the country?

Mr Mikhail Kasyanov is the leader of the People’s Democratic Union. As a government minister he had an insider position during both Yeltsin’s and Putin’s presidencies. He was the Minister of Finance during the Yeltsin administration and then the Prime Minister during the Putin administration, from May 2000 to February 2004.

Dr. Arkady Moshes welcomed everyone to the seminar by saying that from the many anniversaries of this fall, seminar concentrates to the 10th anniversary of Boris Yeltsin’s resignation and the decade after him. The best speaker for this issue is Russia’s former Prime Minister Mikhail Kasyanov who was an insider in the cabinets in the late 1990’s as well as in the beginning of this decade and made successful reforms in Russia.

Mr. Mikhail Kasyanov started by notifying his pleasure to speak in the seminar. He began the presentation by stating that the years after Soviet Union’s collapse were difficult and lots of mistakes were made but many people strongly believed that the country moved into the right direction. Most of these mistakes were considered then as inevitable trade-offs on the way to democratic state and the system of market economy. After Yeltsin resigned, people from his inner cycle managed to ensure him that Putin is the right man for the task. There were only very few doubts towards him. The initial plan of economic and social reforms suggested by then Prime Minister Kasyanov and approved by president Putin looked impressive and challenging. During the president Putin’s first term in office list of reforms implemented or initiated included tax reform, land reform and pension reform. Unfortunately, a lot has changed since that time, stated Kasyanov. During the second Putin’s term all the institutes of democratic society in Russia were effectively demolished and replaced by their imitations. In the beginning of the decade, Russia enjoyed high economic growth, while running significant budget surplus and undertaking important reforms. Now the budget is deeply in the red, no reform takes place and the economy is contracting.

A lot of people with liberal views expected that after Russian presidential elections in 2008 that in fact turned into de facto appointment of Medvedev, liberal trends would start to reappear in Russian politics. But after year and a half of the new president’s term there is absolutely no sign that Medvedev’s nice words would ever turn into real action. In November Medvedev delivered his second address to the nation and described the problems in Russia; country’s dependency on natural resources, corruption and the poor state of infrastructure. It is evident that Putin’s model could not perform during the crisis and Medvedev’s evaluation was just a recognition forced by reality. While being very critical of the economy Medvedev spared no word of criticism neither of the political system nor the elections. He regarded existing political model as nearly perfect and quite efficient. In his speech he was in fact asking people to recognize his legitimacy as president and to support his half-modernization strategy. But Medvedev is viewed by most of his audience as no more than assistant to Putin and people cannot imagine him without Putin. Those, who thought that the crisis would pave the way for democratisation of the system as it happened in Gorbachev’s Soviet Union 20 years earlier, were mistaken.

Kasyanov criticized the West for being too soft on Russia. Recently we saw some attempts by the Western leaders to start cooperating with Kremlin on global issues like disarmament, Iran or Afghanistan. Russian authorities consider this willingness to cooperate only as a sign of weakness. It would be naive to expect that Russian authorities will easily get back on the track of mutual understanding with the country’s main partners. It will not happen because of the value gap. For instance, despite the fact that Russia did not perform properly under its obligations in the post-war Georgia, EU quickly lifted its moratorium on negotiating the new framework partnership and cooperation agreement. Both the EU and NATO softly returned to the ‘business as usual’ in its relations with Russia. Russian leaders were right to make a conclusion that there was no direct threat from the West to almost any kind of behaviour.

Now after a year of deep economic crisis, the situation in Russia looks almost the same. So far the authorities have been quite successful in managing the public mood. Social temperature is generally kept under control and political atmosphere is not that tense, as one could have imagined. Putin’s system proved to be fairly stable and it can last for at least several more years. But Putin’s power is based on intense propaganda and strong administrative machine rather than genuine political support. People are quite scared and therefore they are reluctant to struggle for their rights.

Kasyanov raised a question, if the system could somehow reform itself, but answered that there is no hope for that. Some people within the power system are very afraid of real freedom and competition and will not give them any chance. Others are wary of real criminal charges, which they will certainly face after the change of regime. Medvedev has no intention to really repair this system, and therefore there should be no hope that this system is able to reform itself.

But where would the inevitable change of the system come from, Kasyanov asked. One increasingly likely source is revolutionary disorder generated by mistakes of the present regime. The threat of Russia’s disintegration is closer to reality now than it ever was in 1990s when the issue was widely discussed. Northern Caucasus is a zone of permanent conflict. There are also some entirely new trends as well; the regional elites are starting seriously to think of Moscow as at best useless. Kasyanov believes that the catastrophic scenario can still be avoided. Positive developments can take place only if the system and its creators are faced with domestic and international pressure. This pressure might come from different angles: growing discontent of the people and moral pressure from the elites, economic and social problems intensified by corruption and mismanagement, and proper Western reaction to evident abuses of power and many violations of Russia’s international obligations. Russian liberals and real friends of Russia in the West should provide for this pressure. Only in this way we can alter Russia’s current trend, Kasyanov declared.

In the Q&A session, Kasyanov was asked how he would explain why Putin’s first term differed radically from his second term and when he thinks that the change took place. Kasyanov replied by stating that Putin used cynically the tragic event in Beslan in September 2004 to adopt changes in Constitution and legislation and to recreate the political system in Russia. All parties were forcefully pushed on reregistration and as a result there is no single independent political party with access to the elections. That was the turning point for the change.

There was a question about what Europe should do to show its disagreement towards the human rights situation in Russia. Europe should defend its principles and values and should not close its eyes from abuses of democratic institutions in Russia, Kasyanov replied. Russian constitution directly corresponds to all those chapters signed by the state as a Member of Council of Europe. It means that Europe have a right to remind Russian authorities that Russia is obliged to have free and democratic elections. To the question about when the economy of Russia could collapse, Mr Kasyanov answered that two factors could lead to the change; the first factor is the public pressure and the other is the moment, when the oil price falls down, so that the government can’t handle its budget deficit.

It was asked why it is difficult for Russian leaders to admit that NATO today is not the same as in the Soviet era. Mr. Kasyanov answered that NATO is not just a military alliance but it is union of countries with the same values and Russia should reform its country towards the same values in order to be a member of NATO. It is an issue of a value gap. NATO is not an enemy organisation for Russia but for the current Russian government it looks like that. The question of the sustainability of public finances in Russia in coming next years was raised from the audience. Mr. Kasyanov answered that the economy is in a really bad shape at the moment and the state finance will be in trouble. There are huge expenses and it has no ability to reform. Putin promised to increase the pensions by 40 percent but he just wants to buy the pensioners’ votes.

The issue about the elections in Russia and the voters prevailing apathy was discussed. Mr. Kasyanov said that the opposition has no ability to reach the public. The opposition has support in the big cities, where there is access to the internet, but in the remote areas people don’t know the issues as they have no alternative source of information. Kasyanov underlined that the system of elections should be re-established. The evolutionary change of Russian system is possible when people start to use democratic institutions (free and fair elections, freedom of press) for the control of political establishment. 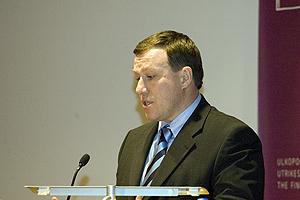 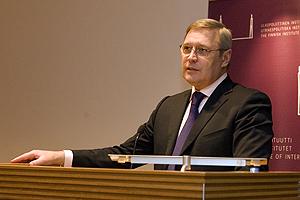 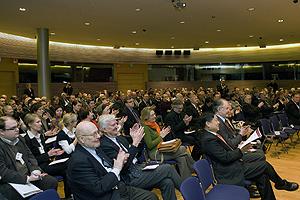