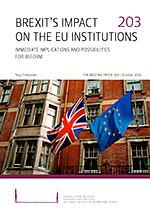 The direct implications of Brexit for the EU’s political system will be less significant than the indirect consequences, opening up possibilities for reform.

The treaty rules on a qualified majority in the Council might need to be reconsidered due to Brexit, which will also lead to a major reshuffle of the EU’s critical political groups in the European parliament after the 2019 EP elections.

The political pressure to consolidate the EMU in terms of strengthening its governance and its own fiscal capacity may grow as a part of the general reform process following on from Brexit.

If the treaties are reopened, principled amendments to the institutions and decision-making of the common foreign and security policy as well as further steps within the common security and defence policy are very likely to occur.

Any internal reform project shouldn’t compromise the unity and coherence of the EU any further, however, as it is currently highly exposed to both internal and external pressures.

The EU-Japan partnership: Stepping stone for a stronger presence in Asia?