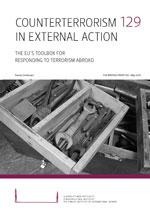 The Algerian hostage incident in January 2013 was a good example of the type of terrorism that Europeans are likely to face at the moment: the target was a multinational energy plant in the European neighbourhood, the motives were both political and economic, and the perpetrators were part of a global ideology, but acted in their local interests.

The EU did not take a political stance nor launch any of the crisis response arrangements during the hostage situation, although both France and the UK were active in the crisis and their citizens were at risk.

The European Security Strategy has named terrorism as one of the main threats to Europe and the objective is to address the threats abroad as well. This is being achieved through several horizontal tools and institutions that are dealing with terrorism either directly or indirectly. However, the structures are complex and bureaucratic, which demands a lot from coordination.

Hypothetically, the solidarity clause could also be used in some special crises in mobilising policing capabilities abroad in order to assist those EU member states that do not have such resources, but so far the clause has not been tested. Another option would be further integration regarding police forces and intelligence services.

Good bilateral relations are the best tool for preventing terrorism in the European neighbourhood. Special attention needs to be paid to the Euro-Mediterranean Partnership countries due to recent political change and armed conflicts that raise the risk level in the region.