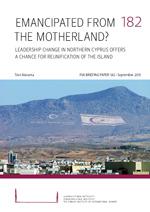 Since the 1974 division of Cyprus, the Turkish Republic of Northern Cyprus (TRNC), internationally recognized only by the Republic of Turkey, has been heavily dependent on Turkey, both economically and politically. This is a feature that became even more pronounced after the Republic of Cyprus joined the EU in 2004.

During the Islamic-conservative AKP regime in Turkey, the Turkey-TRNC relationship has witnessed two contradictory tendencies: first, from 2002 to 2004, encouragement for reunification, and subsequently, from 2005 onwards, a traditional nationalist stance accompanied by the AKP’s imposed Islamic-conservative social engineering project within the Turkish Cypriot community.

The election of Mustafa Akıncı, esteemed and trusted also by the Greeks, as the leader of the Turkish Cypriot community is a golden opportunity for the reunification of Cyprus. At a time of crucial reunification talks, the Turkish Cypriot community must re-evaluate its relationship not only with the Greek Cypriots but also with ”motherland” Turkey.

Turkey is currently witnessing a significant internal power struggle and unpredictability regarding the future, making it very difficult to evaluate how it would react in the event of a permanent agreement between the two Cypriot communities.