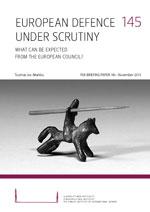 The decision to place security and defence policy on the agenda of the December European Council and the intensive pre-summit preparations have given renewed impetus to this policy area and raised the level of expectations ahead of the meeting.
While there is now widespread agreement among the member states on the main challenges facing the EU in the area of security and defence, conflicting political and economic interests still exist and continue to hamper the Union’s efforts.
The December summit is unlikely to engage in a major strategic debate, but it will discuss steps to improve the implementation of the Union’s security and defence policy, to enhance cooperation in the area of capabilities, and to support the European defence industry.
A major novelty is the European Commission’s stronger involvement, which remains controversial, however.
The most crucial task for the EU heads of state and government is to translate the momentum created by the pre-summit process into a lasting commitment on the part of all actors involved, by putting forward binding timelines, specific targets and concrete follow-up projects.
Kategorier:
Europeiska unionen säkerhets- och försvarspolitiken sv FIIA Briefing Paper