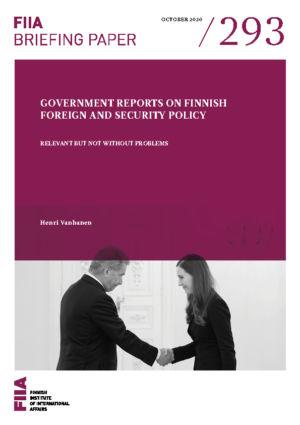 The government reports on foreign and security policy have become a well-established and recognized practice in which the Government of Finland issues a report generally once during the parliamentary term.

The reports can be regarded as comprehensive and strategic documents, whose purpose is to signal the strategic directions of Finland’s present and future policy for both domestic and foreign readers.

Regardless of the government reports’ institutionalized role in Finnish foreign and security policy practices, they are not without problems. The main issue with the current report process is linked to the quickly changing operational environment. Thus, a more frequent process such as an annual announcement on foreign and security policy to support the government reports should be considered.

The deepening Finnish-Swedish security and defence relationship: From operative cooperation to ‘strategic interoperability’?