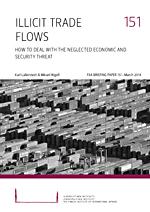 Illicit trade flows generate massive costs for the EU, yet the countermeasures have been inadequate. A shortage of data, the tendency to look at different forms of illicit trade as separate phenomena, and the complexity of the problem have led to an under-prioritisation of illicit trade among policymakers.

Globally, the illicit trade in products that replace those that are generally licit (such as counterfeit goods and contraband excise goods) represents the biggest monetary turnover and hurts government and corporate revenues directly. Still, it is particularly under-prioritised.

Synergistic effects for smuggling different items relate to the fact that there are over one thousand international poly-crime groups operating in the EU, the same smuggling routes can be used for different commodities, and the same corrupt officials or purveyors of false documentation can deliver their services to multiple ”operators”.

To address the problem, better data need to be generated showing its extent and impact. Taking a holistic view of the various aspects of illicit trade is important to facilitate coordination among the relevant authorities. The costs of this work represent investments which – beyond enhancing security – will generate income by boosting tax revenues, reducing crime, creating jobs and driving economic growth.