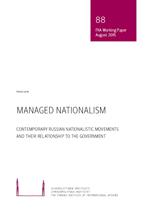 This paper argues that nationalist movements in Russia can have a certain role to play in the Kremlin’s management of nationalism in the country, despite the fact that they might promote a very different form of nationalism than the state leadership itself.

The aim is to show with the help of regime management theories that the existing nationalist movements are beneficial for the regime either by promoting values favourable to the regime or by forming a certain outlet for dissent, which is then easier for the regime to monitor. This does not mean that the movements selected for analysis couldn’t be self-sustainable and original, but the alternative they offer ideologically is rather shallow.

Additionally, the paper aims to show how the management of the selected example movements can help to define and draw the limits of state nationalism: which ideas are supported, which are repressed, and which perhaps replaced? By way of a conclusion, it is suggested that the selected example movements represent the vast field of contemporary Russian nationalism that is managed by the regime, which combines ethnic and civic features of nationalism and uses it as an ideological tool.

Putin’s reactive reforms: Unfavourable conditions are forcing the Kremlin to change the rules of the game