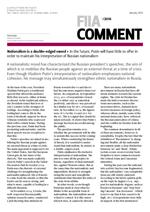 A nationalistic mood has characterized the Russian president’s speeches, the aim of which is to mobilize the Russian people against an external threat at a time of crisis. Even though Vladimir Putin’s interpretation of nationalism emphasizes national cohesion, his message may simultaneously strengthen ethnic nationalism in Russia.
Kategorier:
EU:s östra grannländer Ryssland sv FIIA Comment