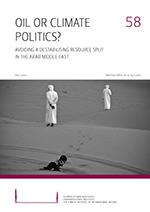 Despite clear indications regarding future negative impacts of climate change to the region, Arab states of the Middle East still do not perceive climate change as a threatening factor to their economic development and stability.

A clear division of perceived interest in the international climate change negotiations is distinguishable between Opec member states of the Gulf and other states. The Opec members’ focus on the stability and continuity of oil export revenues continues to override any concern over their vulnerability to climate change itself.

Such an approach ignores some of the key problems and threats potentially affecting the region as a result of accelerating climate change, and therefore paves the way to increased regional instability as well as further polarisation along economic lines.

Regional instability can also ensue in the case of a significant decline in the price of oil during the next decades if the oil exporting countries are not able to diversify into alternative sources of income.

As a first step to avoiding a polarisation of interests that would block prospects for future cooperation, the oil exporting monarchies should seek a more balanced approach to international action on climate change. Other steps include recognising the synergies between domestic mitigation and energy security and alternative energy technologies and diversification, and increasing capacity building in the resource poorer states.