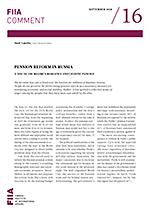 The Kremlin has cast a cloud over the horizon for millions of Russian citizens. People do not perceive the forthcoming pension reform as a necessary measure for sustaining economic and social stability. Rather, it has ignited a collective sense of anger among the people that they have been cast adrift by the elite.

The persistence of Putin's Russia: Why don't Russians demand more?