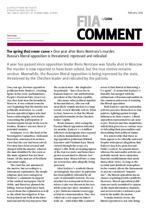 A year has passed since opposition leader Boris Nemtsov was fatally shot in Moscow. The murder is now reported to have been solved, but the true motive remains unclear. Meanwhile, the Russian liberal opposition is being repressed by the state, threatened by the Chechen leader and ridiculed by the patriots.