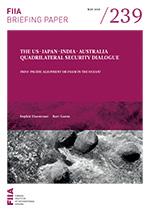 In late 2017 the US, Japan, India and Australia re-launched the Quadrilateral Security Dialogue, commonly referred to as “the Quad”, marking the revival of a grouping in place during 2007–2008. The move received widespread attention, but was also strongly criticized as a potential anti-China alliance.

The underlying motivations, levels of engagement, and views of the Quad as a possible instrument to balance against a strengthening Chinese role in the Indo-Pacific region vary for each of the grouping’s members.

In spite of converging interests among the Quad’s members, the tangible risk of provoking China, the unsteady normative foundations of the grouping, the unpredictable impact of domestic politics, and the symbolic signal the formation of the group sends towards Beijing are all factors preventing a serious revival of the Quad.