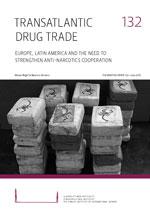 The cocaine business has changed significantly in recent years. Once concentrated in Colombia, it has now expanded to the entire Latin American region with Brazil, Mexico, Central America, and Venezuela having become central corridors for the illegal traffic.

The cocaine enters Europe mainly by exploiting the legitimate container trade. Most shipments continue to be directed to Western Europe, but recently the illicit trade has been expanding eastward with new entry points opening up in the Black Sea and Balkan area. There are also indications of a possible new entry point in the Eastern Baltic Sea area.

Not only are Latin American criminal organizations expanding their activities on the European drug market, but they are also exploiting the European financial crisis to launder their profits and move into other branches of the economy.

The growing transatlantic cocaine trade calls for improving inter-regional counter-narcotics cooperation. Concrete steps should be taken to promote stronger links between anti-drugs programmes, development cooperation and public security policies on both sides of the Atlantic.