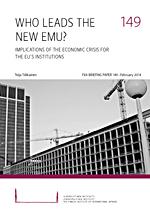 Reforms made to the EU’s economic and fiscal policies have served to reinforce the fragmentation of the division of competences between the EU and its member states in this field. It has also impacted the way in which these competences are exerted by the European and national institutions.

Resulting from a differentiation of responsibilities between the eurozone countries and the rest of the EU, fragmentation is increasingly taking place even inside the EU institutions. The current fragmentation of competences and institutions complicates the democratic scrutiny of economic and fiscal policies.

The biggest challenge is to accommodate the differentiated responsibilities of the Eurozone countries and the rest of the EU within the framework of existing institutions in a way that would ensure the unity of this framework, but also the proper democratic anchoring of the EU’s economic and fiscal powers.