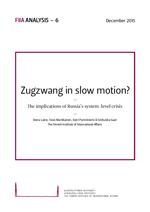 The upsurge in Russia’s foreign political and military activity should be understood and analysed as a reaction to several internal and external setbacks that the Russian system has suffered in recent years. As a response to these multiple challenges, the Russian leadership has switched on a crisis mode that legitimises exceptional measures in both foreign and domestic policy.
Domestically, this mode has meant ‘internal mobilisation’: the creation of enemy images, assertive patriotism, growing isolationism, tighter control and more aggressive use of information resources. In the name of national unity, only the dominant version of patriotism is accepted while others are easily branded as ‘fifth column’ or ‘foreign agents’.
While the internal mobilisation and portrayal of Russia as a ‘besieged fortress’ seem to have improved the system’s resilience in the short term, the underlying systemic problems remain unresolved. Adding to the problem is the nature of the Russian system: instead of formal political institutions, it relies on unofficial networks of power that sustain and support the system but simultaneously limit its powers and restrict its capability to reform. As a result, the system is unable to solve the long-term structural problems it is facing.
Not only is the Russian system in crisis, but more precisely, it uses and instrumentalises the crisis mode in order to legitimise and secure its power. As the system is currently unable to provide Russians with increasing standards of living, protecting them from an outside threat has become the system’s main source of legitimacy. Uncertainty and a crisis atmosphere are therefore not a phase Russia is going through but rather a more permanent feature that the regime needs in order to maintain its popularity and power.
The political passiveness combined with the popular resonance of the isolationist discourse and the effective elimination of any viable alternatives to the regime indicate that the leadership will be able to hold on to its power for the time being. However, the systemic problems will remain unresolved and will gradually worsen. This dilemma is what this paper has dubbed ‘zugzwang in slow motion’.
Kategorier:
Demokrati Ryssland sv FIIA Analysis