Opening remarks and comments:
Carl Haglund, Minister of Defence of Finland
Mr. Haglund is the Minister of Defence of Finland since 2012. He is also the leader of The Swedish People’s Party. Mr. Haglund was a Member of the European Parliament in 2009-2012. He holds a Master of Science degree in Economic and Business Administration.
Speaker:
Daniel Hamilton, Director of the Center for Transatlantic Relations at the Paul H. Nitze School of Advanced International Studies (SAIS), Johns Hopkins University
Dr. Hamilton is the Austrian Marshall Plan Foundation Professor at Johns Hopkins University’s School of Advanced International Studies (SAIS), and Director of its Center for Transatlantic Relations. He also serves as Executive Director of the American Consortium for EU Studies. He has served as the U.S. Deputy Assistant Secretary of State, with responsibilities for U.S. relations with Nordic-Baltic countries; and Associate Director of the Policy Planning Staff for two Secretaries of State. He has recently published a book titled ‘Advancing U.S.-Nordic-Baltic Security Cooperation’, which includes practical recommendations for decision-makers. The book addresses questions like: What is the current security situation in the Nordic-Baltic area? What might be the role of the United States? In what ways can and should US-Nordic-Baltic cooperation be strengthened?
Chair: Teija Tiilikainen, Director of the Finnish Institute of International Affairs
Summary of the seminar:

The seminar was opened by its chair Dr Teija Tiilikainen who stressed the topicality of the seminar due to the current crisis in Ukraine. According to her, an analysis of its implications on security and how the crisis affects different actors in the area has not yet been completed. Questions such as will there be changes in defence policy in Nordic or Baltic countries and will the crisis have implications on transatlantic relations are particularly topical at the moment.

First, the floor was given to the Minister of Defence of Finland, Carl Haglund, who in his speech focused on the impact of the current events on Finland’s security and defence policy, and also on what kind of effects they have on NATO and the EU. He began by saying that Northern Europe has experienced decades of peace and that the developments of the Ukrainian crisis came as a surprise for Finland. Retrospectively thinking it should have been expected, but the negative transformation of Russia has been underestimated while the focus has largely been on positive developments. Minister Haglund stated that the Ukrainian situation has long-term effects. At the moment there is a ceasefire, which is of course a positive sign, but the arrangements in Eastern Ukraine are still worrying and rather impalpable. For Europe, Crimea is the most difficult part of the crisis and its handling must be considered carefully. It does not seem likely that Russia will give up on Crimea and this cannot be accepted by the EU or the US, which means that the sanctions must be retained.  Minister Haglund noted that there are also other crisis situations ongoing around the world: for instance the civil war in Syria, ISIS, problems in Gaza and Northern Africa.

The NATO summit that concentrated on the crisis of Ukraine and its implications to the countries had a very positive outcome, at least from the Finnish perspective: the partnership will be deepened, although before the summit there was a concern that due to the current events cooperation would diminish. Minister Haglund reckoned, however, that Finland is not joining NATO in the near future since this would require a stronger public support.

Minister Haglund also evaluated the implication of the current crisis on the EU’s foreign and security policy. The EU and the NATO have different roles and the importance of the EU security and defence cooperation has not increased, even when the crisis in Ukraine started. According to Minister Haglund the reason is that the EU countries that are members of NATO are not interested to develop EU defence policy. In general, according to Minister Haglund, there have been positive developments in the EU’s foreign and security policy during the past ten years.

To conclude, Minister Haglund stressed that Nordic-Baltic cooperation will be enhanced in the future. Finland must also take into account Finland’s history as Russia’s geographical neighbour – which means that smart foreign and defence policies are needed. Domestic defence policy will be developed in cooperation with Nordic, Baltic and EU countries.

The second speaker, Professor Daniel Hamilton, concentrated on explaining the findings of the recently published book ”Advancing U.S.–Nordic–Baltic Security cooperation”.  According to him the US is interested in cooperating with the Nordic and Baltic countries, because this relationship is a value added relationship – the relationship is advantageous to both sides. For two reasons there is urgency for this particular relationship: firstly, the idea of an era of calm and peacefulness that started after the end of the Cold War has dramatically changed recently, and secondly, there are significant changes going on in the Arctic. Recent developments mean that the post-Soviet succession continues and significant turbulence exists.  According to Prof. Hamilton the situation in Ukraine is rather a symptom of the post-Soviet succession than an episode that is passing by. Prof. Hamilton stressed that this is not a black and white situation, and in reality the challenge is the increasing ‘twilight’ zone between the East and the West.

Lastly, Prof. Hamilton mentioned the Transatlantic Trade and Investment Partnership (TTIP). Although TTIP is seen primary as an economical agreement, it has a geopolitical aspect, and in this sense the free-trade agreement is related to security issues and should be mentioned in this context. 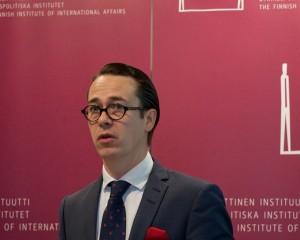 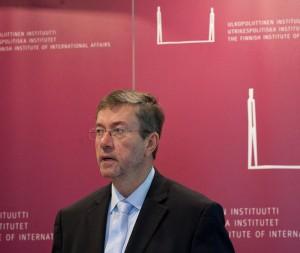 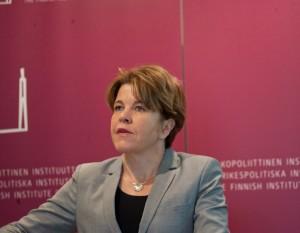