The Arctic region is going to emerge as a global reserve of energy resources and a global transport corridor. The integration of the Arctic maritime resources and flows into the global circulation of goods, resources, and power is going to change the nature of the region. The regional states and outside major powers are drawn into the economic and political competition. This will influence the existing institutional structures of the region that were developed to regulate and govern a very different Arctic region. The seminar will cover the key challenges from the perspective of key players in the European High North. Will Russia dominate the Northern Sea Route? What role does the Arctic region play in Russia’s geostrategy and geo-economy? How does the European Union envision its own role in the Arctic? How is China’s Arctic strategy developing?

The seminar was opened by programme director Mika Aaltola. He expressed his gratitude for having Dr Stephen Blank, Research Professor of National Security Affairs at the US Army War College, at FIIA already for the second time.

Dr Blank presented his views about the Arctic and its effects for the international security. His presentation did not reflect an official opinion of the U.S. Government or the army but his own. According to Dr Blank, in the US arctic issues are being discussed in think-tanks, but not yet by the Government.

The Arctic has been a coming global security issue five or six years, and there are certain forces driving it. The main point that Dr Blank made was that people have think about the Arctic in a new way. Most of the discussion about the Arctic has been made in the Arctic Council, Western European countries, the US, Canada or Russia. However, the Arctic is no longer just a European issue. Recently, Asian countries have entered the discussion and the agenda has changed into a truly global one. There are similarities between the situation in the Arctic and in the South China Sea. The Arctic used to be primarily a strategic naval during the cold war, but now it is having a larger role as a commercial maritime route, a source for energy, and a part of the Asian security agenda.

Dr Blank introduced four factors that are driving the change in the discussion about the Arctic on the European and North-American side. First, there is climate change that is making it possible to expand the use of the Arctic as a commercial transport passage, the Europe-Asia highway. It will still be a difficult and dangerous place to operate as it is at the moment, but less dangerous and difficult all the time. The costs of the trans-continental shipping decrease as the Arctic becomes more navigable, the risks become more manageable, and the importance of the Arctic route will increase. Second factor is the United Nations Convention on the Law of the Sea (UNCLOS) that stimulated the change by inquiring the states to file their claims to the economic exclusions provided by the UNCLOS. Russia has already been making its own claims. However, the US hasn’t signed the UNCLOS treaty. Third factor is that there is an enormous amount of hydrocarbons and other minerals in the Arctic Ocean, as was revealed in the US Government geological survey of 2006. The fourth factor is that Russia has stated the Arctic as a vital state interest.

The Russian view is a paradoxical one. Russia has recognized the strategic importance of the Arctic but does not have the capital, the labour force or the technology to exploit the natural resources. Russia would need help from other states, but at the same time it sees them as a threat. Russia is making an effort to establish relationships with large foreign oil companies and at the same time president Vladimir Putin is talking about securitization, or even the militarization, of the Arctic.
In Asia, the same factors are driving the debate about the Arctic as in Europe. There is an enormous need for energy because of the rise of China and the other East-Asian countries as the most dynamic region of the global economy. Also, there are multiple security challenges taking place in the East-Asia. The set of issues is similar in the South China Sea as in the Arctic, but the role China plays in the South China Sea is the opposite than its role in the Arctic – and vice versa for Russia.

India has a lot at stake in the Arctic as well. With its massive lack of energy supply, India is trying to find all possible energy sources, but it’s risking to lose for China in the race. However, India has been negotiating with Russia about energy exploration in Sakhalin.

To conclude his presentation professor Blank repeated that the Arctic is not going to be an issue only for the members of the Arctic Council, but a global challenge. It’s clear that Russia wants to have a major role in the Arctic, but it also needs foreign companies to help.

Questions and discussion after the keynote speaker mainly focused on Gazprom and Russian energy policy and the US role in the Arctic.

Katri Pynnöniemi focused on few important points in her comment. Russia does not have resources to pursue what it sees as a vital state interest. Instead of asking help, it’s going through the rhetoric of securitization and militarization. Even if the importance of the Arctic is recognized in Russia, the administration managing the Northern Sea route has not developed enough during the past ten years. The infrastructure in the Russian Arctic must be developed. Russia’s Arctic strategy shows that Russia is vulnerable and it has to have the state present in the Arctic. The climate change and the areas that are now covered with permafrost are a big challenge for the development of the infrastructure.

Jyrki Kallio first raised the question about the maritime centred view of the Arctic. The Arctic is also a land area that is quite often forgotten in the discussion. It is a home for people, also for the indigenous people. China doesn’t have an Arctic strategy and it is still not very high in China’s agenda. Even if China is already present in the Arctic, it has more presence in the Antarctic at the moment. China is interested in the fishery and the energy resources of the Arctic. It will be very interesting to see what will be China’s approach to the Arctic when it will make an Arctic strategy.

Finally, Dr Blank reminded that any attempt to establish a comprehensive understanding for policy purposes between the states, have to keep in mind all the different issues of the Arctic: environmental issues, terrestrial issues and naval and maritime issues. It’s important to have one Arctic Council and not two or more competing councils.

Questions and discussion in the end of the seminar were focused mostly in the climate change and environmental questions, as well as maritime rights and naval issues. 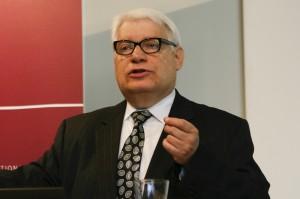