Lotta Numminen graduated with a M.Sc. in Geography from the University of Helsinki, and is in the process of completing her doctoral dissertation at the same university. Since February 2008, Ms. Numminen has been working as a researcher at the Finnish Institute of international Affairs. Her research focuses on the emerging nature of the Arctic’s political agenda and the governance of the region.

Arild Moe is presently Deputy Director and Senior Research Fellow at the Fridtjof Nansen Institute. He has a cand-polit degree from the University of Oslo with political science, Russian language and public law. His research interests include: The Russian energy sector, in particular the oil and gas industry; the regional dimension in the Russian petroleum sector; offshore activities in the Barents Sea; Russian climate politics; oil companies and corporate social responsibility. He has also studied Arctic policy issues.

Comments:
Dr. Lassi Heininen, Adjunct Professor (Docent), University of Lapland
Dr. Heininen is a University Lecturer and Adjunct Professor (Docent) at the Faculty of Social Sciences, University of Lapland. He has taught in a number of countries, published widely, and is Chairman of the Steering Committee of the Northern Research Forum. His research fields include International Relations, Geopolitics, Security Studies, Environmental Politics, European and Russian Studies, and Northern Studies.

Dr. Anna Korppoo opened the seminar “Arctic Resource Policies in Russia” by offering welcoming remarks to the approximately 75 guests and media representatives who participated in the seminar.

Ms. Lotta Numminen focused her presentation on what she calls “national interest versus the common good”. Melting of the sea ice, regional stability, a need for diversification of global energy supplies, and new technologies make the Arctic energy reserves accessible more easily and thus commercially more attractive than before. According to Ms. Numminen, the Arctic Council, the Ilulissat Declaration, and The UN Convention on the Law of the Sea represent the “common good”. Ms. Numminen offered examples on the protection of national interests of Russia. Russia has claimed the continental shelf from the UN Commission on the Limitations of the Continental Shelf. A new emphasis has emerged on national control in the Russian energy sector: a new law indicates that the developing of the Arctic resources will be conducted by Russian state-run companies. The Russian Duma is preparing legislation that will define the northern sea route as Russian domain. Due to these national interests, Russia has increased its military actions in the Arctic. Ms. Numminen is of the opinion that these military actions are related to Russia’s more assertive foreign policy. In the coming years, Russia will have to decide if it wants to cooperate with the other Arctic states on resource exploitation. The greatest challenge for energy development in the Arctic is thus to find a balance between national interest and the “common good”.

Mr. Arild Moe offered in his presentation perspectives on the development of Russia’s northern offshore energy resources and discussed Russian petroleum activity in the Barents Sea. The area has huge amounts of hydrocarbon resources but the conditions are challenging. There have been new plans in Russia concerning the Shtokman. The official plan is to start pipeline gas export in 2013. Mr. Moe is of the opinion that the plan is not realistic. The oil supplies in West Siberia are in decline and Russia needs new capacity within 10 years. The institutional framework has improved but there is less room for foreign companies. Offshore digging is reserved for state companies. Russian shipbuilding and offshore construction are in crisis. The two options are: development will be delayed or foreign companies will assume a larger role.

No drilling has been carried out in the disputed area of the Barents Sea. Russia and Norway are in dispute over the matter, but not in conflict. Negotiations between the two countries will show whether a firm borderline will be established or whether the countries will cooperate on the issue.

Russians already have a right to their area in the Arctic; they do not need to claim it. But they may have a right to a larger area if they can prove that the continental shelf is a continuation of Russian territory. So far, Russia has played by the rules. But Russia has weaknesses in its scientific capacity to substantiate the claim for the shelf. Mr. Moe believes that there is a potential for a long term conflict but no resource race is to be expected in the coming decades.

Dr. Lassi Heininen agreed with the previous speakers that the theme is very current. However, he was concerned that we might be losing the bigger picture. According to Mr Heininen, it is important for Russia that its fleet has access to the sea via northern seas. Moreover, it is true that Russia and Norway have common interest in the Arctic, but the military interest has been there for decades. The US and Russia hold on to their military readiness in the region. None of this information is very new but the media likes to overreact. Mr. Heininen pointed out that international cooperation over the Arctic is mostly multilateral; Russia is not working in a unilateral way. He agreed with Ms. Numminen and Mr. Moe that Russia is playing by the rules. Russia knows that it cannot act alone in exploring the Arctic. But one must remember that the Russians are nevertheless exploring the West Siberia. Finally, Mr. Heininen said that there is a global interest for the energy resources in the Arctic because of energy security. Two development directions are possible: competition over Arctic resources will continue and other Non-Arctic states such as China may join in on it. Alternatively, we are moving towards the “common good” (e.g. the Law of the Sea). The main question is how the USA will act. The Arctic Council is in its current form weak and unable to talk about politically more sensitive issues.

In the Q&A session the audience was interested in Finland’s policy towards the Arctic and who is responsible for it. To this, Ms. Numminen answered that there isn’t any policy at the moment. Finland’s interests lie, for example, in the infrastructure in Lapland and the possible railway between Rovaniemi and Murmansk. The ministry of foreign affairs is responsible for Finland’s Arctic policy.

The audience asked about energy safety in Europe and the role of Gazprom’s financing. Mr. Moe answered that Gazprom is indeed under investigation and that it is important to bring at least some safety into the energy delivery. Mr. Heininen said that in relation to petropower, the West Siberia is Russia’s priority at the moment. Mr. Heininen believes that it would be good if Finland had a plan over the Arctic because if there is none, Lapland will be interested in making its own plan. The audience was also interested in the role of commercial navigation, Nordstream, the EU’s policy towards the Arctic, and the relations between Russia and the USA over the Arctic. There was a question on the readiness to respond to a potential oil catastrofy in the area.

Ms. Numminen answered that the EU will apply an observer status in the Arctic Council and it has shown interest towards the Arctic. The EU could also influence through its member states such as Finland.

Ms. Numminen suggested that Nordic militaries could join maritime safety in cooperation with civic organizations in the event of an oil spill. Mr. Heininen pointed out that the Arctic Council plays an important role in developing readiness for oil spills. Mr. Moe believes that Nordstream is going to materialize despite all its current problems. 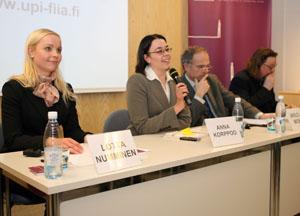 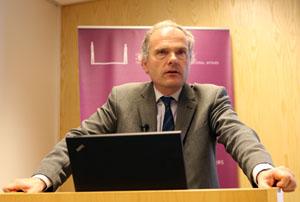 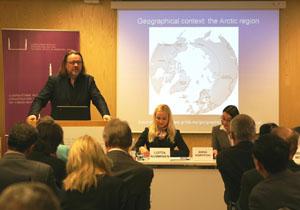 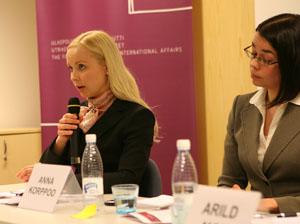 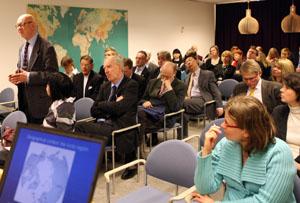 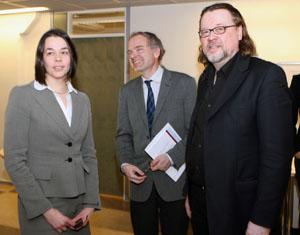 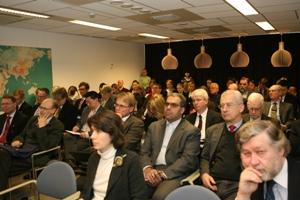