etusivu / Tapahtumat / Are Icelanders not good Europeans?
jaa
jaa
In the spring, the Icelandic government backtracked on its resolution for the national parliament to quit the EU accession process altogether. It put the 2009 EU membership application on hold when it took office in 2013. The resolution met fierce opposition and around 22 per cent of voters signed a petition to the assembly to halt action on withdrawing the EU application and hold a popular referendum instead on whether to complete the entry negotiations. The pro-European forces have gained ground with reactions to the government’s proposal to withdraw the membership application. The EU debate had never been livelier than in spring 2014. The government faces a big decision on whether or not to reinstate the resolution during this parliamentary term. The seminar seeks to explain why most of the Icelandic political elite remains highly sceptical on the question of EU membership and the 2008 financial crash did not itself transform or significantly adapt the Icelandic political parties’ long-term European policy goals.
Speaker:
Baldur Thorhallsson, Professor, University of Iceland
Baldur Thorhallsson is Professor of Political Science and Jean Monnet Chair in European Studies at the Faculty of Political Science at the University of Iceland. He is also (from July 2014) the Head of Faculty of Political Science at the University of Iceland. His research focus is primarily on small state studies, European integration and Iceland’s domestic and foreign policy. He has published extensively in international journals. He holds a PhD (1999) and MA (1994) in Political Science from the University of Essex.
Comments:
Jukka Salovaara, Director General, Ministry for Foreign Affairs of Finland
Juha Jokela, Programme Director, the Finnish Institute of International Affairs
Chair: Harri Mikkola, Senior Research Fellow, the Finnish Institute of International Affairs
Summary of the seminar:
Acting as a chair instead of Mika Aaltola was Harri Mikkola, Senior Research Fellow at FIIA, opened the seminar describing shortly the lively debate going on in the Iceland about membership of the European Union. He then introduced the speakers.

Baldur Thorhallsson, Professor at the University of Iceland, began his presentation with a brief historical overview of Iceland, from its joining EFTA to its membership application to EU in 2009 which was frozen in 2013 and then proposed by the government to be withdrawn. He noted that both political elite and voters have changed their attitudes towards the membership of EU, although not necessary in unison, during the last decades. Regarding the withdrawal of the membership application, Thorhallsson pointed out that currently 7 out of 10 voters in Iceland want to complete the accession process and have a referendum about the membership.

The reluctance of Iceland concerning the membership of the EU can be, according to Thorhallson, explained by five factors. First is the strong ideology of self-determination that is important part of Icelandic identity and associated with control of land, water and resources. The historical narrative in Iceland emphasizes prosperity during independence, domestic vs foreign rule in history, and the idea that ‘we are on our own’. Second is Iceland’s geographical location, and self-image related to the secluded location. Iceland has a very realist concept of foreign policy, with strong nationalistic discourse because of both homogeneity and geographical isolation.

Third factor, according to Thorhallson, are the concrete economic advantages. In the post war period, Iceland did not participate in international cooperation without direct economic benefits, and insists on absolute control of its national resources. Thus the membership of the EU is valued in economic, not in political terms. Security politics are also a factor, with Iceland having in the past relied on US to provide its security and economic assistance. The present government does not see any need to turn to the EU for security and defence since the country has a bilateral defence treaty with the US. The fifth factor, mentioned by Thorhallson, is small public administration that has been dependent on interest groups such as the powerful fisheries and the agrarian lobby, and has lacked emphasis on long-term policy making.

Thorhallson ended his presentation by summing up that Icelanders can be seen as good Europeans because they share the European values, and not so good because of their unwillingness to participate in the integration.

At the start of his comment Jukka Salovaara, Director General at the Ministry for Foreign Affairs of Finland, reminded that Finland was the firm supporter of Iceland’s membership application. He then compared Iceland’s case to Finland, mentioning economic reasons and being neighbor to Russia as some of the key reasons for Finland to join the EU. Regarding the option of just remaining a member of the EEA he noted that in Finland it was seen as an option that wouldn’t allow the same participation to the decision making that membership of the EU allowed. He also reminded that it is important to note that the membership completely changes the way how politics are managed in the country, however Salovaara pointed out that this hasn’t meant that the small countries couldn’t impact EU policies, quite contrary as shown for example by Luxembourg.

Juha Jokela, Programme Director at FIIA, questioned at the beginning of his comment whether EU equals Europe, reminding that Iceland is already culturally and institutionally very European even if it’s not member of the Union. He then focused on the phenomenon of differentiated integration that is currently much discussed in Europe, pointing out that it might be now somewhat more difficult to become a member of inner circles of the integration – the EU and Eurozone – as EU seem to be preoccupied with major reforms and management of internal dividing lines.

Regarding the security policy and the clear shelter provided by US, Jokela mentioned that the message from Washington to Europe seems to be that European are expected to take more responsibility for their own as well as their neighborhood’s security, even if the US also voiced its continuing commitment to the European security and NATO. Jokela wondered whether the suggested shift of US strategic focus towards Asia, is present in security policy discussions in Iceland. Relatedly, he pondered whether Nordic defence cooperation is featuring in Icelandic debates. 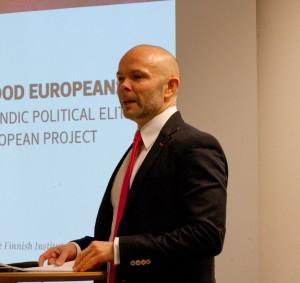 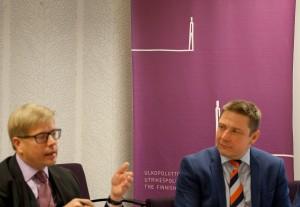